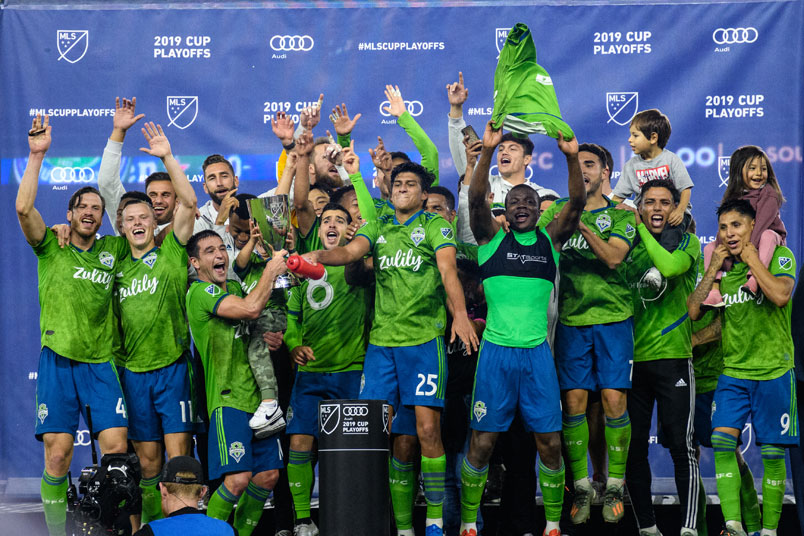 By Clemente Lisi – NEW YORK, NY (Nov 4, 2019) US Soccer Players – Were these the best MLS Cup Playoffs in league history? It’s always easy to lean to the present for hyperbole. In this case, however, it may prove true. Better players, stronger coaching, and a revamped format all certainly helped. The one-and-done playoff format contributed to a greater sense of urgency. The home-field advantage rewarded teams for a better regular season.

So what kind of MLS Cup Final can we expect? All finals have that sense of urgency to them, but that doesn’t necessarily make them good. Last season’s Champions League final, won by Liverpool over Tottenham, is a great recent example of this phenomenon. In general, MLS Cups have been entertaining contests. Given what we’ve seen this Fall, the Seattle Sounders vs Toronto FC could be something special.

Winning at home in the playoffs proved difficult for both of the regular season conference champions. For Seattle, coach Brian Schmetzer is finally getting the accolades his record deserves. This is a coach who not only implements a system that works best for his players, but he’s willing to adapt his tactics based on who’s available and the opponent. That may sound obvious, but it’s not exactly the norm in this game.

That flexibility, so rarely seen around the soccer world, has paid off over the last few seasons. Seattle has played in MLS Cup three of the last four years. This occurred all under Schmetzer, who likes to play a 4-2-3-1 that can become a 5-3-2. That flexibility, needed either to preserve a lead or get a goal, allows Seattle to succeed in high-pressure games. It’s why they generally have a strong regular season and even better postseason. It’s what led to Seattle’s 3-1 road win against LAFC. The Seattle attack, spearheaded by Nicolas Loderio, has impressed. In the playoffs, Jordan Morris has proven he’s a real talent and clutch in big games. His three goals, tied with teammate Raul Ruidiaz, is the most so far in the MLS Cup Playoffs.

Seattle will face Toronto FC in the Nov. 10 final at a sold-out CenturyLink Field. That Seattle and Toronto meet for the third time in the championship game in just four years means there’s already a rivalry. Seattle won in 2016, Toronto a year later.

Like Seattle, Toronto won on the road after defending champion Atlanta United FC 2-1 in the Eastern Conference Final. It was another shock result. Similar to Schmetzer, Toronto coach Greg Vanney also uses a 4-2-3-1 that relies on speed to move the ball forward. It can take the shape of a 5-4-1 with a higher line or a 4-4-1-1, depending on the situation. It allows TFC to remain strong offensively while also making the backline impenetrable.

The offense has looked rather impressive with Jozy Altidore and Alejandro Pozuelo, who has allowed fans to forget about Sebastian Giovinco. Like Seattle, Toronto started the season strong but fell into a malaise over the summer. They picked it back up late in the season to lock a spot into the playoffs.

Parallels between Seattle and Toronto don’t end there. Both coaches would love to have the ball more and let their respective offenses run wild. Nonetheless, this is a game with a trophy on the line. A strong defense and midfield duels could result in a stalemate. We saw that in 2016. The hope, as always, is for the kind of free-flowing soccer that works as a commercial for the league. Tactically, that may be what we’ll get. Both teams, after all, are healthy and loaded with confidence. Which team will be most aggressive offensively? Again, the signs point to both.

This year’s MLS Cup Final is the “spoiler version”. The absence of LAFC and Atlanta show the unpredictability of the playoffs along with the league’s well known parity at least among the teams willing to spend. Underdog vs underdog tells a different story, but it’s no less important for determining where this league is in 2019. These are two very strong teams that deserved to get here. The teams are evenly matched and feature their share of superstars. The ingredients are all there for a final to remember.