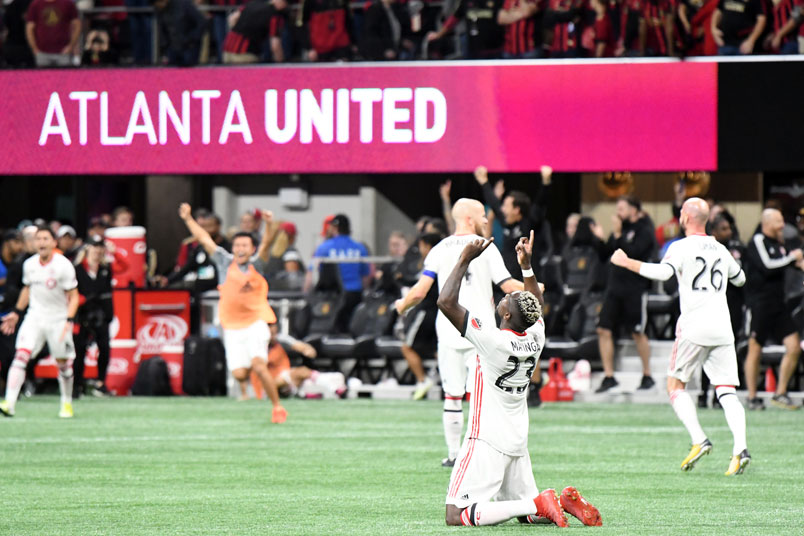 By Jason Davis – WASHINGTON, DC (Nov 1, 2019) US Soccer Players – Not that long ago, we considered the possibility of a Seattle Sounders versus Toronto FC matchup in the 2019 MLS Cup final in this very space. At the time, that possibility seemed remote. Neither team held favored status heading into their respective conference finals. The club they’d face were easy picks as the league’s clear best. Perhaps one of them might spring an upset, but it was difficult to see both prevailing on the road in two of the toughest environments in the MLS.

Whatever the odds, it happened. Seattle knocked off the top team in the regular season in LA on Tuesday night. Toronto took down Atlanta United at Mercedes-Benz Stadium on Wednesday. The two teams won in very different ways, but the result is that Seattle and Toronto will face off for a championship for the third time in four years.

In Major League Soccer’s relatively short history, nothing like that has ever happened before. Two different clubs have played three times with the big trophy on the line, but not in so short a span. That the Sounders and TFC are again at this stage so soon speaks to the excellence of their organizations and the randomness of the MLS Cup playoffs.

Playoffs by nature are chaotic. The accomplishments of LAFC would be enough in most leagues around the world to secure the club a championship and end any debate over the best team in MLS history. 72 points and a +48 goal differential speaks to the dominance of Bob Bradley’s team.

In the 90 minutes of the Western Conference final, the Sounders stymied LAFC’s attack and used the clinical finishing of a pair of South Americans to prevail. It wasn’t a fluke. Brian Schmetzer’s plan, one that maximized the chances of victory but relied on more than a little chance, pushed the Sounders into the title game.

The Sounders played with compact lines to limit the space available to LAFC between the midfielder and defense, forcing the Supporters ‘Shield winners to break Seattle down. Schmetzer’s team also set a physical tone, as evidenced by notable collisions between LAFC star Carlos Vela and Xavier Arreaga, the Sounders center back. Arreaga took a risk, perhaps counting on the more lenient officiating that comes with the playoff season, and knocked Vela off his game.

For those of us who picked LAFC to march to the final and lift the trophy, the effectiveness of the Sounders plan put lie to the idea that “favorites” really exist in MLS. The league is changing. A few smart, ambitious clubs have separated themselves, but the gap can only get so big.

Seattle always had the talent necessary to get the job done. They also had a coach smart enough to enact the right plan. Schmetzer is now getting a massive boost in recognition, deserved after stewarding the Sounders to three MLS Cup finals.

Thanks to the result on Wednesday, Seattle will host the final. Ten years after launching into MLS with massive crowds and a supporters culture unique to American soccer at the time, the Sounders will put on the marquee event of the season in front of the home fans.

If the secondary market is any indication, tickets for the game are in heavy demand. Atlanta stole the spotlight last season, but this year’s championship game is a reminder that Seattle remains one of the best soccer markets in the country. They still Sounders draw better than all but a handful of teams in this part of the world.

Investor/operator Adrian Hanauer has already committed to opening the whole of CenturyLink Field for the MLS Cup final. It’s likely more than 68,000 fans will be on hand to witness the game. That won’t break the record set in Atlanta last year, but it’s a proper setting. Seattle, after all, set the tone for big crowds going to MLS games. Seattle didn’t invent Atlanta, just to be clear. However, without Seattle, there probably isn’t an Atlanta.

The visitors a week from Sunday come with their own pedigree as a groundbreaking team in MLS. It took Toronto almost a decade to become a competitive outfit. Once the Reds cracked the code, they helped change the complexion of the League. Toronto’s ambition, first exhibited by the signings of Michael Bradley and Jermain Defoe and reinforced by the acquisitions of Sebastian Giovinco and Jozy Altidore, raised the bar.

Consider Toronto’s leap in ambition. That willingness to pay was proof of concept for the more recent expansion teams. It might be fair to say that without Toronto’s example, clubs like Atlanta and LAFC wouldn’t have jumped so willingly into the player market.

It wasn’t just spending millions on players. Toronto blazed a trail with a state-of-the-art training facility and took pains to act every bit the top class professional sports organization. If there are corners cut in Toronto, the results are imperceptible. 2018 was just a blip and not an indication that the Reds were back to their old ways.

This year’s TFC team is not the team of 2017. As Vanney so bluntly stated following the 2-1 win in Atlanta, the home team was better on the night. Atlanta outshot Toronto 19-4 and largely had their way with the ball. It was the stubbornness of Toronto’s defense, a penalty save by Quentin Westberg, and two moments of individual brilliance on the goals that pushed TFC through.

The indelicate term is “luck”, but there’s truth in the cliche that good teams make their own. The margins are small in MLS. In a single 90-minute game, advantages in talent are hammered down. Toronto is a good team, good enough to beat Atlanta in Atlanta.

So now we have the MLS Cup that seemed the least likely to happen from the four conference finalists. Regular seasons never really prepare us for the madness of the playoffs. Maybe we forgot what it was like to see the underdog prevail in these moments because Atlanta in 2018 and Toronto in 2017 backed up their famous regular-season campaigns with championships.

Never mind that Atlanta was a second-seed last year, just like Seattle in 2019. United’s run had an air of inevitability about it that is lacking heading into the surprising, but not all that surprising, clash for the 2019 title.

This final matchup was not inevitable. It was even probable. It bordered on chances closer to “slim” than “some”. Here we are because MLS never stays predictable for very long.