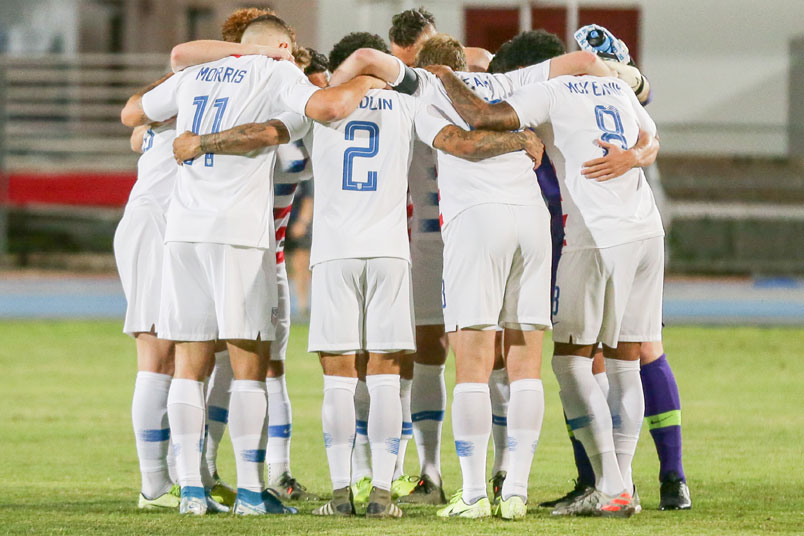 By Clemente Lisi – NEW YORK, NY (Nov 25, 2019) US Soccer Players – It has been quite a year for the United States. After losing to Mexico in the Gold Cup final over the summer, they ultimately did what was expected of them this Fall in the Concacaf Nations League. The recent wins against Canada and Cuba gave the USMNT confidence going into 2020 and allowed for younger players to get much-needed big game experience.

Gregg Berhalter, tasked with rebuilding the team, marked his first year as USMNT coach, compiling an 11-5-2 record. That record included several highs and lows, including a big win against Trinidad & Tobago and two defeats to Mexico and Canada for the first time since 1985. Those defeats aside, there are plenty of silver linings. In the world of international soccer, it’s all about what have you done lately.

What the United States did do lately is step up, winning against Canada (4-1) and Cuba (4-0) to stifle the critics for now. They were positive outings for a program still trying to find their footings and for a coach still testing players and formations. The international schedule has its limitations, but 2020 will be more competitive. Expect friendlies against European teams and World Cup Qualifying to create a pressure-cooker situation for the team.

Berhalter has been able to rely on a strong group this Fall. His great group of guys includes some players who have stepped up over the last few months. Names like defender Aaron Long along with forwards Christian Pulisic, Jordan Morris, Josh Sargent, and Gyasi Zardes. These are some of the players who will need to have a big 2020, given that the calendar calls for the start of 2022 World Cup Qualifying.

Now that the team has qualified for the Nations League semifinals with a June date with Honduras, here are three positives the United States can take into 2020.

Long is the heart of the defense

Now, 27, Long has become the top-class defender many expected him to be. Long is part of a tradition of New York Red Bulls players who have excelled in MLS. Like Tim Ream before him, rumors link Long with a possible move to England. A big reason for that has been his play for the National Team.

Used primarily in the center back role, Long has had a strong year for the United States. Not only can he lockdown opposing strikers, Long also has a knack for moving the ball forward in transition under Berhalter. He’s also dangerous offensively, scoring three goals in 14 games this year. Long has become the heart of this defense. The optimism that now surrounds the National Team is due in large part to what happened in 2019.

Morris and Zardes have matured into top finishers

A pair of MLS-based strikers led the offensive charge this year. Zardes, though inconsistent at times, admirably filled in for the missing Jozy Altidore. The Columbus Crew striker scored six goals in 2019, the most ever for him in a calendar year, and made a case for being a starter.

To go along with Zardes was Morris, who had a breakout year. Not only did he help Seattle win MLS Cup, he also scored five goals in 2019. That number equaled his career total leading into this year. Finally playing injury free, Morris has reached the potential everyone expected of him when he made his Seattle debut in 2016. The 25-year-old striker may have locked in his spot as a starter. Like any striker, he needs to continue scoring goals.

The decision by Dutch-born defender Sergino Dest to commit to playing for the United States was big. The National Team hasn’t been immune to losing the nationality sweepstakes in the past. This decision means Berhalter has another chance to add a top defender to his lineup at a time when games are starting to matter more and more.

The budding Ajax defender, just 19, amassed three caps under Berhalter after playing for the USMNT Under-17 and U-20 teams. The 4-1 win against Canada officially cap-tied Dest, where he was among the stars of the game. He has the composure that comes with a player with European experience. It will be that quality that Berhalter’s backline needs going forward.

Upon his official announcement that he would commit to the U.S., Dest told USSoccer.com: “I am therefore dedicated to making the next 10 to 15 years a big success and will do my utmost to help the team play for titles.” That’s what fans want to hear.

When it comes to the USMNT, the kids are going to be alright. Berhalter may have found the right mix of youngsters and veterans in time for World Cup Qualifying. For the United States, it has been an inconsistent year, but ultimately an encouraging one. It had all the trappings of a reboot. It’s really what 2019 was all about, regardless of the results. The transition year that could jumpstart a winning era for the Americans.