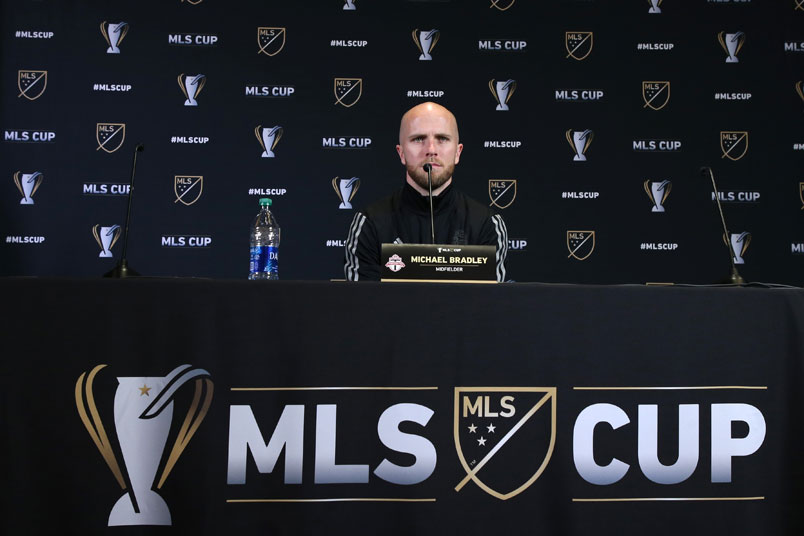 The soccer news starts with Sunday’s MLS Cup final (3pm ET – ABC). Home field advantage would be a bigger deal had Seattle not gotten it with a road win at Banc of California Stadium and Toronto hadn’t won at Mercedes-Benz Stadium. That took out the two biggest home field advantages in MLS, suggesting that a capacity crowd at CenturyLink is nice but not a huge issue for either team.

Whatever happens on Sunday, both teams are the types that will leave it all on the field. That’s what got them to the final game of the 2019 season, reworking the narrative that LAFC would end up hosting Atlanta or NYCFC. For both, it’s the reliance on offenses that will get them the goals. Even with the lead, Seattle spent a significant chunk of that Western Conference final expecting LAFC to respond. That’s a dangerous position, trying not to give up the kind of panic opportunities that tend to show up in that situation. Toronto’s win at Atlanta looked like it hinged on a penalty miss, but was as much about maintaining shape and confidence in their game.

It’s easy to look at that and see the kind of stalemate soccer that played out at BMO Field in 2016. That scoreless draw went to Seattle on penalties, the kind of game that doesn’t need a repeat. 2016 was an underdog MLS Cup with Toronto finishing 3rd to the New York teams and Seattle 4th behind Dallas, Colorado, and the Galaxy. Toronto didn’t have to beat the top-seeded Red Bulls, putting together a run through the field that saw them score 17 goals over five games. Seattle’s offense got eight, knocking out the Supporters’ Shield winners Dallas in the conference semifinals. The best explanation for how that MLS Cup ended with no goals in regulation is that is was 23 degrees at game time.

Snow is on the ground back in Toronto. The forecast for Seattle at game time is in the low 50s. That should benefit both teams in playing the type of style that got them through the playoffs. It’s easy to think of the All-Star Game as the annual commercial for MLS, but the bigger pitch will always be MLS Cup. It’s the trophy that counts, the easy sell for interest past the already committed. Seattle and Toronto may not be the headliners most expected, but both are fully capable of putting on a show.

Also in the soccer news, Tyler Boyd scored in Besiktas’s 3-1 loss at Braga in Europa League Group K. Trailing from the 14th minute, Boyd equalized in the 29th. Braga went ahead for good in the 37th with Besiktas’s Jeremain Lens seeing red in the 44th. Braga scored again in the 81st minute. Timmy Chandler subbed on in the 89th minute for Eintracht’s 2-1 loss at Standard Liege in group F. Trailing from the 56th minute, Filip Kostic equalized in the 65th. Liege scored their winner four minutes into stoppage time.

John Brooks wasn’t in the squad for Wolfsburg’s 3-1 home loss to Gent in Group I. Joao Victor scored for Wolfsburg in the 20th minute. Gent equalized in the 50th, scoring in the 65th and 76th minutes. Romain Gall was on the bench for Malmo’s 0-0 draw at Lugano in Group B. Fabian Johnson missed Gladbach’s 2-1 home win over Roma in Group J. An own-goal put Gladbach up in the 35th minute. Roma equalized in the 64th with Gladbach scoring five minutes into stoppage time. In Mexico’s second division, Rubio Rubin subbed on in the 63rd minute for Dorados in their 0-0 draw at Mineros de Zacatecas

AP’s Rob Harris reports that FIFA is moving forward with its new restrictions on agent fees despite pushback from agents. Inside World Football’s Andrew Warshaw with FIFA reaching out to the World Leagues Forum over the revamped Club World Cup.