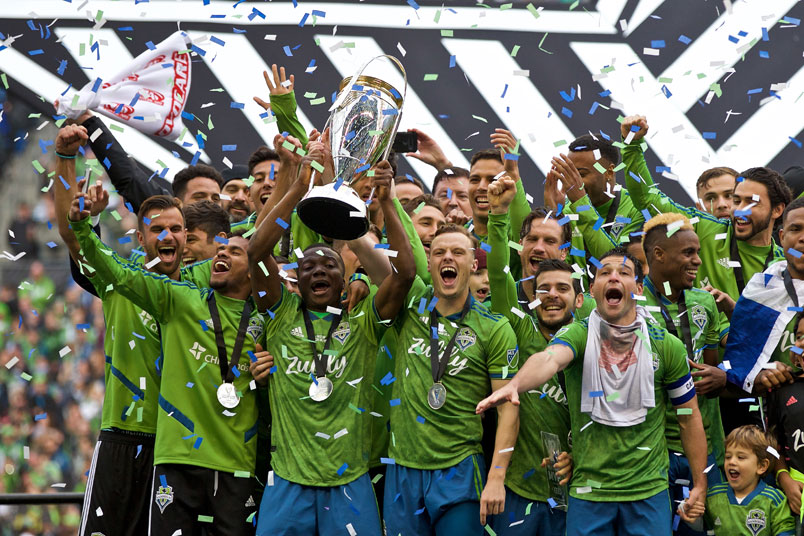 By Luis Bueno – RIVERSIDE, CA (Nov 13, 2019) US Soccer Players – The final MLS match of the 21st century’s second decade played out on Sunday in Seattle. When the Sounders toppled Toronto FC in the 2019 MLS Cup, they also put the 2010s to rest. Next season ushers in a new decade full of new teams and new challenges.

So who was the MLS team of the 2010s? The LA Galaxy certainly had a claim on it, winning three MLS Cups. Their downturn in form over the second-half of the decade makes it tougher to argue their case. Seattle appeared in their fourth MLS Cup of the 2010s on Sunday, winning two.

Three beats two, of course. That’s where the Galaxy’s candidacy might take the top spot for the 2010s. The last decade certainly added to the amount of silverware won by the Galaxy. The overall body of work over the last ten years might tilt towards Seattle.

What’s left of the Galaxy dynasty at decade’s end was tough to see coming. They made the Western Conference final in 2010, turning 2011 into a statement season that ended with an MLS Cup. 2012 looked like a regression only for LA to turn it around and win another Cup. Without David Beckham in 2013, the Galaxy needed to regroup. They did that by winning the 2014 MLS Cup. Three championships in a four-year span is quite an accomplishment, but the Galaxy was unable to do much the rest of the decade. It’s been five seasons since the Galaxy played for MLS Cup.

Seattle meanwhile won its first MLS Cup in 2016, besting Toronto FC in what would be the first of three MLS Cup meetings between the two sides over a four-year span. Prior to that, Seattle’s biggest problem was the LA Galaxy. Four times the Sounders and Galaxy met in the postseason this last decade, and three times the Galaxy advanced. The Sounders’ lone playoff triumph over the Galaxy squashed their hopes of a second repeat as Seattle bounced the Galaxy from the 2015 postseason in a knockout-round match.

Even with that win, though, the Galaxy has a 3-1 record over the Sounders in the playoffs last decade. The Galaxy also has three MLS Cups to Seattle’s two. That alone might be enough for the Galaxy to lay claim to the decade’s best team, especially when you factor in the Galaxy’s two Supporters’ Shield wins to Seattle’s one.

Seattle, on the other hand, won three US Open Cups in the 2010s. Seattle started the decade off with Open Cup wins in the 2010 and 2011 editions and won its third of the decade and fourth in a six-year span in 2014. Championships count in the final tally, and three beats none.

The Galaxy then finished the decade with fewer trophies than Seattle. The Galaxy had three MLS Cups and two Supporters’ Shields while Seattle had two MLS Cups, one Supporters’ Shield, and three Open Cups. With a better overall regular-season record, more points, and more playoff appearances, Seattle’s body of work is the most impressive in the league in the 2010s. Does that make them the best team of the 2010s? Maybe.