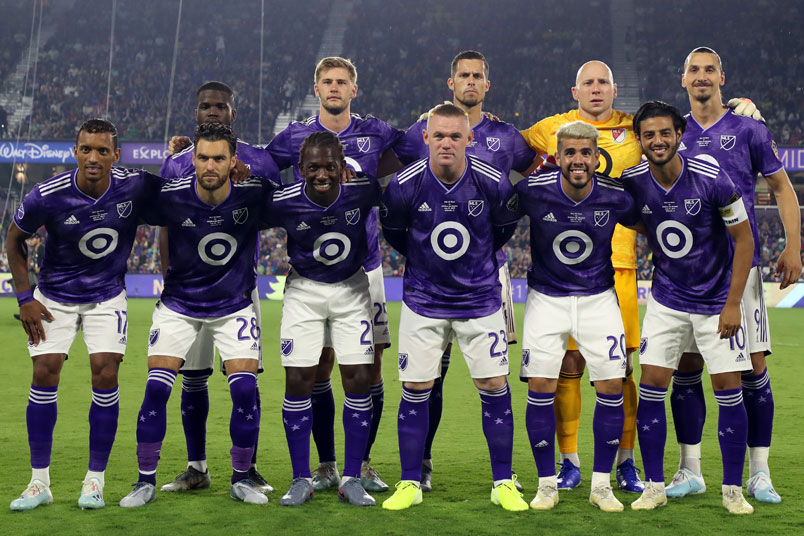 By Charles Boehm – WASHINGTON, DC (Nov 14, 2019) US Soccer Players – Zlatan Ibrahimovic announced his departure from the LA Galaxy this week after two seasons packed with scoring exploits on the pitch and headline-grabbing quotations off it. David Villa, an MLS icon of similar proportions with NYCFC before spending the past year in Japan with Vissel Kobe, revealed his impending retirement as well. Villa plans to return to the Big Apple as part of a new USL Championship expansion team in Queens. On Thursday, former New York Red Bulls great Thierry Henry surprised most everyone by returning to North America to become the Montreal Impact’s new head coach.

It’s an opportune moment to reflect on the unique contributions of these stars, and their comparable peers like Wayne Rooney and Bastian Schweinsteiger, as MLS faces one of its oldest and most stubborn quandaries once again.

After unhappily bearing the tag of “retirement league” for most of its quarter-century of existence, for several years now the league has done its level best to tell a new story. Many of its teams have elected to invest many millions in domestic youth development. Clubs welcomed a new crop of executives ready to buy and flip stylish rising talents from abroad. No longer would MLS have to be merely a cul-de-sac for those on the back end of their careers. Now it could offer itself as a thruway for those with aspirations to climb onwards to the world’s biggest clubs and leagues.

That’s a more dynamic, or at the very least more interesting, narrative. The problem is that it hasn’t yet displaced the enduring value of established names and the relevance they bring.

It will have surprised no one that Ibrahimovic and his made for prime-time personality brought a riveting carnival element to the Galaxy. Or that Rooney instantly drew global headlines that had eluded DC United for the better part of two decades. While they couldn’t quite push those MLS originals back to their trophy-winning ways of old, both megastars certainly thrust them back into the wider conversation. That can be just as important to the bottom line. Especially among the casual and skeptical audiences that appear to hold the key to hopes of future growth.

“We just hit our social media metrics goals for the year in about 15 minutes. thanks, Zlatan!” tweeted MLS social-media manager Dan Stelly in the wake of Ibrahimovic’s jaw-dropping Galaxy debut last year, where he came off the bench to score two virtuoso goals in a 4-3 comeback win over LAFC on national television in the first edition of “El Trafico,” the league’s new Southern California rivalry. “Two days later & the wave is still rolling,” Stelly added on the same medium later that week. “The yearly metrics bit was *mostly* tongue-in-cheek, but we’ve never seen numbers like this before.”

That instant, worldwide attention, made El Trafico the biggest event of the day in North American sports and perhaps beyond in social media terms, eclipsing the NCAA basketball tournament’s March Madness and the day’s NBA action. Zlatan’s first goal would eventually win MLS Goal of the Year and set the tone for his Hollywood-caliber stint in SoCal while drawing millions of eyes and impressions to a league still thirsty for both.

As veteran Galaxy communications executive Brendan Hannan noted on Twitter: “One last bit on Zlatan’s impact. The below video of him dodging two pitch invaders has over 54 million views across #LAGalaxy channels. More than any piece of content ever created in #MLS by a country mile. He was must-see TV and whether you loved him or hated him, you watched.”

Ibra’s resume, reputation, and character are fairly unique. Still, Rooney brought a similar scale of stardom when he touched down in Washington last summer, even by mainstream American sports standards. Even now, as he returns to MLS as an unproven coach rather than a superstar striker, Henry immediately made the Impact Canada’s most discussed social media topic of the day on Thursday.

When Rooney joined United, The Washington Post stressed the point that he had more social media followers than the elite list of athletes playing for the city’s other teams combined. 17.2m on Twitter at the time.

It will escape no one’s notice that Ibrahimovic was 37 on his arrival. Or that Rooney hit the league at 32. Or that Villa continued to bang home goals for NYCFC at prodigious rates right up until his 37th birthday. That should give pause to all of us, including commissioner Don Garber, who declared at last week’s “state of the league” address that MLS was no longer merely on the rise but “a league that’s arrived.”

It’s understandable that MLS and its member clubs would like to talk about fresher plotlines like Atlanta United and LAFC and Miguel Almiron and Paxton Pomykal and Jordan Morris and even Joe Scally, the NYCFC teenager sold to Borussia Monchengladbach for a seven-figure sum this week. In its pursuit of improved TV ratings and advertising dollars and the like, this league still depends on the Ibras and Rooneys, and its marketing efforts reflect that. Will that ever really change? Though stranger things have happened in MLS, it’s hard to imagine it any time soon.