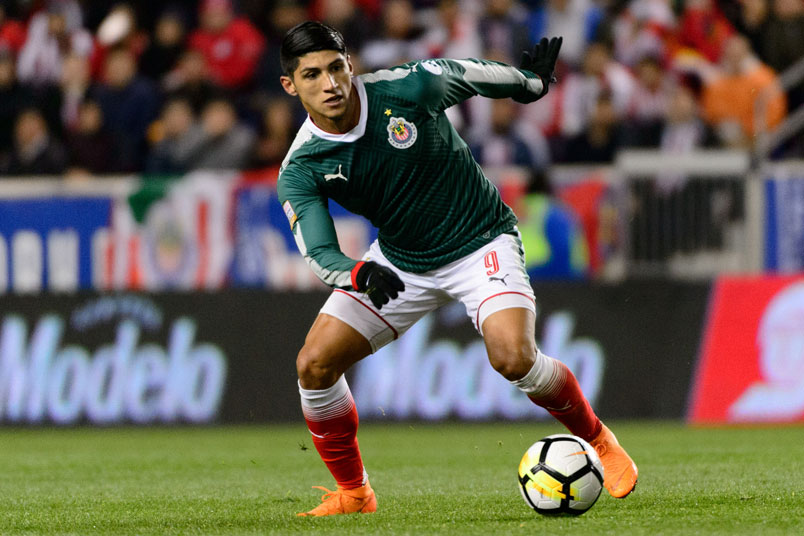 By Luis Bueno – RIVERSIDE, CA (Dec 11, 2019) US Soccer Players – When star Mexican striker Alan Pulido decided to leave Chivas Guadalajara, he had plenty of options at his disposal. Pulido had suitors both domestically and abroad. With Europe already in his past, he had his pick of places to go. Somehow, he chose Middle America.

It may seem like an odd choice, but Pulido’s move to Sporting Kansas City makes sense. It signals a continuing shift in the mentality that had existed since the beginning of the league. Mexico has traditionally looked down on MLS and considered it a retirement league. MLS, meanwhile, has tried to compartmentalize Mexican players as mostly an asset for teams in Mexico-rich markets such as Los Angeles or Chicago.

Pulido is the latest big-name Mexico international to join an MLS team not based in a Mexico-rich environment. The mentality shift is clear. MLS teams are less and less concerned about passports and more concerned about winning. Mexican players are more and more open to the league because of that.

Pulido himself was a bit of a get for Chivas when he joined the club in 2016. A product of UANL Tigres’ strong youth system, Pulido left Tigres for Greek side Levadiakos in 2014. It was an odd destination for a Mexican player. Ever the trailblazer, though, Pulido found success. He quickly moved to Greece’s strongest side Olympiakos, playing in Europa League and Champions League qualifiers.

He kept that level of success on his return to Mexico with Chivas. Pulido helped Chivas win the Clausura 2017 championship and the 2018 Concacaf Champions League. Despite having more than one year left on his contract, Pulido wanted out of Chivas in pursuit of new challenges. Enter Sporting Kansas City.

An MLS original, Sporting KC fell on hard times in 2019. The year started well, but the wheels came off for the club very quickly. Instead of competing for the Western Conference title, Sporting KC fought to stay out of last-place in the conference table. A 38-point season was unacceptable. Sporting KC was in the market for a prolific scorer, among other things. Pulido had made it known he was looking for a move, and the two things coincided.

Pulido’s MLS suitors included San Jose, a logical choice for the striker. Former Chivas coach Matias Almeyda had a somewhat successful first season with the Earthquakes, who need a player to help push the club over the brink and into the postseason. Despite those connections and the standard thinking about where Mexican players should play, Pulido made his way to Kansas City.

Sporting KC’s centerpiece to its roster overhaul is Pulido. The club is hoping the talented striker will become one of the league’s best and will help Sporting KC regain its fallen form. The club believed in him so much that they spent a reported $9.5 million to acquire his services. Sporting KC beat out other clubs to get him, and the club-record transfer fee likely helped.

That it was Sporting KC to land his services should not come as a total shock, though. Sporting KC already scooped other MLS suitors for a star Chivas striker. Omar Bravo spent one season in MLS with Sporting KC in 2011. Sporting KC made that move despite competition from Chivas USA.

What Sporting is showing is a willingness to spend and no fear in pushing their budget. That same attitude helped Marco Fabian join Philadelphia Union a year ago. Also a former Chivas player, Fabian opted to head to MLS after his Bundesliga stint ended instead of going back home to Liga MX. Fabian helped Philadelphia finish 3rd in the Eastern Conference, reaching the semifinals for just the second time in its history.

The move could potentially lead other Mexican internationals to see the whole of MLS as a viable option. Teams like Atlanta, Orlando, and NYCFC have joined the league in recent years and have spent money on transfers. Atlanta, most notably, has broken the bank on several incoming players. LAFC has also not been shy about spending money.

More teams willing to spend changes the perspective from down south. It is not just out-of-contract players who can venture north. It’s players under contract, looking to make a move and have a payday as part of the same process.

Sporting KC had more problems than just scoring, though. The club’s defense was porous, and the midfield got run over often. Only two Western Conference clubs scored fewer goals than Sporting KC’s 49. The club does feature Felipe Gutierrez with a dozen goals and Johnny Russell with 9 in the attack. Pulido brings a third Designated Player to the front line. Gutierrez, though, plays in the midfield and might see his goal totals drop while his assists surpass the three he finished with a year ago. Still, the emphasis in Sporting KC is clearly on the attack despite having a defense that allowed a conference-high 67 goals last season.

What we already know well in advance of the start of the 2020 season is that Sporting KC is looking to get back to its winning ways. MLS teams like Sporting KC are interested in winning and are willing to spend money to do just that, regardless of where the player comes from.