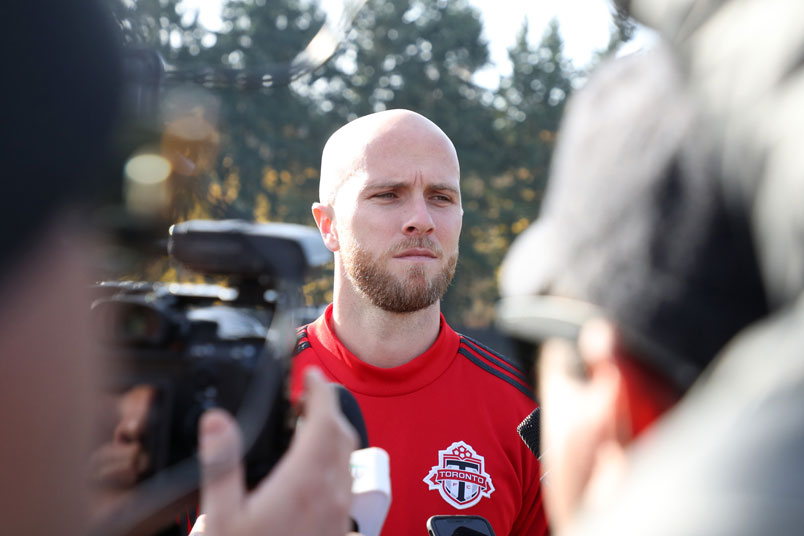 The soccer news starts with Toronto announcing that club captain Michael Bradley will stay with the team. Bradley was out of contract at the end of the 2019 season, but there was little speculation of him ending up anywhere else.

"I feel so attached to the city of Toronto, the club, the team. I love it here and I am really proud of what we’ve been able to do over the past six years," Bradley said in a press statement. "Beyond the success, I am equally as proud of the mentality and identity this club has taken on. The relationship between the club and the city, the club and the fans are both very special and I’m proud to have played a part in that. What we have in Toronto doesn’t exist everywhere. My family and I are so happy to remain in Toronto and we’d like to thank everyone at Toronto FC for ensuring that this process was done quietly and professionally behind the scenes. I’m looking forward to continuing to play in the biggest games and competing for trophies every year."

Also in the soccer news, US Soccer announced that Christian Pulisic is the winner of the Male Player of the Year award. It's Pulisic's second win, the seventh player to win the award more than once. Pulisic also won in 2017.

In the Champions League, Ethan Horvath on the bench for Club Brugge's 3-1 home loss to Real Madrid in Group A. Falling behind in the 53rd minute, Hans Vanaken equalized for Club Brugge in the 55th minute. Real Madrid went ahead for good in the 64th, scoring again a minute into stoppage time. Club Brugge finished in 3rd-place and drops to the Europa League. PSG won the group with 16 points, followed by Real Madrid with 11, Club Brugge at 3, and Galatasaray exiting European competition with 2.

"Our ambition there is the same as it is now," Club Brugge coach Philippe Clement said. Namely, trying to win every time. How far you get will depend to a large extent on the draw. We will see, but I think this team has the qualities to win against any team. If you can do this against PSG and Real Madrid, you can handle any team."

Geoff Cameron's QPR won 2-0 at Birmingham City in the Championship. Grant Hall scored in first-half stoppage time with Bright Osayi-Samuel doubling the lead in the 67th minute. Joe Lumley kept the clean sheet with two saves. QPR is 12th in the table tied on points with 9th-place Cardiff City and 10th-place Blackburn with 31 from 21 games played.

"The first-half was very scrappy and a poor game of football in truth by both teams," QPR manager Mark Warburton said. "We had to set a better tempo and take care of the football, and in the second-half I thought we did that. We defended our goal with a real passion, we looked dangerous, got the second goal and really threatened, so I’m delighted for the players."

Antonee Robinson's Wigan Athletic drew 1-1 at home with West Bromwich Albion. An own-gal put Wigan up in the 50th minute with West Brom equalizing in the 59th. Wigan is in 23rd-place in the Championship, tied on points with 22nd-place Stoke City three points from 21st-place and safety.

"We were good tonight, we played really well, and I am delighted with the players," Wigan manager Paul Cook said. "We have to keep going; we get a lot of criticism and that is the nature of the game we are in but 21 games into the season and that’s probably our best performance of the season tonight against a very strong team. I am so disappointed we didn’t win because we deserved to. When you see the one bounce off the bar and come out you just feel it is not going to be our day. I think the players can take great pride in how they played tonight."

The NY Times' Rory Smith takes a look at where the money goes in the Champions League. The Premier League announced that interim CEO Richard Masters is now the permanent hire. BBC Sport's Mick Turner on the financial issues some Championship clubs face. The Telegraph's Matt Law on an American attempt to buy Chelsea, a club that may not be on the market.