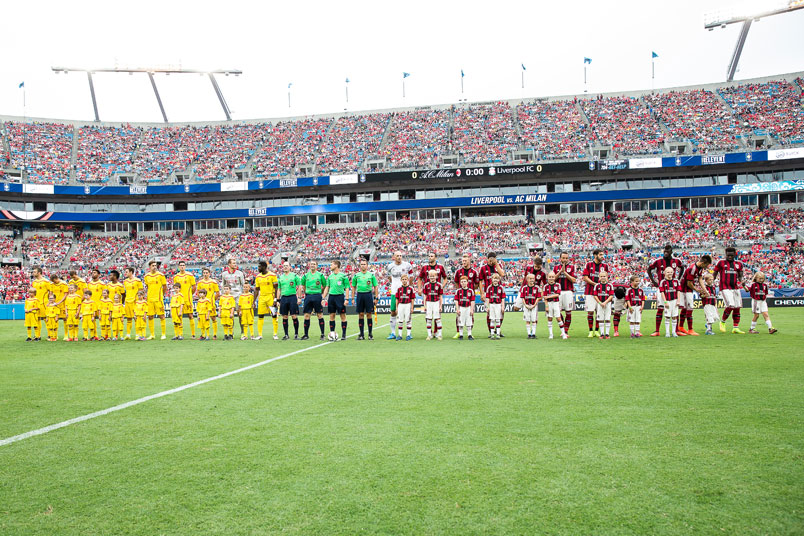 By Clemente Lisi – NEW YORK, NY (Dec 9, 2019) US Soccer Players – The expansion sweepstakes to bring the 30th team to MLS has intensified over the past few weeks. As the ever-growing league looks to add yet another franchise, Charlotte has emerged as the frontrunner against Las Vegas and Phoenix. Last week, MLS Commissioner Don Garber said the league was working with Charlotte to award it a franchise.

David Tepper, who owns the Carolina Panthers, paid $2.3 billion to buy the NFL team in 2018. Reports have the expansion fee at $300 million to get an MLS team in Charlotte. One major hiccup is the stadium and whether an estimated $100m in public funds will go towards paying for renovations. Opening in 1996, Bank of America Stadium is currently the 10th oldest in the NFL, becoming the 8th oldest next season. Though it has hosted plenty of topflight soccer, it lacks the setup for a modern MLS stadium. Reports also have Tepper pushing for a new retractable dome stadium for both teams.

Despite those logistical stadium issues, Charlotte represents an important market for MLS. The South has seen major growth for the league in recent years following the addition of Atlanta United. Charlotte, if approved, would become the fourth city awarded an MLS club over the last year, joining St Louis, Austin and Sacramento.

Charlotte would also join two other teams located in Southern cities, Nashville SC and Inter Miami CF, both slated to make their debuts this coming season. Charlotte’s location remains key. It’s a major sports market that can draw fans from a large geographic area. A mix of millennials and a growing Hispanic community makes Charlotte a natural for soccer.

“We believe it’s a growing city on the rise and one that has got so much opportunity for us to be able to continue to expand our league,” Garber told reporters last Thursday following an MLS board of governors meeting in New York.

Soccer has roots in North Carolina dating back decades. If recent history is any gauge, a bright future as well. This past summer, Bank of America Stadium hosted a Gold Cup doubleheader with Canada playing Cuba followed by Mexico against Martinique that drew 59,283 fans. It was no surprise. Previous friendlies featuring high-profile European clubs consistently recorded near sellouts. Liverpool and Inter Milan in 2014 attracted 69,364.

Raleigh was also bidding for an MLS franchise but failed to gain momentum after a stadium deal never came through. Charlotte only emerged as a candidate after Tepper decided to get involved. As a result, a city that has for years tried to get a Major League Baseball team could very well have a pro soccer club playing there as early as 2021. Tepper told reporters last month that he finds it unlikely Major League Baseball would move to the city. That means an open market for soccer, even if Charlotte’s AAA baseball team is finding success in a new ballpark within walking distance of Bank of America Stadium.

Tepper would like to emulate the model Arthur Blank has put together in Atlanta. Owner of the NFL Falcons, Blank has made soccer a centerpiece of the sports and entertainment options of Atlanta during the summer. At the same time, Tepper, who is worth an estimated $12b, has tried to make the Panthers more appealing to both fans and sponsors through a series of new initiatives.

Those are some of the reasons why Tepper’s bid is so attractive to MLS. Despite no soccer-specific stadium, Tepper is the type of owner not afraid to spend money, while also interested in building up interest in soccer throughout the region. Unlike expansion teams that grew out of the USL like FC Cincinnati, Charlotte, similar to Atlanta, would have to start from scratch. That means lots of financial resources poured into a market both in advertising and sponsorships. In Tepper, the league has that type of investor/operator.

Negotiations with Tepper come at the same time as MLS made welcomed Silicon Valley veteran Meg Whitman as a $100m investor in FC Cincinnati. That’s a sign that in an era of rising expansion fees, wealthy investors are not scared of putting their money in American soccer, specifically MLS.

At this point, Charlotte joining MLS is a matter of not if, but when. It would be giving the league another strong market and an owner with deep pockets who believes in the growth of the game in this country.