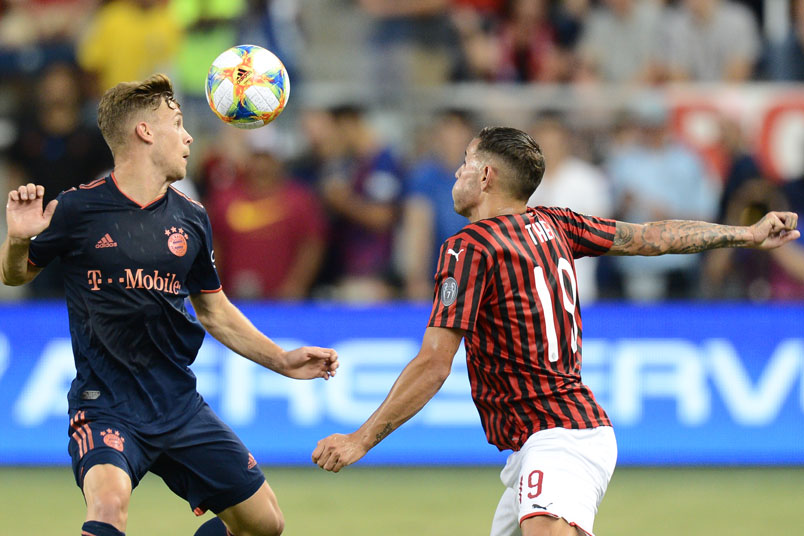 By J Hutcherson (Dec 10, 2019) US Soccer Players – Last week, the New York Times’ Tariq Panja reported that Real Madrid president Florentino Perez is pushing for a European super league. The start of that league would coincide with the end of the current Champions League broadcast rights deal in 2022. UEFA has been hard at work trying to recraft the Champions League post-2022, recognizing that the elite clubs are unsatisfied. That’s how we learned about the push to all but close off the Champions League to any club not in the big five European domestic leagues. More to the point, it would keep the elite clubs in the Champions League for multiple seasons, regardless of their domestic performance.

In real terms, what UEFA’s consensus-building has accomplished is once again bringing the point of the Champions League into question. If it’s a tournament for the elite clubs of Europe, wouldn’t those same clubs be better served doing the same thing on their own? This has been at issue for decades now, alongside UEFA reconstructing their tournament to keep those clubs in line. That push-pull isn’t lost on any of the participants, with Perez only the latest to promote an alternative.

UEFA and Europe’s domestic league should be familiar with this situation by now. It’s when that alternative makes more sense than anything they’re likely to offer. Perez is reportedly promoting his plan as a quick way to double the money for the super league clubs. Without delving into the economics, that sounds about right. Having the elite of Europe playing each other exclusively would probably sell well in Europe and everywhere else you find fans of those clubs. It’s what happens when turning local soccer teams into successful international brands. The push back against that has mostly failed, with those teams turned businesses more than happy to exploit their valuable rights across the globe. UEFA and the domestic leagues are right there with them, with none of them satisfied with any limits to geography.

Again, and it’s been on repeat since the mid-90s, the eventual result of that kind of thinking and promotion is the elite clubs breaking away entirely. It doesn’t take one of those When Saturday Comes “Stuff Yer Superleague” T-shirt to get the point that this is nothing new. If anything, we’re in an era of super league fatigue. It’s the end of the second decade or more of waiting on the super league to finally happen. That delay is in large part to UEFA bowing to the demands of the elite clubs. Not that it ended up being much of a burden considering how much revenue the Champions League generates.

The response of UEFA through their president Aleksander Ceferin is also nothing new. It’s that feigned outrage in the face of what looks like an obvious conclusion. Keep stressing the money and pouring enough of it back into the super clubs to keep them satisfied. Except what emerged is a silly system where a losing team can make more than the champion. UEFA’s insistence on club and league coefficients along with domestic TV rights creates that “loser as economic winner” scenario. Why not do away with all of that entirely? If shame is the best argument against it, it’s not really much of an argument.

Enter the European Leagues, the group that represents the domestic leagues across Europe, with its president now joining UEFA’s in condemning the concept of a breakaway super league by attempting to shame the clubs involved. In a letter released on December 10 and titled “We don’t need an ivory tower in football,” the group that represents the European domestic leagues let us know that, “We are getting very tired of all the threats coming from a few rich clubs in football. Threats that they are going to break away from the football ecosystem as we know it and create their own private entertainment.”

The European Leagues remedy is also nothing new. They want to kick any super league members out of organized soccer, the old renegade league model FIFA once used for Colombia back in the early 1950s. At the time, Colombia offered foreign players more money than they could make domestically. Enough took them up on that deal to present a problem. FIFA declared the Colombian league outlaw, banning any foreign player signing with a Colombian club from representing his national team and Colombia from the 1954 World Cup.

It may seem like ancient history, but that’s the same scenario in play now. Part of UEFA’s outrage is that Perez has reportedly met with FIFA to keep his proposed super league sanctioned. That would mean the super players playing for those super clubs would still be eligible for international duty. That may also be a temporary reprieve for an obvious conclusion. A league system made up of 40 super clubs, as Perez proposes, would have the bulk of the world’s soccer talent. With that, they would also have the better bargaining position.

With both UEFA and at least the elite European leagues benefiting from the current system with their elite clubs in place, the motivation is obvious. The current system works for them, so the only response is to fight change. It’s a tough suggestion to see either the confederation or the leagues as defenders of traditional soccer. What they’re defending is the current business model that the super clubs would disrupt.

The European Leagues letter stresses that “the solution is not a closed league at the top of the pyramid in Europe and certainly not a closed shop on top of the world where only a few of the richest clubs are invited.” That may be the ideal of European sporting merit, but it’s not likely to shame the super clubs into compliance. What has done that since the rise of the Champions League in the mid-90s is the distribution of money first and guaranteed games second. A super league, even in theory, does a better job with both of those. Whether or not that unavoidable result ends up the answer for Europe’s elite is still, surprisingly, open for negotiation.