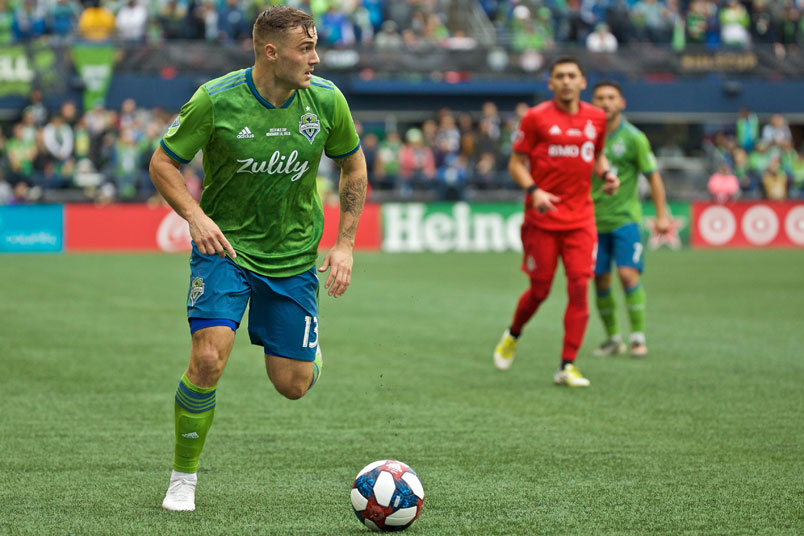 By Clemente Lisi – NEW YORK, NY (Dec 16, 2019) US Soccer Players – The close of a calendar year is often a time for reflection. It is also a time to look ahead to the new year and what 2020 may have in store for all of us. For MLS, the big question is how will teams navigate player signings, preseason, and the Concacaf Champions League as a new MLS season approaches.

While MLS is unpredictable, there are a few teams reliably winning the past few years. Some, like the Seattle Sounders, have MLS Cups. Others like LAFC and NYCFC remained competitive for large parts of the regular season, only to fade in the playoffs.

As teams continue to assemble rosters, scout players ahead of the draft, and plan training sessions and friendlies after the holidays, it’s the same question. How do we tell contenders from pretenders by the start of the regular season on February 29? The new season officially opens with eight games that day, with DC United hosting the Colorado Rapids first on the bill.

Three teams, NYCFC, the Chicago Fire, and expansion side Inter Milan FC, have yet to name a head coach. Three other teams, Orlando City FC, Houston, and the Montreal Impact have new coaches in place. At the intersection of winning and rebuilding, Seattle opens its title defense at home on March 1 against the Fire at CenturyLink Field. It will be great to see where these two teams, at opposite ends of the spectrum, stand early on.

With the opening weekend fixtures already set, here’s an early look at five early Supporters’ Shield/MLS Cup contenders and why each could have a championship season in 2020.

More difficult than winning a championship is defending it, but nobody is going to complain about being in that situation. The Sounders will be busy on multiple fronts, including facing Olimpia of Honduras in their Champions League opener. It’s a manageable opponent, but more games means the need for a deeper roster.

Under coach Brian Schmetzer, Seattle has found a way to win when it mattered most. Managing players and the schedule, especially early on, will tell us a lot about how Seattle’s season could potentially go. It helps to have players of the caliber of striker Raul Ruidiaz, Jordan Morris, and Nicolas Lodeiro returning for another year.

The Canadian club has had some up-and-down seasons over the past three years. From champion, to missing the playoffs, to losing the MLS Cup final to Seattle. That losing season in between was, in part, due to trying to manage the Champions League along with MLS. Toronto will not find themselves in that situation this season, meaning they can focus solely on the league. That will serve them well, considering Seattle, Atlanta, NYCFC, and LAFC will all be involved in the Champions League when the quarterfinals start on February 18.

As for the team, they recently re-signed captain Michael Bradley, giving them plenty of experience and stability in the back and midfield. Defender Drew Moor and midfielder Jay Chapman are out but expect striker Jozy Altidore and Alejandro Pozuelo to be back. The two combined for 23 goals last season. A repeat performance would certainly keep Toronto in contention.

Investor/operator Arthur Blank sets a winning mentality at the top of a club. Add in their dedicated fan base and talented roster, and Atlanta could go deep once again. Back for a second season, coach Frank de Boer will need some reinforcements this winter.

More than reinforcements, the team will have to try and keep players who are free agents this year. Jeff Larentowicz, now 36, has been a reliable defender. If he were to decide not to sign, the team would be on the market for a strong defender. Atlanta’s attack is stacked, and striker Josef Martinez continues to be a scoring machine. Look for him to lead the team in that category again this season. His blistering scoring pace is a big reason Atlanta remains in the title conversation.

This is a team that has had great seasons and really bad ones all in a span of a few years. Under veteran coach Peter Vermes, Sporting KC normally causes opponents trouble. This coming season, they may have the pieces once again to win it all. After sending Dom Dwyer off to Orlando City in 2017, Sporting KC never really filled that striker position with a player who was a dependable scorer. Their latest answer is the recent acquisition of Chivas forward Alan Pulido as a Designated Player for a club transfer fee record.

Pulido is coming off a strong fall campaign, scoring a dozen goals in 18 games for Chivas in the Apertura. Pulido is part of a wave of Mexican players who now call MLS home. It’s become a successful pipeline for several teams. One player doesn’t a team make, but Pulido could be the kind that can make everyone better. Sporting KC is hoping Pulido is the type of player that can both thrive in MLS as well as lead them to a title.

If you ranked these five teams on this list, LAFC would be on top. Heavily favored to win it all this past season, LAFC faltered in the playoffs. Unlike the other teams involved in the Champions League, LAFC opens with a difficult scenario. They play Liga MX’s Club Leon, easily the toughest matchup of the quarterfinals.

Like Seattle and Atlanta, Los Angeles has a great attack. The duo of Carlos Vela and Diego Rossi have been the most prolific of the past two seasons. Vela, the reigning MLS MVP, is building on that exceptional season. The team added to its offense by recently signing San Jose Earthquakes striker Danny Musovski, adding roster depth as LAFC looks to win silverware on several fronts.