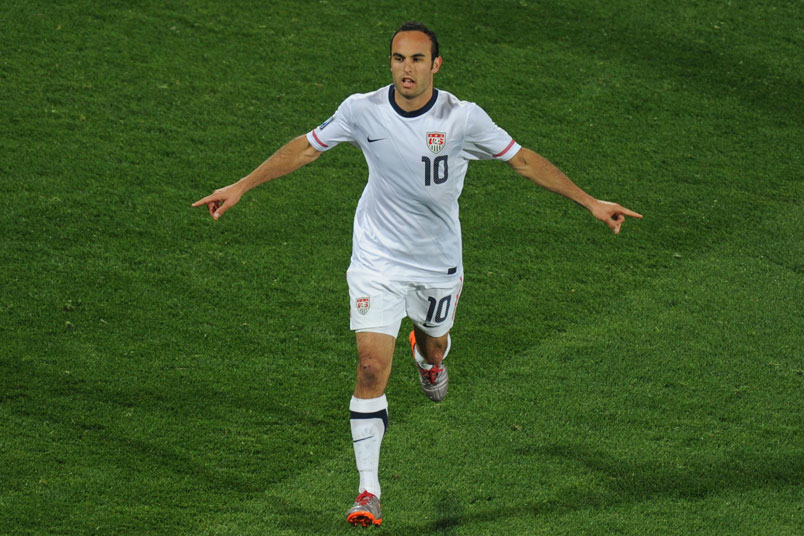 By Clemente Lisi – NEW YORK, NY (Dec 23, 2019) US Soccer Players – The next two weeks mark the end of not just another year, but a decade. For the USMNT, it was another ten years full of joyous moments and historic milestones. It was a decade that saw the United States win two Gold Cups while reaching the finals of two World Cups. The team scored some big goals and stunned various opponents. The Americans played in two World Cups, failed to reach another, saw players retire, and rebuilt itself over the past two years thanks to a pipeline of emerging talent.

It’s been a crazy decade with many ups and downs. Here’s a timeline of the ten biggest moments involving the USMNT over the past ten years, in chronological order, starting with the 2010 World Cup.

Landon Donovan’s goal against Algeria at the World Cup (2010)

Where were you when Landon Donovan scored against Algeria? The last-gasp strike to break the scoreless tie and allowing the United States to win its group and reach the round of 16 at the 2010 World Cup in South Africa. The goal both helped the US advance as well as turn America into a soccer-mad nation, albeit for a few weeks that summer. The call by Ian Darke on ESPN lives on in the memories of millions and on YouTube, allowing Americans to relive that moment over and over.

“My favorite memory from that goal was turning the corner and looking up and seeing first Stuart Holden’s face running toward the corner flag, followed by like 30 people – including staff and coaches and everyone – and just kind of meeting at the corner flag to celebrate,” Donovan told me in December 2010. “That was a really cool moment.”

Americans defeat Italy for the first time ever (2012)

It may have been just a friendly, but the win against Italy in Genoa was one for the ages. The Americans, 1-0 winners following Clint Dempsey’s goal, had not been able to defeat Italy in their previous ten meetings. Dempsey’s goal came in the 55th minute, a shot that beat veteran goalkeeper Gianluigi Buffon, one of the best at his position at the time.

It marked then-coach Jurgen Klinsmann’s fifth win in ten games and served as personal revenge of sorts. The former Germany coach was on the sidelines when Italy defeated his homeland during the 2006 World Cup semifinals on their way to a fourth title.

RFK Stadium was the site of a thrilling encounter between the United States and Germany, a friendly the Americans were able to win 4-3. It’s true that the US almost squandered a 4-1 lead and that the Germans fielded a depleted squad. It was a high-profile friendly win to mark US Soccer’s centennial. Dempsey had two second-half goals.

The Americans won their first Gold Cup of the decade at Soldier Field in Chicago following a 1-0 win over Panama. The opponent was a surprise considering the USMNT and Mexico met in the previous three finals. The 2013 Gold Cup was a rematch of the 2005 final, a game the USMNT won on penalties. The difference-maker this time was Brek Shea, scoring in the 69th minute less than a minute after coming off the bench.

On a night more suitable for sledding than soccer, the US used home-field advantage like no one ever has in Concacaf. The snow and cold were too much for Costa Rica in this World Cup Qualifier played in Commerce City, Colorado. The result was a 1-0 win in a crucial World Cup Qualifying match. It was Dempsey’s 16th minute goal that proved to be the game winner, catapulting the US from last place in the Hex to second. Brad Guzan, in net for the injured Tim Howard, earned the shutout in a game the Costa Ricans later complained should have been postponed.

It was the fifth time that the US got the best of rivals Mexico in a game that mattered, posting a 2-0 win at Columbus Crew Stadium in Concacaf World Cup qualifying. The win helped the Americans punch their ticket to the finals thanks to second-half goals by Eddie Johnson and Donovan. It marked the final time the USMNT defeated Mexico by that scoreline after four-straight World Cup cycles starting in 2001. The US also beat Mexico 2-0 in the round of 16 at the 2002 World Cup, arguably the biggest game the sides have ever contested.

The USMNT played a phenomenal World Cup in Brazil, defeating Ghana and drawing Portugal to reach the round of 16. That set the stage for a do-or-die match against Belgium and its star-studded lineup that included Romelu Lukaku. It was Lukaku’s goal that ultimately made the difference.

The game against Belgium in Salvador turned into a heart-stomping affair that ended in a 2-1 defeat in extra time. The defeat ended the US’s captivating run. It also cemented Howard’s place as one of this country’s best-ever goalkeepers. Howard made 15 saves, the most in a World Cup game since 1966.

Twin wins against the Netherlands and Germany (2015)

In just five days, the United States was able to post twin wins against heavyweights the Netherlands and Germany. The 4-3 road win against the Dutch on June 5 was by a young American team with goals by Gyasi Zardes, Jonathan Brooks, Danny Williams, and Bobby Wood.

On June 10, the Americans pulled off another shock result – a 2-1 comeback win that came on a Wood goal with three minutes left to play. The victories put everyone on notice that Americans, both the ones based on MLS and in Europe, had matured into competitive players. The wins also rewarded the US for putting together a tough schedule of friendlies to better prepare for games that counted.

The Americans won a second Gold Cup at Levi Stadium in Santa Clara, defeating Jamaica 2-1 on goals from Jozy Altidore and Jordan Morris. It was Morris’s goal in the 88th minute that gave the USMNT a sixth continental title. For Morris’s budding career, it was an indication that he could become one of this country’s most-gifted scorers.

Failing to qualify for the 2018 World Cup forced a National Team reset. After hiring Greg Berhalter as coach, the Americans spent much of the year prepping for the Gold Cup. That the US ended up in the same first-round group against Trinidad & Tobago was not lost on anyone. After all, a defeat to T&T had kept the Americans out of Russia 2018. The players insisted the game at FirstEnergy Stadium in Cleveland was not a revenge match. What transpired was a 6-0 rout to advance to the knockout stage. Two goals each by Zardes and Aaron Long, along with a Christian Pulisic solo strike, remains one of the highlights of the year and a sign of bigger and better things to come in the 2020s.