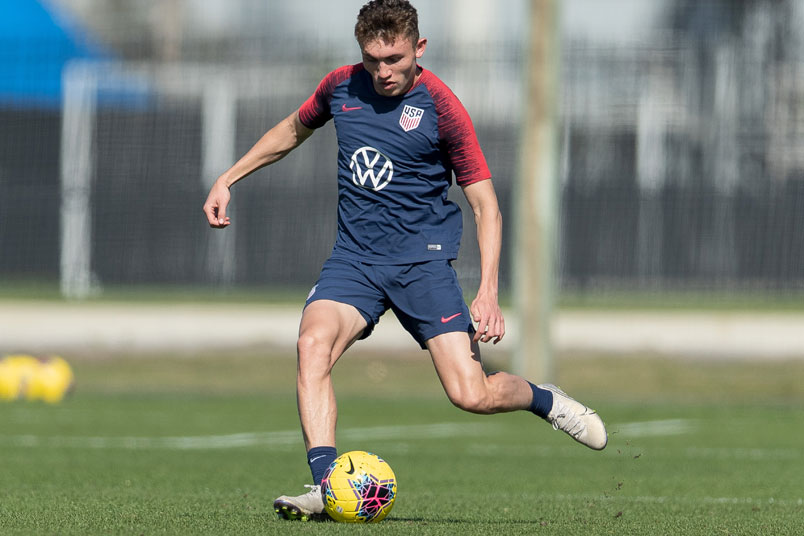 By Clemente Lisi – NEW YORK, NY (Jan 20, 2020) US Soccer Players – The annual January camp gets the year going for the USMNT, especially when it comes to young talent. While largely limited to MLS-based players and those in European leagues with a winter break, it remains an important part of the program. After all, these camps proved vital in the past, especially in years where World Cup Qualifying began. This is such a year. USMNT coach Gregg Berhalter will need every chance he gets to evaluate players in person before playing the games that count.

The initial drama of where this year’s camp would take place has subsided. Bradenton fills in for Qatar, with the camp ending friendly across the country in Carson. That means travel, but substantially less of it. The players have entered their daily routines of training and scrimmages. For MLS players, USMNT camp comes at the same time their club camps open. The MLS regular season starts at the end of February, with five clubs playing earlier in the Concacaf Champions League. That meant some of the familiar names were unavailable due to those club commitments.

For those MLS players in camp, it’s a slight jump on the season since the USMNT started earlier. It also allows them more time with Berhalter in advance of full squad availability during the March international windows. Berhalter has called in a mix of veterans and new faces.

In an interview with USSoccer.com, the coach said of the players, “At the start of an exciting year, this is a great opportunity to continue our process and build on the foundation established in the last 12 months. At the same, there are a number of players getting their first exposure to the senior national team who will be provided the platform to make a positive impression.”

The camp culminates with that February 1 friendly against Costa Rica at Dignity Health Sports Park. Here are five players to keep an eye on as Berhalter evaluates talent and formations in Florida.

The United States has been a developer of top goalkeeping talent since the early 1990s. That continues to be a strength of the program. Without the top two keepers on the depth chart available, Berhalter is looking at four candidates for playing time. Hamid, Sean Johnson (NYCFC), JT Marcinkowski (San Jose Earthquakes) and Matt Turner (New England Revolution). While these last two have yet to earn a senior camp, both Hamid and Johnson have caps.

Berhalter needs to bring three goalkeepers to the World Cup in two years. Hamid and Johnson are competing for spots. Both are the frontrunners to start against Costa Rica, allowing a healthy competition within the camp to see which one emerges on top. Hamid, part of the USMNT fold since 2012, has been a standout among goalkeepers in MLS. The 29-year-old hopes to continue that for the USMNT. Hamid has made it clear that he wants the opportunity he believes his MLS play is earning him. This is his camp to prove that point.

The New York Red Bulls defender had a great 2019. Strong in the back and not afraid to venture forward on set pieces, Long has made a strong case for himself when it comes to being a regular part of the USMNT lineup going into this year.

The 27-year-old center back has 16 caps and three goals for the USMNT since his debut in 2018. As one of the older experienced players in this camp, Berhalter will look for Long to provide both leadership on the field and in the dressing room, especially when it comes to the younger players who are in camp for the first time.

A product of the Colorado Rapids academy system, the 20-year-old defender is looking to earn his first senior cap for the USMNT. Vines is on the rise in MLS, becoming a regular with the Rapids last season.

Vines played in 26 MLS games in 2019, starting in 23 of them. That earned a closer look from Berhalter. Vines may be playing for a potential squad role right now, but he has the youth and ambition to move up the depth chart. It’s a promising international opportunity for an emerging talent.

The Galaxy player is one of eight midfielders Berhalter called into camp. With 13 caps and two goals to his name, the attacking midfielder is by far the most experienced among this cohort. Hampered by a series of injuries the past few years, the 27-year-old is looking to break into the starting lineup at this camp.

Lletget remains an interesting choice since Bruce Arena first called him into the National Team fold in 2017. He is a creative player, something Berhalter’s style needs. He can aid both the attack and the midfield when called upon. It’s that versatility that makes Lletget a contender for a roster spot going forward.

One of six forwards called up by Berhalter, the 18-year-old Llanez was born in California and is of Mexican descent. Although he was called to youth training camps for the Mexico Under-16 side in 2017, Llanez represented the USA at the youth international level in recent years with the U-20 squad.

Llanez is exactly the type of player Berhalter wants to look at up close and test in scrimmages against older talent. Although Llanez is one of 13 players in this camp with no senior caps, Berhalter could use him off the bench against Costa Rica, depending on how he performs over the next two weeks. With this kind of roster, the opportunity is there for players. That’s the reason for holding the January camp.