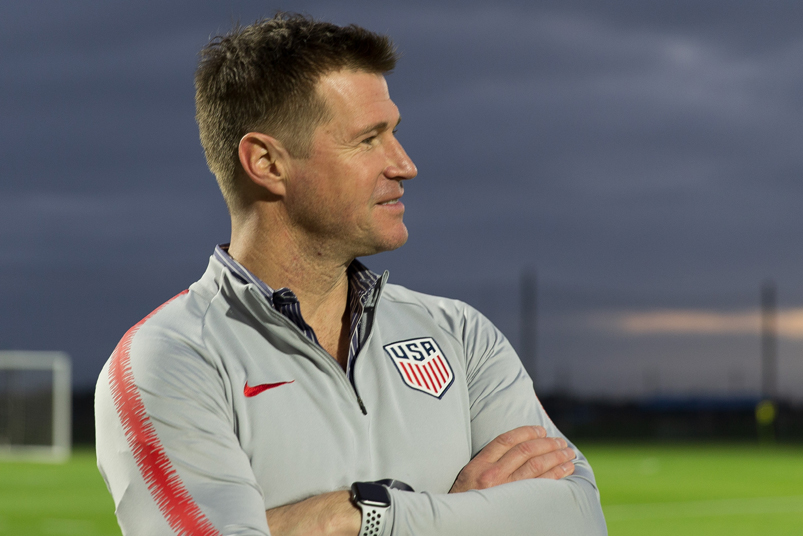 By Charles Boehm – WASHINGTON, DC (Jan 16, 2020) US Soccer Players – The new management structure for the USMNT program is slowly taking shape, as are the priorities and mentality of those in charge. This week new USMNT general manager Brian McBride was introduced to the media via a conference call, joined by his new boss sporting director Earnie Stewart. The two offered insight to their approach to the work at hand.

The duo suggested that one of McBride’s key day-to-day responsibilities will be cultivating relationships with US players and their clubs and coaches, and being a public face for the program in general. He’ll also need to put his personality to work as he keeps in touch with rising youth talents and dual-nationals. That, perhaps, is a recognition that players like Jonathan Gonzalez might’ve gotten lost in the shuffle in the past, with costly consequences.

“That is definitely part of the job description and interview process,” McBride said. “This is an important subject, it’s really high on the necessity list in trying to build relationships early, not only with the player but with the parents. Letting them understand exactly our view of the pathway for [that player] so when it comes time to make a decision, they have a clear understanding of our goals.”

McBride’s experience as a soccer executive is limited. However, his strong reputation and prior work in television should serve him well here.

“There are some innate qualities that a person has and that you need to have as a manager. When I look at Brian and those unique interpersonal skills that he has, they are outstanding,” said Stewart. “When it comes to that relationship-building and making sure that we’re collaborating with clubs and players and coaches on the other side – one, domestically, but, two, on the other side of the ocean – those are skills that are going to be very, very important for this job.”

The former teammates occupy two of the Federation’s newest executive positions, with more on the way. Former USWNT player Kate Markgraf took up the GM job on the women’s side in August. US Soccer has announced the hiring of several youth national team coaches in recent weeks with more on the way.

During the conference call Stewart revealed that a director of methodology will soon be hired as well, apparently to help synchronize the style and concepts of play across the youth and senior national teams. It’s all part of a wider push to build a stronger organizational framework and put “soccer people” in charge of soccer matters. That phrasing suggests that both things were not always in high supply under previous federation leadership.

For example, USMNT coach Gregg Berhalter reports to McBride and McBride will nominally have the power and perspective to decide when it’s time for a change in that position. It seems clear that one of the Fed’s chief lessons in recent years is the need to spread expertise and decision-making across a broader group.

“Hiring and firing by one person is not something we want to govern within the organization,” Stewart said. “Brian will be responsible for that, and we’ll obviously have discussions about that… if needed, we will act.”

Stewart and McBride carry USMNT backgrounds that played a significant role in hiring both of them. Meanwhile, several recent USSF coaching hires have come from overseas, like former U-17s coach Raphael Wicky, though others are foreign-born figures with US-based track records. Which begs the question: Do US roots matter more or less than an international perspective?

“I think you always first look in your backyard. What do you have in your backyard, and then you move further. And then you look at those different qualities that people have,” said Stewart. “You want to get the best person in front of it, but keeping in mind that we’re also growing the sport in the United States. So at some point, I hope we trend towards having every single thing in our backyard.”

“So that’s what we’re working towards. And sometimes we come across, like we did with Raphael Wicky going through the interview process, that Raphael was at a level that, 1) from a financial component but 2) just his experience as coach of Basel, that it’s too good to give up because you can influence your players at that moment. But obviously, we’re working towards making sure that we have everything in our backyard with our coaching education and the licensing that we’re doing and building our coaching pool as we have here in the United States.”

That said, he also emphasized the importance of cultivating what past generations of USMNT players have to offer.

“I think it’s really important that the generations we’ve had that have played at a high level, that they are all involved in the game itself and giving back to the game from their capacity,” said Stewart. “It used to be that little boys and girls that went to games, they were brought by their mother and father because they loved their kids, and now we’re actually having fathers and mothers who love the game bring their kids to a game, not only because they love their kids, but they love the game. And I think that’s an amazing part within this country where we’ve gotten to now.”