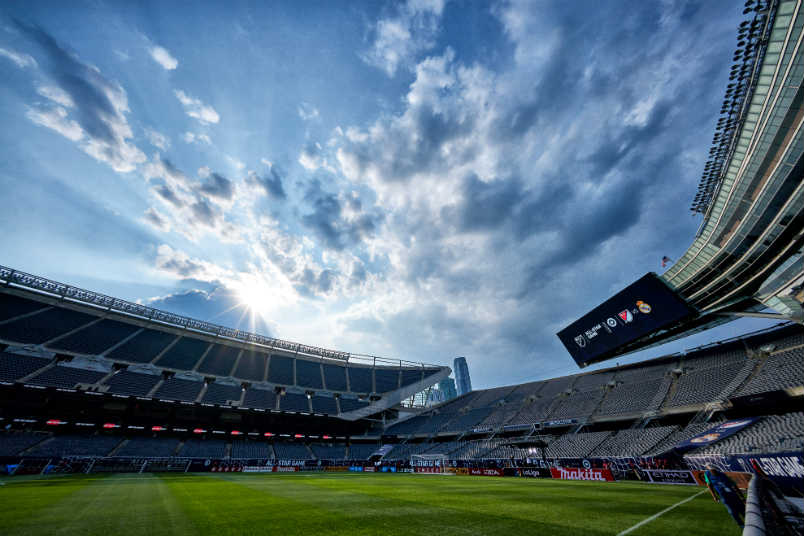 By J Hutcherson (Jan 7, 2020) US Soccer Players – We’ve reached the point in the preseason where all 26 MLS clubs have coaches. Welcome aboard Ronny Deila, a surprising choice to take over from Dom Torrent at NYCFC. Orlando City also left it late before officially announcing former Monterrey coach Diego Alonso. Then there was Chicago naming Raphael Wicky just after Christmas, the latest step away from that club’s tenure in Bridgeview.

For two of those three teams, it’s not just a coaching change. It’s also where they’ll play in 2020. Joining them are the two expansion teams in trying to provide a home-field environment in interesting circumstances.

Though in theory, it makes sense that both Nashville and Inter Miami belong in the Eastern Conference, the league was never going to put both expansion teams together. Even by Major League Soccer standards, that creates an unnecessary competitive imbalance. Avoiding that means Nashville goes West, starting play in an NFL stadium while they wait on soccer-specificity.

Nashville will eventually move to a 27,500 capacity venue at the fairgrounds complex. They start life in MLS with as many as 69,143 to fill at Nissan Stadium, the home of the city’s National Football League team. How many of those seats the team has to sell to build its reputation is the question. We have Minnesota as the most recent example for a team in a bigger stadium than the one that they eventually opened. Minnesota reduced capacity at TCF Bank Stadium to 21,895 eventually averaging just below that. It was the same season that Atlanta United realized they could sell over 70,000 seats for MLS games at Mercedes-Benz Stadium. That makes it tougher for Nashville, caught in between what’s realistic in MLS and what playing in an NFL stadium can mean. At least they’re starting out in their city.

It’s an interesting situation in South Florida, with the club playing in Fort Lauderdale like the Fusion before them. Just like the Fusion before them, there’s the expectation that this should become a truly Miami-based team sooner than later. That didn’t work out the first time, but the economic stakes are considerably higher now than they were for the 1998 expansion class. Back then, it was Chicago in the West with geography enough of an issue that by 2000 there were three divisions. In predictably MLS fashion, Tampa Bay ended up in the Central.

Geography aside, Inter Miami’s first year struggle is the same as all debuting teams face. It’s simple relevance, especially in a sports market with a reputation for not exactly going all in. The MLS season starts early enough that the NHL’s Panthers and the NBA’s Heat will still be in their regular seasons. The Heat is a Miami-based team. The Panthers aren’t. Comparing their attendances tells an unflattering story for hockey in the greater Miami area. That may sound as silly in concept as it does in practice, but getting people into the arena in Tampa hasn’t been a problem.

Inter Miami playing in Fort Lauderdale may help with that. The site of what used to be Lockhart Stadium is now a rotated field with seating for 18,000. Credit Miami for getting a stadium in place over a short window that they control, but it’s still that same old ask for South Florida fans. That shouldn’t be much of an issue given the capacity in the short-term, but it’s still a riff on the Fusion template.

Expansion teams get the benefit of time. That eventually runs out, with the expectation that eventually any MLS club will get it together.

With venue issues, NYCFC ended up one and done in the playoffs after winning the Eastern Conference. Toronto knocked them out at Citi Field rather than Yankee Stadium, with NYCFC now embracing their alternate Major League Baseball facility. The club was right to move four of their games to the weekend at Citi Field, working around the baseball schedule at Yankee Stadium. Still, it’s tough for any team to turn those games into what may end up feeling like a neutral site.

NYCFC won the East last season by six points, helped by Atlanta United taking so long to come together under new coach Frank de Boer. If playing in Queens turns out not to be the same as home dates in the Bronx, that could be the difference between contending at or near the top of the table and fighting for a playoff spot under a first-year coach. The margin isn’t there for much experimentation.

Experimentation is a polite way of describing what’s going on with the Chicago Fire this season. The team has a new logo, coach, and returns to the 61,500 capacity Soldier Field on the city’s lakefront. They’re also down one marquee player in an era where even smaller market MLS clubs know to spend. The current Fire roster raises plenty of good questions in need of appropriate answers. The club’s new investor/operator drew a line between then and now with intent. How the revamp works out at Soldier Field is now wrapped up in a bigger question about soccer-specificity, schedule control, and urban locations in the league.

With the Fire eventually paying Bridgeview $65.5 million to not play there, Soldier Field has to be better. That means more people showing up for games along with becoming a playoff-caliber team under a new coach. It’s a huge ask in any circumstance. Right now, even in an expansion season, it’s turning Chicago into the most important story in MLS.