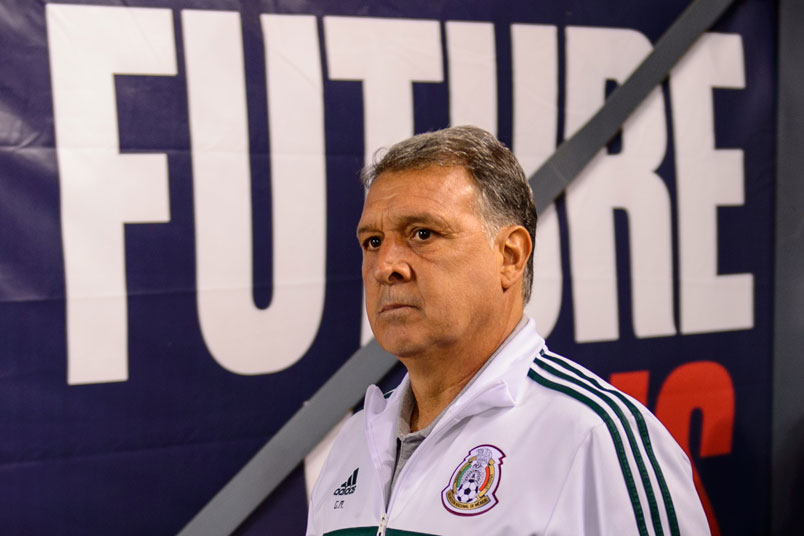 By Clemente Lisi – NEW YORK, NY (Jan 27, 2020) US Soccer Players – It’s an interesting 2020 in Concacaf, especially for old rivals the United States and Mexico. Both have the Nations League on the schedule in June and the start of World Cup qualifying in the September international window. Between now and then, there are friendlies on the schedule to provide options and tighten things up before the games that count. What we can expect tactically from El Tri over the next few months is crucial in trying to understand where coach Gerardo Martino is trying to take this team.

Martino, no stranger to MLS fans for his time with Atlanta United, enters his second year as Mexico coach. It’s a good time to assess what he’s brought to this team. It’s also worth looking at the tactics from his version of E Tri over the last 12 months as an indicator of what 2020 will bring.

Coaching a National Team carries its own difficulties. Coaches don’t spend a lot of time with players and only play a few games spread out over the year. Martino knows that from his own experience coaching his native Argentina. Over the past few years, he’s also coached Barcelona and Atlanta to varying degrees of success. It’s all those experiences Martino brings to the table, a hodge-podge of styles and players though a few constants persist.

Martino has favored a 4-3-3, something we saw in the Gold Cup last summer. Even with a depleted roster, the tactics helped Mexico win the tournament. At the Gold Cup, Martino relied on a team that emphasized passing and getting as many shots on target as possible. It’s a winning formula that seems simple.

Ultimately, Martino’s job is to raise Mexico’s game to a level where this team can compete with the best in the world, not just the region. Concacaf gets little respect around the world when it comes to its strength of competition. Still, this is often a confederation where upstarts can pull off surprises that leave the heavyweights faltering. An excess of confidence can sometimes be a bad thing when playing Jamaica, Costa Rica, or Trinidad & Tobago.

In an interview with Mexican network Televisa last year, Martino said that coaching El Tri “will be one of the toughest challenges of my career, without a doubt.” There’s also no doubt that he meant what he said.

For Martino, the honeymoon period is over. This year will provide a tough challenge with the Nations League and World Cup Qualifying on the horizon. What can we expect tactically from Martino this year? Martino’s predecessor Juan Carlos Osorio also relied heavily on the 4-3-3, something that became predictable to opponents and limiting in games that mattered.

Like any good coach, Martino does have a Plan B. In the Nations League last year, Martino utilized a 4-4-2. It all really depends on the health of his players in games that matter and how much experimenting Martino will want to stomach in upcoming friendlies this March against the Czech Republic and Greece. At the international level, Martino has not had the same success he’s had throughout his club career.

Martino isn’t necessarily married to a particular formation. He’s also used a 4-2-3-1 and with Atlanta a 3-2-5, but possession remains a big part of his tactics. This comes from his time at Barcelona. Their, Martino inherited the tiki-taka style that defined the Catalan club over the past two decades.

Martino bases his strategy on maintaining the ball, a sturdy defense, and utilizing midfielders who can both attack and defend. Those traits come regardless of formation. Having said that, Mexico isn’t likely to go with an Atlanta-style 3-2-5. They don’t have a strong center back like Rafa Martinez or that much depth in attack. That was obvious in Mexico’s 4-0 loss to Argentina in September, where center backs Nestor Araujo and Carlos Salcedo had a very bad outing.

One of Mexico’s strength is in possession, a cornerstone of what Martino is building. That centers around players like forward Chicharito Hernandez and midfielder Andres Guardado. Creative players are always welcome on Martino’s teams. Look for that to be something key for El Tri over the next few months.

In the past 26 years, Mexico has had 16 coaches. Tactical choices lead to results one way or the other. For his part, Martino will need another strong year. There’s no job security with El Tri. Every international window is a Mexico coach at risk of joining the group of other men who used to coach the national team.