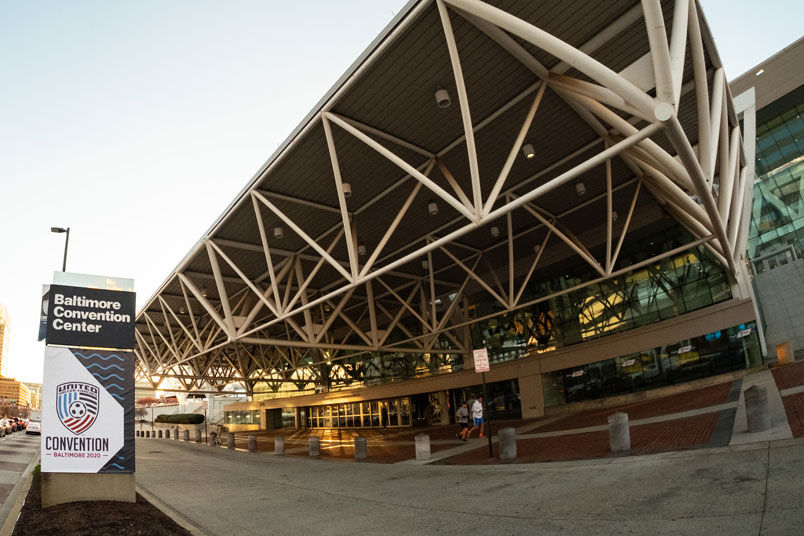 By Charles Boehm – WASHINGTON, DC (Jan 23, 2020) US Soccer Players – It’s drawn comparisons to a family reunion, an enormous produce market, the world’s largest collection of tracksuits, and the Mos Eisley Cantina from Star Wars, among others. We’re talking about the annual United Soccer Coaches Convention, of course. This unique date on the American soccer calendar unfolded in Baltimore last week, the latest edition of one of the largest soccer-related gatherings on the planet and a tradition dating back to World War II days.

The Baltimore Sun reports that according to USC, their event includes “more than 250 educational opportunities, draws in about 14,000 attendees and generates $15 million-$18 million for the host city.” Here are a few of the predominant observations and topics from three days spent in and around the Inner Harbor during #BMORE20.

Less MLS, but the show goes on

This year marked the first time in more than a decade that Major League Soccer did not hold its SuperDraft at the convention. Instead, MLS did away with the physical event and opted for a live stream. Beyond the immediate effects on the draft process itself, MLS also elected not to hold its usual accompaniment of league-wide meetings as part of the convention.

For the convention, that meant less of an MLS presence even with league coaches and others holding several educational and informational sessions. It’s up for debate whether that loss of exposure among the conclave of industry influencers is worth worrying about. Things did feel a bit different around the Baltimore Convention Center.

It’s become increasingly common for figures from MLS, US Soccer, and others to hit town for meetings even while never setting foot in the actual center itself. Some set up camp in adjacent hotel lobbies. Others prefer to gather in local bars. However, in terms of official representation, one organization in particular was well-positioned to step into any vacuum left by MLS. It’s worth noting that the NWSL conducted their live draft as part of the convention as usual.

USSF stays in the spotlight

It’s no surprise that the US Soccer Federation was an easy discussion topic at the convention. With a USSF vice-presidential election coming up and the CEO position still unfilled, this year was no exception.

Much of the chatter I heard in Baltimore centered around the changes at Soccer House, most of all by president Carlos Cordeiro and USMNT GM Earnie Stewart. In general terms, the narrative is that the highly top-heavy, shoot-from-the-hip decision-making of the Sunil Gulati and Jurgen Klinsmann eras is on its way out. In its place is a more process-oriented collective approach.

Is this a more effective and inclusive mindset? Or does it risk bogging things down with ponderous processes and paralysis by analysis?

Meanwhile, the Fed’s plans for putting its nine-figure budget surplus to use are coming into focus, with a projected operating deficit of $27.5 million for the 2021 fiscal year. US Soccer leadership made their intentions clear at a Board of Directors meeting last month. They intend to spend down more than half of the surplus in the coming years on efforts to fuel development initiatives and other on-field investments. Speaking of the surplus, a legacy of the highly profitable 2016 Copa America Centenario, there just happens to be another event on the horizon with a similar potential impact.

Six-plus years might seem like a long time for many of us. Yet in the longer timelines of big business, the 2026 FIFA World Cup in North America is just around the corner. Signs of that were in evidence in Baltimore.

Given the lessons of Copa Centenario 2016, the ’94 World Cup, and all the growth of the past quarter-century, 2026 should be a massive watershed for the sport and its place in American culture and business. New entities are already cropping up to stake out territory in this potentially revolutionized landscape. There’s already a particular focus on providing newcomers with connections and expertise to help them craft their soccer footprint.

“The Business of Soccer Happens Here” is a motto of the USC convention, particularly its sprawling exhibition hall. You can expect this process to ramp up at feverish rates in the next half-decade.

Every year USC builds several indoor pitches for the convention’s field sessions. The complexity and variety of the different playing surfaces are a reminder of that specialty’s explosive growth. We’ve now reached a point where the inevitability of turf’s presence in the game is generally accepted, but that doesn’t stop the conversation.

One key area of differentiation is infill. Increasing concerns about the drawbacks of recycled-rubber pellets are leading to new wood, cork, and sand-based alternatives. That could help reduce some of synthetic turf’s most commonly-lamented shortcomings.

Baltimore as a soccer city

It’s been years since serious talk of Baltimore as either an MLS expansion city or the home of a relocated DC United when that team was still searching for a stadium. Every few years, Baltimore becomes a hotbed of American soccer as one of the convention’s regular host cities.

The USC spotlight is a timely reminder of Baltimore’s love for the game and also asks a question. Even with DC more or less an hour down the highway, how on earth is the city still without an upper-tier professional club? If USL can resolve some of the trickier issues around its long-running bid to set up a team there, it has a chance at a real success story.