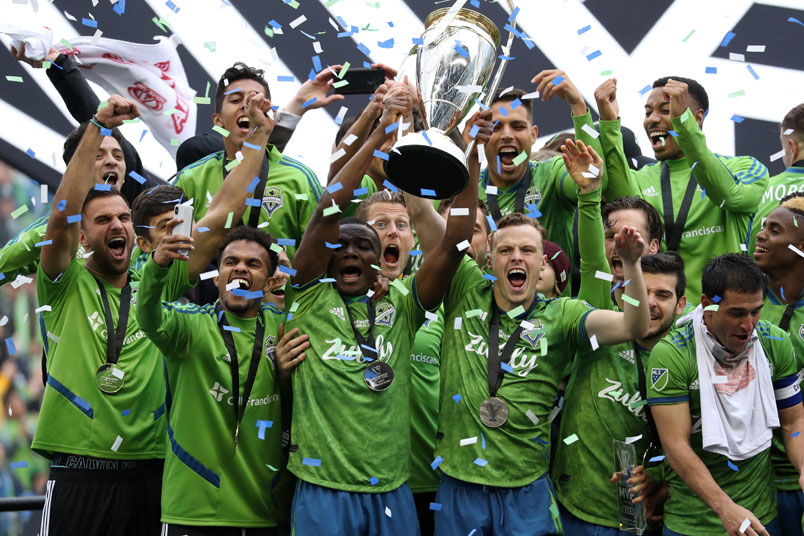 By Jason Davis – WASHINGTON, DC (Jan 17, 2020) US Soccer Players – On the one hand, being Major League Soccer champions two times in four years is pretty good. Add in that third trip to the title game and it’s closer to great than pretty good. The Seattle Sounders aren’t yet a true MLS dynasty, but they’re about as close as a club can get. Seattle’s achievements reflect well on the work of everyone involved with the team. Remember, Seattle has never missed the playoffs in the team’s 12-year history.

On the other hand, that much winning creates elevated expectations. The Sounders aren’t allowed to suffer through a bad year. The fans demand excellence because the club has conditioned them to expect it. The bar is always the MLS Cup title. Contending is the bare minimum.

Soccer doesn’t stop and there’s no time to rest on the laurels of victories past. You’re only as good as your last season. Running a club isn’t just about the current campaign. It’s a mix of fixing in-season problems on the fly while planning for future campaigns.

While that type of reality exists in most of the major American sports, it’s rare in the world of soccer. Few leagues in the world have the sort of restrictions on player acquisition that exist in MLS. No league is so dedicated to its concept of parity.

Strategic thinking matters elsewhere in the world. While no successful club is wholly dependent on money, but there is always a safety net available to the leading lights of Europe. Spending massive fees on players can be risky, but it also provides for a margin of error that allows even poorly run teams to succeed in certain situations. Everything is relative. So as long as a club has a significant resource advantage over its league rivals, the chances of lifting a trophy at the end of the season are pretty good.

That’s especially true in leagues without playoffs to decide the winner. In a playoff environment, a massive advantage in talent might not win against a good gameplan or superior effort. Over 30-plus games, the more expensive roster will generally win out.

Running a successful European club is by no means easy. Most leagues possess at least one or two challengers for the throne that make no season a foregone conclusion. For the biggest spenders, there’s also the Champions League. That competition pits equally rich clubs against one another without the same familiarity as domestic soccer.

So how can the Sounders stay atop the MLS mountain? Whatever advantages the Sounders have in resources, the league dictates that they can only flex their money in limited ways. More problematically, the MLS salary budget structure nearly guarantees that every successful team they build will have a ticking clock.

There are salary demands as players emerge as stars. There’s age. Pay more to core players, and the backend of the roster gets squeezed. Try and nickel-and-dime those critical contributors, and everything could fall apart.

Seattle wants to win the Concacaf Champions League. It’s a stated goal of the club from the owners on down. Their general manager, Garth Lagerwey, came the closes with his old club. Back in 2011, the Real Salt Lake team he constructed with head coach Jason Kreis went to the final before falling to Monterrey. No MLS team has bettered that performance, despite the clear advancement of the league since then.

Real Salt Lake managed to put together a team that nearly won it despite a paucity of resources, relative to both MLS and Mexican competition. RSL wasn’t dropping seven-figure transfer fees then or now, but still managed to play one of Mexico’s richest teams down to the wire.

Seattle is a different scenario. In most years, we might find a reason to talk ourselves into believing the MLS Cup champions could get it done regionally. Still, this is MLS.

Unlike some of the other clubs that have set aside any concerns about the next collective bargaining agreement, Seattle has seemed hesitant in the market. They’re reluctant to hand out long term contracts without knowledge of what the deal between the players and owners will look like. It’s impossible to know if the Sounders planned any real overhaul heading into 2020. So far, they’ve done very little business.

The Sounders situation is notable, but it’s not unique for MLS clubs. The league’s best teams tend to be the most mature. In a system that restricts salaries, that necessarily forces difficult decisions. Those teams that go into the Concacaf Champions League off of an MLS Cup title aren’t always the best equipped to break the Mexican grip on the continental championship. Logic suggests that they should, but nothing in MLS is that easy.

Seattle is still a favorite to advance well into the upcoming Champions League, but it’s the latest version of an old MLS problem. It’s the risk of the dropoff from focusing too heavily on the Champions League at the expense of the MLS regular season. This is still Seattle, where the expectations are always high. 40,000 people show up at CenturyLink Field every home game to support a team they believe will always compete for trophies.

In some leagues, those fans might have a reasonable guarantee that their club will end up with at least one piece of silverware. And if not? The club could just spend money to get better and improve their odds. That’s not how it works in MLS. The expectations might be similar, but the degree of difficulty is something else.