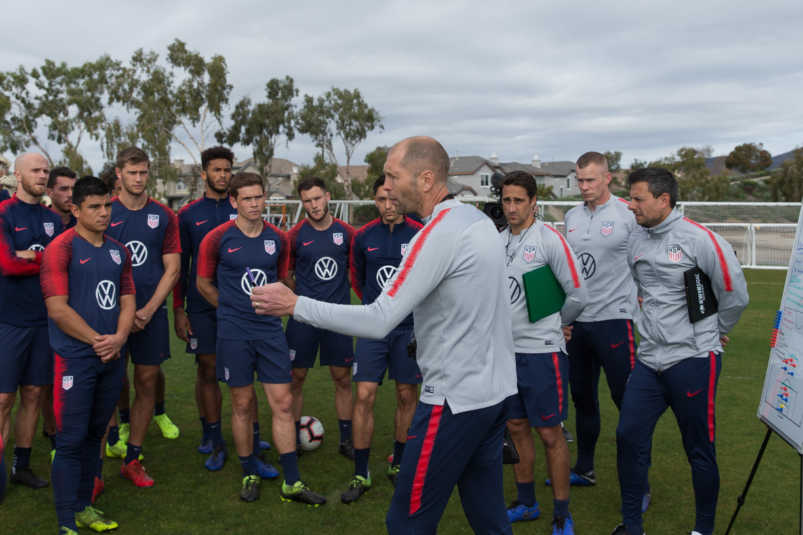 By Jason Davis – WASHINGTON, DC (Jan 3, 2020) US Soccer Players - Gregg Berhalter's roster for the 2020 edition of the USMNT January camp tells the story of what he hopes to achieve with the month-long exercise as a decisive year for the team and the coach himself gets underway. Berhalter's list of 25 names includes a few players with years of national team experience and the requisite cap numbers to show for it. Names like Jordan Morris, Paul Arriola, and Gyasi Zardes remain in the national team picture even after several years of turmoil because of their consistency and commitment. The need for players who will give everything they have, regardless of the stakes, cannot be overstated.

The bulk of this group, however, is raw and untested. The January camp-cum-friendly is a chance for the national team coach to dig deeper into the player pool, potentially unearthing new or previously unnoticed talent that could help the team in the future. Because of the timing of the camp, it mostly focuses on domestic and out-of-season players.

Jozy Altidore is a good example of the role the January camp plays in the development of the USMNT. In 2008, the then-New York Red Bull got his first chance to play for the senior national team in a friendly against Mexico to close out a January camp. Altidore has been a fixture ever since and is now third on the all-time scoring list for the national team.

Altidore isn't in this camp after a long MLS season and a spate of injury problems. Instead, Berhalter will look to his mixed group, with even the veterans still on the younger side of their careers, to lead the way for the new faces in the squad.

Behind the more experienced players like Arriola and Morris is a collection of MLS prospects who aren't new to the USMNT but aren't yet fully established as regulars. Reggie Cannon, a breakout player during the 2019 Gold Cup, and his FC Dallas teammate Paxton Pomykal fit into that category. Both have palpable potential and looked primed to play a roll in the busy 2020 calendar. Jackson Yueill elevated himself into the national team picture towards the end of 2019 and will be in the January camp for a chance to build on some impressive play.

A sprinkling of veterans and a few recently relevant names. Then it's a group of uninitiated players, a few of whom have yet to even play at a senior professional level. For observers of the program and Berhalter, these are the names that stand out. Some of them will be unknowns to even the most ardent watcher of the USMNT. That only ratchets up the anticipation and feeds ideas about their potential.

Top of the presumed potential list is 18-year-old forward Ulysses Llanez, currently working his way through the Vfl Wolfsburg system in Germany. Llanez joined Wolfsburg from the LA Galaxy academy, where he made his name as a talented frontline play with a penchant for scoring goals. Llanez is known for his ability to dribble past defenders, creating the space necessary to find dangerous shots. Llanez played for every level of the US youth national teams, most recently collecting 11 caps with the U-20s.

What Berhalter intends for Llanez is tough to say . Until he makes his Bundesliga debut, it's tough to pencil him in on the forward depth chart. Llanez could play a big role in the US U-23 team, which will be attempting to qualify for the Olympics for the first time since 2008. Berhalter and the decision-makers at US Soccer see the Olympic tournament as an important marker on the path back to respectability. They're using the January camp in part as a chance to put some age-eligible players through their paces. Despite playing in Europe, Llanez is available because he's not yet a senior Wolfsburg player. That's a boon for Berhalter.

Llanez isn't the only player in the group without much of a senior-level history. Former DC United academy player Bryang Kayo is an even bigger surprised as a call-up than Llanez. The 17-year-old has just three appearances at the USL Championship level with Loudoun United as an amateur. United was unable to hold onto Kayo, who signed with Orange County SC in September. US Soccer's roster lists him as "unattached." What's next for the lanky box-to-box midfielder on the club side is unclear. By calling him into the January camp, Berhalter and his staff seem to be high on Kayo's future.

Kayo will compete with Cristian Roldan, Yueill, and Brenden Aaronson for a chance to play against Costa Rica when the USMNT returns from Qatar for the February 1 friendly. All of those players are age-eligible for the Olympic qualifying team as well.

Youth is also evident in defense. Berhalter called up Galaxy fullback Julian Araujo, a Mexico-eligible 18-year-old who broke into Guillermo Barros Schelotto's lineup late in the 2019 season. Araujo's maturation stokes the battle at the right-back position, where Berhalter suddenly has several options.

While DeAndre Yedlin is the most accomplished of the candidates, Reggie Cannon's emergence at the Gold Cup and subsequent establishment as a USMNT regular makes the position one of the more contentious on the field for the Americans. Cannon, just 21, comes into the January camp with the experience of 2019 and a chance to take the position for himself.

On the other side of the formation, 20-year-old left-back Sam Vines of the Colorado Rapids will get his chance to make an impression in the January camp. Vines came up through the Rapids system and locked down a starting spot for the club in 2019. He figures to be a part of the U-23 pool, particular with other left-back USMNT options either too old or already elevated to the first team.

All told, this is one of the more intriguing USMNT January camp rosters in recent memory. For Berhalter, the camp is a chance to get a close-up look at players that piqued his interest but were not part of the process of rebuilding the first team throughout 2019. It's a chance to lay the groundwork ahead of Concacaf Olympic qualifying and to get a first look at the environment in Qatar, site of the 2022 World Cup.

There's value in playing Costa Rica, a notoriously tough regional opponent, to close the camp. Still, January isn't really about the friendly that ends the month. It's about the three weeks the national team coach gets to try new ideas, establish a culture, and dig deep for talent that exists beneath the surface of the USMNT player pool. Berhalter intends to use that time for all it's worth.