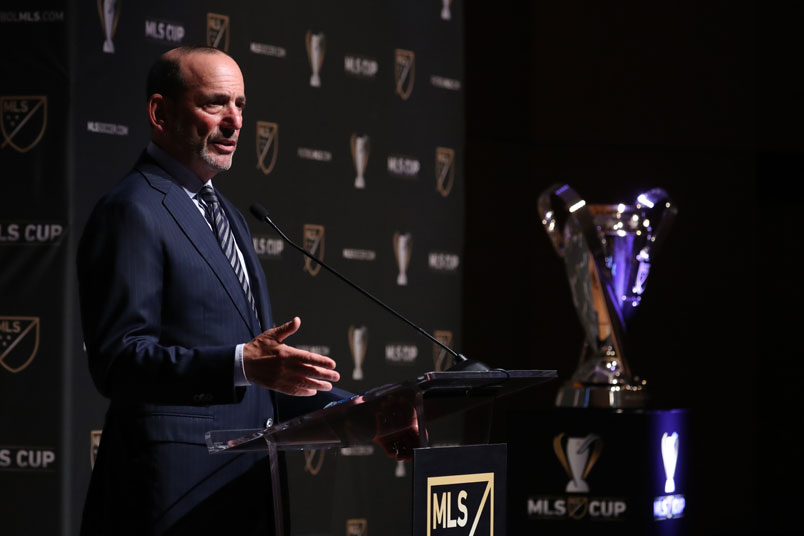 By Charles Boehm – WASHINGTON, DC (Feb 28, 2020) US Soccer Players – Major League Soccer’s 25th season opens at 13 stadiums across the continent this weekend. Are you tired of waiting for the 2020 campaign to begin, or are you not quite sure how it’s already arrived?

Fans have justification for both states of mind. MLS is kicking off earlier than it ever has, a week ahead of last year’s opening and some six weeks deeper into North American winter than its inaugural season in 1996. Conversely, it’s been many years since everyone had to wait this long for the action to return. With the 2019 schedule shortened by a month, MLS Cup happened 16 weeks ago. Teams that missed the playoffs haven’t played a competitive game since October 6.

Thanks in large part to the league’s enormous geographic and climatic diversity, expect a wide array of conditions and quality levels on opening weekend. That should hold for the season’s first month or two in general. A February matchday in balmy California or sunny Florida can look and play a whole lot different than in crisp Columbus and Foxborough, or under the domes in Montreal and Vancouver. Correspondingly, attendance will vary as well. Half-empty venues in some chilly locales are an MLS early-spring tradition. At least once a year or so, a spring game will play out in a snowstorm or a deluge.

Players’ levels of sharpness are an open question, too. MLS’s five Concacaf Champions League participants have looked well short of full match fitness in that tournament’s opening round. Those teams are all at least a week ahead in preparations. Rosters will also remain in flux for weeks to come, with new signings still straggling in and playing catchup.

There’s an argument that it’s better to risk old man winter disrupting the early stages of your season than its closing phases. Still, it’s not exactly the perfect circumstances in which to re-introduce your entertainment product to your local and national audiences. League leaders seem content to push on for several reasons.

An obvious one is the long-running unrequited desire to the Champions League, or at least show progress in it. With most of the rest of the leagues in the region already underway for several weeks, MLS improves its competitive outlook in the CCL significantly with every additional day it can stack onto the front end of the overall schedule. If Concacaf’s format seems unfair to the US and Canadian clubs, remember that they complained as much or more about the previous format, with a group stage in late summer and knockout rounds the following spring. Now at least the bracket usually gives them a round or two to find their form before they meet Liga MX opposition.

MLS also appears to be methodically workshopping some of the top recommendations of the sweeping study conducted by the Boston Consulting Group four years ago. That fascinating document, brought to public light by The Athletic, urged the league to make several changes to improve its profitability, television ratings, and overall competitiveness with other top sports products in the market.

Those observations seem to have been influential on the decision to shorten the season, enabling MLS to observe FIFA’s fall international windows and sidestep the stiffer competition for sports TV eyeballs in late autumn. That also puts the playoffs, which generally should feature the best and most important games of the year, in milder overall playing conditions. Tournaments like the US Open Cup and Leagues Cup could shift around significantly to maximize attention, ratings, and profits.

However, it provoked the immediate drawback of a suddenly plump offseason. While still briefer than the offseason in most North American pro sports, MLS’s looks ludicrously lengthy compared to top European and Latin American counterparts. In a global sport, there are real consequences to this much downtime, and they tend to fall on players far more heavily than executives.

We can probably expect opening day to drift deeper into February in the years to come, considering that BCG also urged MLS to exploit that month’s traditionally lower TV viewership levels. All this doesn’t even broach the contentious idea of matching up to the standard European fall-to-spring format.

The MLS calendar has expanded and contracted like an accordion over the years. It originally ran from April to October, a reflection of both the old reliance on residence at NFL stadiums and the calculation that a large part of the ticket-buying public are quite literally fair-weather fans. Over the past quarter-century, it slowly but steadily grew as the league expanded and got more ambitious. Outside voices still called for even more “season creep,” most prominently former USMNT coach Jurgen Klinsmann back in 2011.

Klinsmann is no longer the league’s chief gadfly. Lately, the bellows have shifted again. Commissioner Don Garber & Co. have been juggling all these coinciding and often-competing priorities in search of the perfect balance, and look likely to continue tweaking for the foreseeable future.