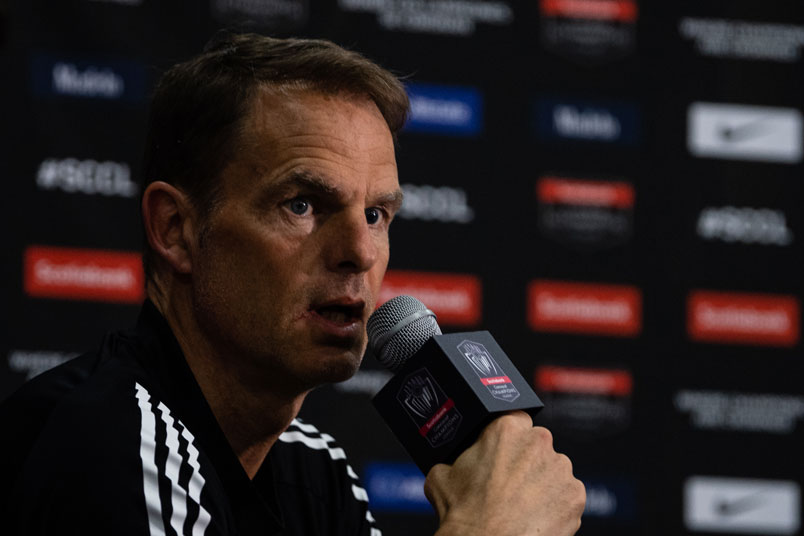 By Jason Davis – WASHINGTON, DC (Feb 19, 2020) US Soccer Players – Pressure is a function of the schedule, except when it isn’t. For coaches headed into the 2020 season with expectations already in place, it’s possible to be under the gun even before the games begin. The real heat will come with the matches that count, but not every job is created equal. History is a burden and a blessing.

That’s that situation in Atlanta for head coach Frank de Boer. He eked out a decent season in 2019, leading the Five Stripes to a conference final despite a rocky start to his first campaign in charge of a team fresh off a championship in 2018. De Boer always seemed like an odd choice to take over a team known the speed of their attack. At various points in the season, frustration threatened to boil over.

If de Boer coached almost anywhere else in Major League Soccer, he’d likely be heading into 2020 with a full mandate and a cool seat. There are clubs across the league entering the year without a final four appearance to their name from last season, playing under the same coaches that finished out the year. In almost every case, they will be under less pressure than Atlanta United’s boss.

We can put aside some of the first-year coaches in MLS for 2020, as well as a few that arrived late in 2019. They’ll get a proper start to the campaign this year. That group includes Robin Fraser, the man who replaced Anthony Hudson as Colorado’s head coach at the tail end of 2019 and made headway with a group of young players.

Because the Rapids have struggled mightily to find decent players under a limited budget, there are almost no expectations for the team this season. Simply making the playoffs would be a triumph, a fact that gives cover to Fraser and the leadership at the club. The ironic thing about consistent failure is that it makes even a modicum of success look like an achievement.

The same limited expectations and lack of pressure exist in Chicago, Houston, and Montreal. The pressure on the head coach in Montreal usually comes more from ownership than it does from the fan base, but the man in question in 2020 is one of the greatest footballers of his generation.

Will his famous name buy Thierry Henry more time to figure out the league and get the Impact playing winning soccer? Or will the typical dynamics in Joey Saputo’s club come to bear on a young coach who failed spectacularly at his only stop before arriving in MLS? No matter how itchy Saputo’s finger can get, it seems likely that Henry will get plenty of time.

Tab Ramos can expect as much in Houston, as well. The Dynamo head coach is in the unenviable position of “savior” for a club that doesn’t spend enough money to give itself much room for error from year-to-year. Ramos brings a new optimism. There’s hope that the club will improve, but a coach can only do so much. No one will be jumping to criticize the new boss if Houston plays good soccer but still can’t get the results necessary to compete with the best in the Western Conference.

Chicago’s situation is complicated by wholesale changes, from the investor/operator down through most of the roster. No team in the league jettisoned more of its squad than the Fire. It’s up to new head coach Raphael Wicky to bring together a new group. The Fire’s winter activity has mostly been of the “under the radar” variety, with no big-name or multi-million dollar acquisitions.

The Fire needs to win games to capture the attention of a fractured soccer market as the move into the expansive confines of Soldier Field. There’s not much reason to think that new investor/operator Joe Mansueto or new general manager Georg Heitz is going to hold Wicky to an unreasonable standard. This is a hard reboot of the Fire and Wicky is well-regarded. Jumping from coach-to-coach with everyone still learning the ropes doesn’t make for a stable foundation. The Fire would never say that 2020 is a rebuilding season, but it’s difficult to see it as anything but. The smart money is on Wicky getting a pass this year.

Diego Alonso in Miami and Gary Smith in Nashville deserve a mention if only to establish that they, too, will get the benefit of the doubt. Last year’s expansion club, FC Cincinnati did fire their first MLS coach just a few months into the inaugural campaign, but the club was playing historically bad soccer at the time. Nashville and/or Miami could find themselves setting records for futility, but that’s not the expectation.

Inter Miami has a talented, if unbalanced, squad, while Nashville looks built to play defensive soccer. For Nashville, the defensive strength will keep them in games and save Smith from significant pressure early on. Alonso can only get in trouble if the soccer is too bland for the fan base in Miami. The presence of Rodolfo Pizarro in the squad should preclude that possibility.

A sprinkling of other names might face some sort of strife if things don’t go well in the beginning, but most will get the benefit of the doubt. Oscar Pareja in Orlando. Freddy Juarez at Real Salt Lake. Marc Dos Santos in Vancouver, though he will be the most closely watched of the second-year group because of the Whitecaps’ track record.

FC Cincinnati’s mess now that Ron Jans has resigned will fall at the feet of 29-year-old Yoann Damet. The club says it intends to conduct an “international search” for Jans’s replacement, though it’s unlikely they’ll find an adequate replacement in the short term. Considering the circumstances, Damet won’t be under any pressure. Nothing that led to his second stint as the interim boss was his fault.

De Boer’s competitive year has already started. A 1-1 draw in Honduras against Motagua in the first leg of the CONCACAF Champions League Round of 16 is an acceptable result with the home leg to come next week. However, it won’t do much to lessen the pressure he’ll face going into the new season.

What happened in 2019 looms large in Atlanta. His decision to acquiesce to his personnel paid dividends and saved what might have been a lost season. He deserves credit for that and for pushing Atlanta back to the brink of the MLS Cup final. None of that will save him if United starts 2020 poorly or doesn’t live up to the brand of soccer its fans have come to expect.

In three seasons, Atlanta has established itself as one of the most ambitious teams in MLS. Ambition breeds expectations. Expectations bring pressure. No one in the league is feeling the pressure more than the man at the helm of Atlanta United.