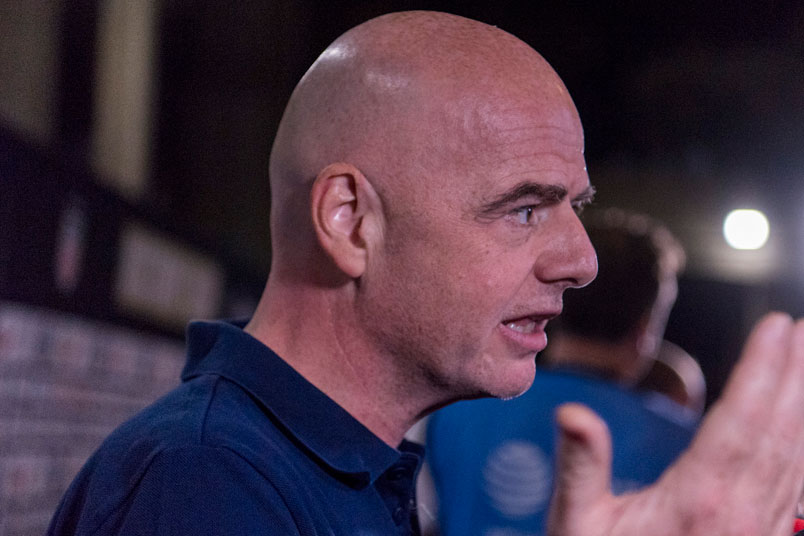 Monday's soccer news starts with the soccer calendar. FIFA controls the international dates, but it's not a unilateral imposition on club soccer. The single match dates went away a few years ago in part due to pressure from the clubs. That's normally Europe, not wanting multiple breaks in their season. There's continued pressure to further streamline the calendar, even in the era of FIFA expansion and moving the 2022 World Cup to November and December.

FIFA president Gianni Infantino is continuing what he started when he worked for UEFA. Bigger and more lucrative tournaments. With FIFA nominally in control of African soccer after issues with CAF, world soccer's governing body made an interesting move. Cameroon was an unlikely host for what became a summer tournament, and now the Cup of Nations is back on its old January schedule. That's a problem for European clubs, who would prefer not to have to release players for a continental championship when there are league games to play. FIFA may have a partial solution to that, with Infantino arguing for a more lucrative version of the Cup of Nations.

Infantino is suggesting Africa consider following the example of CONMEBOL's Copa America like UEFA's Euro schedule. That means playing every four years rather than two. AP's Graham Dunbar has the details from Infantino's speech in Morocco over the weekend. As that article makes clear, moving the Cup of Nations to January also means no conflict with the revamped Club World Cup in the summer of 2021. It also makes Concacaf's Gold Cup the outlier.

Concacaf is on an every-other-year schedule for their confederation championship, with the next edition scheduled for the summer of 2021. The Gold Cup starts two days before the Club World Cup final, with FIFA's event concluding on July 4 in China. Since it's a safe assumption that a Liga MX or MLS team will represent Concacaf at the Club World Cup, it's an issue.

It's probably worth the reminder that Concacaf's championship also used to happen in January and in even years rather than odd. Things can change, with the Copa America moving from every other odd number year, to every three years, to back-to-back, and now every four even years starting this summer. If FIFA establishes that as the slot for confederation championships, it's likely that the rest of the confederations will fall in line.

What this means is an international calendar in flux but with FIFA in control. Suggestions tend to become mandates, with world soccer slotting in accordingly. The latest example of that is the Club World Cup taking the Confederations Cup slot. That's FIFA moving from country to club and attempting to turn an easy to overlook December tournament into a true world championship. It follows rescheduling the next World Cup and expanding it in 2026. For all the complaints, FIFA regularly gets its way.

Yahoo Sports' Doug McIntyre looks at the USMNT's win over Costa Rica. SI.con's Grant Wahl on the USMNT's youth heavy lineup. American Soccer Now's Brian Sciaretta highlights the key contributors in the USMNT win. ESPN's Jeff Carlisle with what this version of the USMNT may tell us. The LA Times' Dylan Hernandez with the bigger picture for the USMNT under coach Gregg Berhalter.