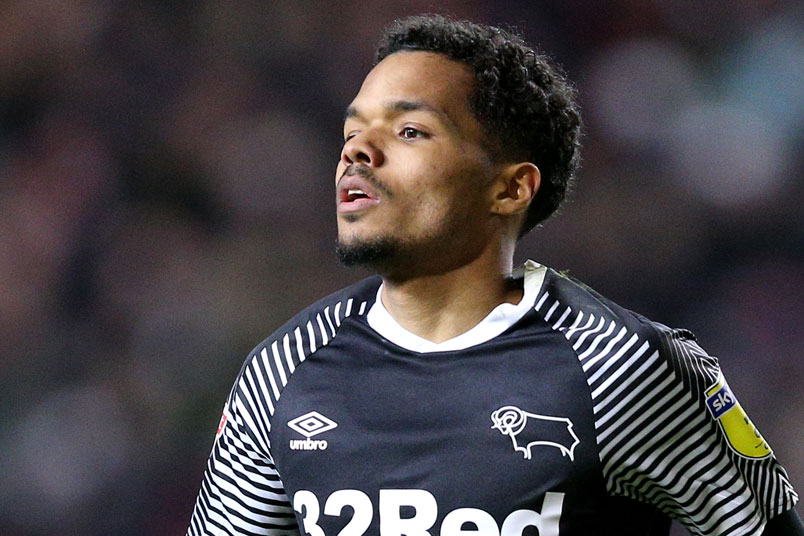 “With Holmes, it is an ankle issue,” Derby County manager Phillip Cocu said. “He got a kick and then twisted, so we need to probably scan him on Monday.” Cocu had complimented Holmes on his early play, saying, “In the first 10-15 minutes we couldn’t find the openings we wanted, so we had to play more balls in behind. I decided to put Duane Holmes in the midfield and Martyn Waghorn on the right so Duane could fill in positioning in the pockets and create more. From that moment I think we got into the game and created more chances. We took more initiative and had control over the game.”

Also in the Championship, Tim Ream’s Fulham lost 3-0 at home to Barnsley. Fulham gave up a 24th minute penalty with Barnsley adding goals in the 51st and 79th. Geoff Cameron’s QPR beat Stoke City 4-2 at home. Falling behind to goals in the 27th and 31st minutes, Jordan Hugill scored for QPR in the 34th with Eberechi Eze equalizing in the 38th. Bright Osayi-Samuel made it 3-2 in the 71st with Ilias Chair scoring a minute into stoppage time.

Cameron Carter-Vickers’s Luton Town picked up a 1-0 shutout at Middlesbrough. Ryan Tunnicliffe scored in the 17th minute. Lynden Gooch subbed out in the 59th minute for Sunderland’s 1-0 win at Oxford in League One. A 3rd minute own-goal was the difference.

In the Bundesliga, Timmy Chandler’s Eintracht lost 4-0 at Borussia Dortmund, giving up goals in the 33rd, 49th, 54th, and 74th minutes. Alfredo Morales’s Fortuna Dusseldorf lost 4-1 at home to Glabach. Jonas Hofmann put Gladbach up in the 22nd with Fortuna’s Erik Thommy equalizing in the 29th. Lars Stindl put the game away for Gladbach with goals in the 51st and 82nd minutes. Florian Neuhaus scored in the 82nd.

John Brooks’s Wolfsburg won 3-2 at Hoffenheim. Wout Weghorst had a hat-trick converting penalties in the 18th and 52nd and scoring again in the 71st. Hoffenheim scored in the 45th and converted a 60th minute penalty. Josh Sargent subbed on in the 65th for Werder Bremen’s 3-0 loss at RB Leipzig. Lukas Klostermann put Leipzig up in the 17th minute with Patrik Schick scoring in the 39th. Nordi Mukiele made it 3-0 Leipzig in the 46th minute. Weston McKennie’s Schalke drew 0-0 at Mainz.

Sergino Dest’s Ajax shutout RCK Waalwijk 3-0 at home. Dusan Tadic converted a 13th minute penalty with Lassina Traore doubling the lead in the 52nd. Klaas-Jan Huntelaar scored in the 90th minute. Erik Palmer-Brown’s Austria Vienna drew 2-2 at Altach. Trailing from goals in the 11th and 20th minutes, Dominick Fitz scored in the 43rd with Christoph Monschein equalizing in the 59th. Tyler Boyd subbed on in the 75th minute for Besiktas in their 1-0 loss at Basaksehir. Romain Gall subbed on in the 59th minute and scored Malmo’s sixth goal in the 67th, shutting out Syrianska 8-0 at home in the Svenska Cupen.

Ventura Alvarado’s Necaxa lost 3-2 at Queretaro in Liga MX. Down 2-0 from goals in the 3rd and 18th, Daniel Lopez scored for Necaxa in the 44th. Queretaro made it 3-1 in the 46th with Maxi Salas converting a penalty in the 82nd. A league down, Rubio Rubin subbed out in the 71st minute for Dorados’s 1-1 home draw with Cimarrones de Sonora. Trailing from the 3rd minute, Pablo Jaquez equalized in the 21st.