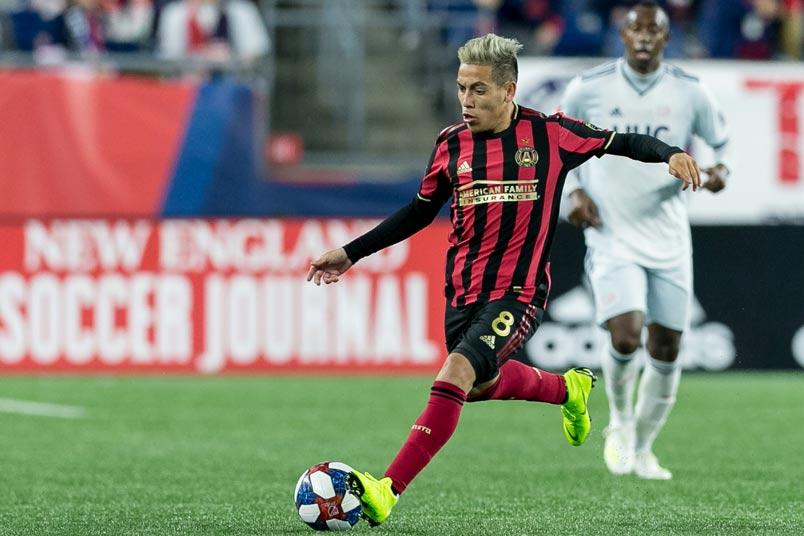 By Jason Davis – WASHINGTON, DC (Feb 14, 2020) US Soccer Players – Major League Soccer is a young league with younger ambition. While the rest of the world spent the last three decades engaged in the wild, sometimes sordid, and often thrilling business of high profile player transfers, MLS focused on simply making itself viable. You’d be fine with one hand to count the number of noteworthy MLS transfer sagas over its 25 years. The bulk of that small number happened after the league adopted the Designated Player rule.

A good transfer saga rarely involves players who are out of contract and out of options. In-demand players get the most attention. The league’s modus operandi for much of its history was to sign players without a transfer fee. For the most part, no transfer fee equaled no drama.

Outside of a few unique circumstances, Major League Soccer also lacked the prestige to engage in the full back-and-forth of a good transfer saga. The uptick in spending, particularly on players looking to use MLS as a launching pad to Europe, pushed the level high enough for the league to become a destination for a certain caliber of player.

Before the latest wave, American internationals were the only names that could generate real heat in the news cycle. Sounders fans will fondly recall the brief, yet intense drama that preceded Clint Dempsey’s return to MLS back in 2013.

Dempsey’s move from Tottenham to MLS for a $9 million fee that the league subsidized came complete with flight tracking as giddy fans in the Pacific Northwest trawled the internet for signs that the deal was going down. There’s wasn’t much back-and-forth, the kind of will-he or won’t-he public haggling that marks the most contentious transfer sagas, but Dempsey was a big enough star to make it a fascinating story.

The modern era brought us the hashtagged sagas of Alejandro “Kaku” Gamarra (#KakuWatch) and Ezequiel Barco (#BarcoWatch). The former was a straightforward deal between the New York Red Bulls and Hurarcan of Argentina that hit unforeseen obstacles along the way. Following some exasperation on all sides, Kaku eventually arrived in New Jersey. Transfer saga over.

Barco’s move coincided with Kaku’s following the 2017 MLS season. Kaku’s move was a big deal. The Red Bulls paid $6.5 million for him. Barco’s winding transfer story overshadowed that move because of his age and the then-league-record fee Atlanta United paid to get him. Barco won a Copa Sudamericana with Independiente and ranked among the most hyped teenage players in the world. Those factors complicated Atlanta’s chase for him, since MLS lacked a strong reputation as a developer of talent.

At the time Atlanta moved for Barco, Miguel Almiron was still in the squad. The pathway to Europe was unclear. The move represented uncharted territory for MLS teams.

Aided by Tata Martino’s presence in Atlanta, United finally landed Barco after months of speculation, back-and-forth, and the usual public bargaining. At one point in the saga, Independiente’s president laid down a gauntlet by declaring that Barco wouldn’t leave for less than $20 million. Atlanta reportedly responded by digging in at $12 million. In the end, the two clubs negotiated a compromise of $15 million. That’s how quickly changed for MLS.

There’s only one candidate for THE transfer saga of this offseason. Inter Miami’s chase of Rodolfo Pizarro has taken more turns than a Formula One racecourse. Over mere weeks, the deal was on, off, then on again, then off, then finally on for good. Pizarro landed in Miami on Wednesday. Though the club has yet to issue an official confirmation, his presence is enough to indicate a done deal.

If Pizarro and his transfer saga are different from Kaku or Barco, it’s in degree, not kind. Pizarro arrives in MLS at age 25 but will be 26 by the end of this weekend. He’s not the young, unproven talent that Barco was. He’s closer to Kaku in profile, though his price tag and the hand-wringing over his move to MLS set him apart.

That hand-wringing was one of the more excruciating parts of the negotiations between Monterrey and Inter Miami. The Liga MX club seemed initially reluctant to send Pizarro to MLS, whether because of contempt or ambition. Reports out of Mexico stated that Pizarro’s release clause, a clause Los Rayados demanded Inter Miami meet, was substantially different for clubs in Europe than for clubs elsewhere in the world.

Pizarro’s European dreams complicated the picture. Even if Monterrey demanded that any MLS club interested in Pizarro pay a premium for him and a club was willing, it wasn’t clear of the player himself viewed a move to the United States as a positive step for his career.

What marked the Pizarro-to-Miami saga and set it apart from even the protracted processes for Kaku and Barco was the sheer intensity of the coverage. Not a day passed during the negotiations without another story hitting the news in Mexico or the US reporting on the ordeal. At one point, the move was off because Inter Miami hadn’t paid the agreed-upon fee. As if the new MLS club ordered a fancy takeout dinner at a high-end restaurant, then refused to pay when the meal arrived.

The morphing relationship between MLS and the Mexican league is a factor in the overage. Liga MX’s dominance over MLS and the question of whether Mexican internationals like Pizarro should play in a competition deemed inferior by most pundits in the country looms large in the story. The fee itself, impacted by the release clause, swung wildly.

Numbers as high as $20 million and as low as $9 million hit the news. The final number is reportedly around $12 million. That’s not a record, but still one of the highest fees ever paid for an incoming player to MLS. Monterrey got a premium from Inter Miami, but it wasn’t the exorbitant fee the club initially claimed it would take to get their star playmaker.

Pizarro’s desires decided the outcome. The midfielder told the media in Miami that David Beckham’s call helped convince him to make a move. Pizarro talked about making history in Florida, something he can do as the biggest star in the inaugural roster for the expansion team. The wave of Mexican players making their way north paved his path.

It’s the player that ultimately resolves most transfer sagas. The money matters, but if the player wants to go, the clubs will find a way to make it happen. That’s good news for MLS. All signs point to more players being willing to play in the league. With a little back-and-forth, more of these transfers will happen. More money means more drama.