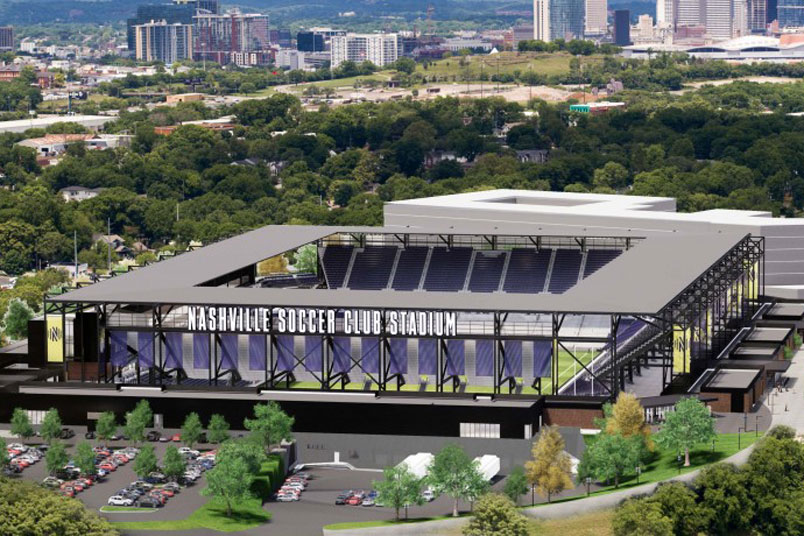 Friday's soccer news starts with the swift conclusion for what could've overshadowed Nashville SC's MLS debut. The expansion team's stadium plan will go ahead almost as planned. Nashville SC has accepted mayor John Cooper's administration wanting a change in the footprint of the venue and private funding for construction. The negotiations over those changes came to a head in recent weeks, with the potential that Nashville SC would end up looking for a new site.

“I’m so glad we’ve reached a better deal for Nashville. I’m grateful to Nashville Soccer Holdings and John Ingram for understanding our city’s financial realities and agreeing to pay up to $54 million in additional costs,” Mayor Cooper said in a press statement. “This deal saves the taxpayers money and provides a better site plan for the Fairgrounds. Today is an exciting step forward for sports in Nashville, and I’m ready for the first Nashville SC game on February 29.”

For Nashville SC, what turned into an expensive preseason distraction returns them to what will happen on the field. The city's NFL stadium was always going to be their home amid reports that selling ticket plans at the 69,143 hasn't been easy. How much ticket scarcity will mean for the new market will wait until their soccer-specific stadium opens at some point in 2022. We've seen this before in MLS, most recently with Minnesota United. A team starts in a big venue before moving to its purpose-built stadium. That multi-launch scenario allows them to restart. It also provides a convenient reason for waiting on making the kind of designated player moves that define competitive MLS teams.

Nashville is in the process of showing what kind of expansion team they want to be. Right now, they've made two veteran moves bringing in Dax McCarty and Walker Zimmerman. The Zimmerman trade cost them a significant amount of allocation money, but it's worth asking if they had any intention of using that allocation money to sign another designated player.

Hany Mukhtar joined Nashville from Brodby in a DP deal agreed last summer. The midfielder is a proven scoring talent in the Danish Superliga, but how that translates with an MLS expansion team is the question. Nashville's forward pool has three MLS players combining for 10 goals last season. Joining them are two from the USL version of Nashville SC and a third round SuperDraft pick. That's the obvious issue for Nashville on paper, the old question where the goals will come from. It's a lot of pressure on an attack that may have quality component parts but lacks a standout player to score the goals.

If Nashville is relying on a group effort, they could be asking a lot of a mixed group of players in a new surrounding. We know how competitive MLS teams normally build, and the key is a good goalkeeper and a known scoring threat. Both require opponents to make changes. MLS teams can get away with questionable defenses and still succeed. They can't expect to hold teams to low scoring games and come away with enough points to matter. That's a recipe for multiple losing streaks and waiting for the playoff scenario to catch up with a team.

Nashville can change that the same way they changed the mayor's mind about their stadium plan. It takes spending money and doing it right now.

The Tennessean's Davis Plazas looks at what was at stake for the city with Nashville SC's stadium plan. SI.com's Brian Straus on MLS stepping in to make sure Nashville's stadium plan goes ahead. The Washington Post's Steven Goff reports that a Barcelona vs Real Madrid friendly might open the new NFL stadium in Las Vegas this summer. SBI Soccer's Franco Panizowith Red Bulls coach Chirs Armas talking about the upcoming season. Pro Soccer USA's Caitlin Murray reports on Chicharito Hernandez and the Galaxy.

The Independent's Miguel Delaney picks up on his concerns for the state of soccer. The Athletic's Raphael Honigstein works through Jurgen Klinsmann's brief time as coach of Hertha BSC. AFP reports on what's happening with the Chinese Super League clubs.

⭐️ GOAL OF THE MONTH ⭐️@LyndenGooch has picked up January's @SkyBetLeagueOne GOTM award for THAT strike at @MKDonsFC.