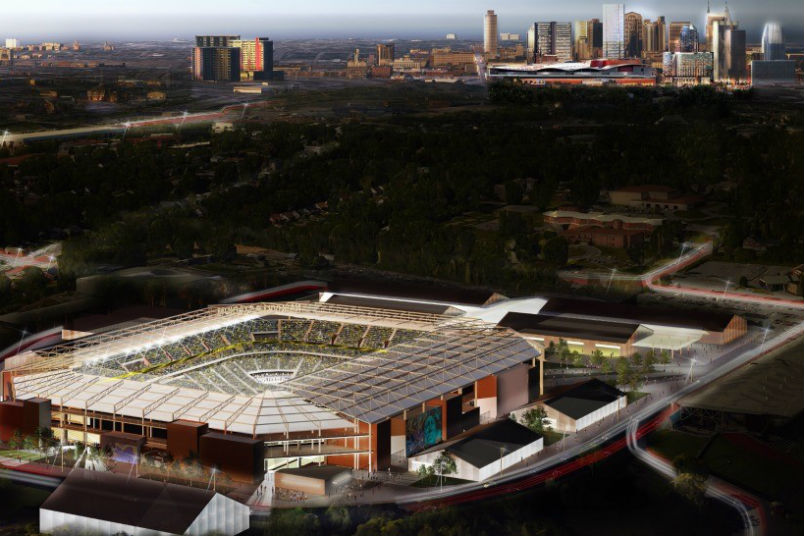 By Jason Davis – WASHINGTON, DC (Feb 7, 2020) US Soccer Players – Nothing about Nashville’s entry into Major League Soccer has been straightforward. Though MLS earned the benefit of the doubt with its expansion choices after a string of wildly successful new clubs, the choice of the Tennessee capital for the league’s 26th team always seemed oddly taken.

The city didn’t have a massively popular lower-division team. No significant grassroots movement to bring MLS to the city predated the league’s interest. The typical metrics that drive expansion chatter weren’t better in Nashville than in several other candidate cities. Outside of an obvious opportunity to set Nashville up as a geographic rival to Atlanta United and a notable history as a site of national team games, the argument for expansion to Nashville was unclear at best.

What Nashville does have is the type of growing, diverse, and dynamic market that MLS covets. It also had a stadium plan. The bid led by the Ingram Family included constructing a purpose-built stadium at the Tennessee state fairgrounds a few miles south of the city’s downtown district.

As of now, that plan is in ruins. What once was a sure thing has turned into a disaster for MLS and Nashville SC. Blame is difficult to parcel out when complicated private/public partnerships collapse, but the central figure in the new Music City melodrama is Nashville Metro mayor John Cooper.

The series of agreements that provided for the public portion of the stadium’s construction costs predate Cooper’s election as mayor. Though he’s legally bound to move forward with the project, Cooper believes that the likely cost overruns and the failure of the deal to account for an auto raceway on the fairgrounds necessitate his refusal to authorize demolition of existing buildings that must happen before stadium construction can begin. Needless to say, MLS and Nashville SC aren’t happy about Cooper’s intransigence.

In a joint statement issued last week, MLS and the Nashville ownership pointed to “broad support” in the city for the stadium plan. They referenced enthusiasm for both the new expansion team and the city’s bid to host games during the 2026 World Cup. It also asked why Cooper isn’t moving forward with the deal already in place.

It also related MLS commissioner Don Garber’s message to Cooper that MLS would not have awarded Nashville an expansion team “without the commitment made by the city to build a soccer stadium at the Fairgrounds”. The statement was a not-so-subtle attempt by the league and the club to exert pressure on a politician they believe has no standing to go back on the deal while also declaring an intention to continue negotiations with the mayor’s office over the club’s portion of the stadium project financing.

Those negotiations were supposed to take place over “the next week” according to the statement. As of Thursday, February 6, that week is up. On the table from John Ingram and Nashville SC is an increase in their commitment that the club portrays as $54 million in total. That number includes $19 million in contributions to the infrastructure costs that’s one of Cooper’s chief concerns and $35 million that the city would have to pay if the club didn’t mean ticket and concession sales targets. The offer is not a flat $54 million. It doesn’t address the cost overruns Cooper identified as the biggest problem with the current deal.

Cooper is not budging. Adding to Major League Soccer’s problems, a lawsuit challenging the stadium plans on different grounds was cleared for trial by a judge. That suit claims the stadium project violates the Metro charter, which dictates that space for the Tennessee State Fair and a flea market be reserved.

Barring a last-minute breakthrough, the second week of February will arrive without a resolution and demolition underway. That will only further delay a project that was supposed to start in November of 2019.

Frustration in the halls of MLS headquarters and the offices of Nashville SC is mirrored by soccer fans in the region. It’s difficult to blame MLS when everything about the deal looked to be signed and sealed. Accounting for a different mayor isn’t normally part of the stadium planning process.

If Nashville SC looked like a surefire success going into their first season, the stadium delays might not be so worrying. Between an initial delay that pushed the planned opening of the stadium to 2022, soccer fans in the area were already dealing with disappointment. The latest developments could depress interest in the team just as its first season is about to get underway.

Reports of season ticket sales hovering around 5,000 don’t inspire the belief that Nashville SC can fill the NFL building that may now serve as its home venue for more than the two-plus seasons initially planned. The club announced on Thursday that it will open up the 300 level of Nissan Stadium for the home opener on February 29 versus Atlanta United due to demand. That means more than 30,000 tickets so far.

It’s an impressive number on its face. However, pairing it with the reports of underwhelming season ticket sales and the fact that the opponent in the well-supported and nearby Atlanta United, it doesn’t appear to be an obvious indicator of future attendance. Playing in an NFL venue doesn’t have to be negative. Atlanta is proof of that. Still, anything less than the 30,000 the club expects in their curtain-raiser will look paltry in a building too big for all but a handful of MLS teams.

MLS is learning a difficult lesson about just how far soccer’s new popularity goes. If Nashville was supposed to be another Atlanta-style MLS success story, the calculation is proving at least slightly off. Politicians throwing wrenches in stadium plans is one thing. Lagging ticket sales are more troubling.

Nashville SC hasn’t played a game. Every conclusion drawn about what the club will and won’t be, on the field and in the stands, is premature. The club might shock everyone with massive crowds. That success might force Cooper to find a quick solution to his concerns over the Fairgrounds site. For the moment, three weeks from the club’s first-ever game, it’s hard to be bullish on the future of Major League Soccer in the Music City.