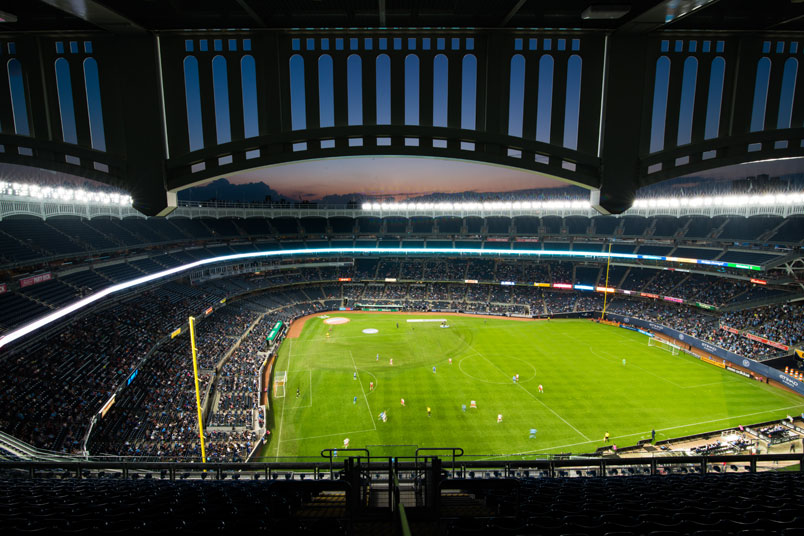 Monday’s soccer news starts with The news that NYCFC might be close to announcing a stadium site. The NY Times’ David Waldstein reported on Friday that the MLS club might have a site just south of Yankee Stadium. As the report indicates, there’s no deal yet but negotiations appear to be progressing. The news breaks at an interesting time for the club, with NYCFC playing the home leg of its Concacaf Champions League round of 16 series at Red Bull Arena.

Needing alternative venues came to a head last Fall. The Eastern Conference champions had to move their playoff game to Citi Field with the Yankees needing their stadium for the postseason. That NYCFC lost that game compounded the problems with being the secondary tenant in the Bronx. This season, NYCFC moved weeknight games to the weekend by once again using Citi Field. They’ve also had issues scheduling US Open Cup games.

There’s no downplaying the unique situation for NYCFC. With New York real estate at a premium, finding space for a soccer-specific stadium was never easy. The number of proposals and potential sites died down over the years with NYCFC seemingly stuck where they started. With the Yankees as a minority investor in the club holding 20% as Yankee Global Enterprises, this isn’t a traditional stadium rental.

Still, the Yankees need to look after themselves first. The field dimensions for soccer are tight, an understatement when watching NYCFC home games. Combine that with the availability issue, and Yankee Stadium turns into a constraint. It’s a necessary one considering the situation. The only major stadiums within the five boroughs are for baseball, and now NYCFC is using both of them.

It’s a scenario that still has them going across the river to New Jersey later this month against San Carlos in the Champions League. Should NYCFC advance, they’ll need Yankee Stadium available between March 10-12 or it’s another alternative venue.

Should the latest plan for a soccer stadium go through, NYCFC’s situation wouldn’t change for several years. Again, this is New York City. The idea that they could get something together on an expedited timescale is unreasonable. NYCFC has always stressed that they would eventually build in the five boroughs. Short of moving to Staten Island, that creates a noticeable land availability issue. City Football Group and MLS had to know that going in, though it’s doubtful that anybody involved in the club thought it would take so long just to get a site.

Here’s the thing about pro soccer in the biggest city in the country. Once they get a stadium under construction, it doesn’t change what the club has had to go through just to feel at home. It’s a safe assumption, however, that it will make that worth it.

The Athletic’s Raphael Honigstein counts RB Leipzig as contenders after drawing with Bayern Munich. The Daily Mail’s Amital Winehouse and Alvise Cagnazzo asks about Juventus with the pressure mounting after a loss to Hellas Verona. The Independent’s Jack Rathborn on what the Premier League could make from its broadcast rights. The Guardian’s Oliver Wainwright reports on Chelsea’s stadium renderings with the club looking to replace Stamford Bridge with a larger facility. AP’s Rob Harris on the forensic accounting that shows the level of financial issues at CAF.