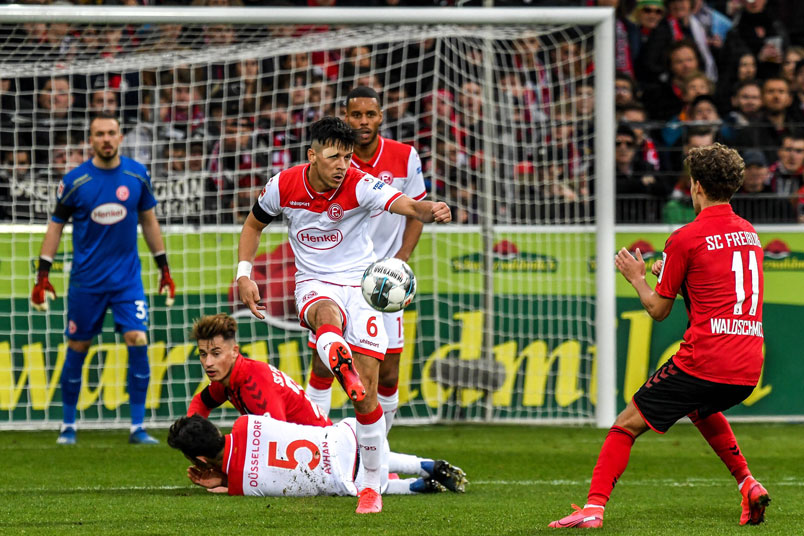 The roundup of USMNT players in Europe and Mexico starts in the Bundesliga. Alfredo Morales subbed out in the 67th minute for Fortuna Dusseldorf in their 2-0 win at Freiburg. Andre Hoffmann scored in the 37th minute with Erik Thommy doubling the lead in the 61st. The result has Fortuna 16th in the table holding the relegation playoff place two points and -2 in goal differential from safety.

“It may not have been the most beautiful performance from us in terms of play, but it doesn’t matter if you take three points with you,” Fortuna’s Rouwen Hennings said. We were tough to play against, tied up a lot of balls, took our free kicks, and constantly interrupted Freiburg’s rhythm. We did a clever job and are now going home with three points.”

Weston McKennie subbed out in the 55th minute for Schalke’s 5-0 home loss to RB Leipzig. Marcel Sabitzer put Leipzig up in the 1st minute. Timo Werner doubled the lead in the 61st with Marcel Halstenberg scoring in the 67th. Angelino made it 4-0 with Emil Fosberg scoring in the 89th.

John Brooks’s Wolfsburg shutout Mainz 4-0 at home. Josip Brekalo scored in the 21st with Renato Steffen making it 2-0 in the 45th minute. Yannick Gerhardt added a goal in the 49th with Steffen scoring again in the 68th. Josh Sargent subbed on in the 83rd minute for Werder Bremen in their 2-0 home loss to Borussia Dortmund. Werder Bremen gave up goals in the 52nd and 66th minutes.

Terrence Boyd’s Hallescher lost 5-3 at home to Unterhaching in the 3.Liga. Trailing 2-0 from goals in the 2nd and 14th, an Unterhaching own-goal made it 2-1 in the 38th minute. Hallescher was down 3-1 in the 58th, with Bently Bahn pulling a goal back in the 72nd. Hallescher gave up a fourth goal in the 82nd with Jonas Niefeld scoring in the 89th. Unterhaching scored again two minutes into stoppage time.

Geoff Cameron’s QPR drew 0-0 at Nottingham Forest in the Championship. Tim Ream’s Fulham drew 1-1 at Derby County. Wayne Rooney converted a 55th minute penalty for Derby with Aleksandar Mitrovic equalizing in the 71st. Cameron Carter-Vickers’sLuton Town lost 3-1 at Charlton Athletic. Down a goal from the 34th minute, Harry Cornick equalized in the 36th. Charlton converted a 61st minute penalty and scored again in the 87th.

Lynden Gooch scored for Sunderland in their 3-0 home won over Bristol Rovers in League One. Sunderland went a man up in the 59th with Gooch scoring in the 71st. Charlie Wyke added a goal in the 73rd with Luke O’Nien scoring in the 82nd minute. Gooch saw yellow in the 31st minute, subbing out in the 81st. Matthew Olosunde’s Rotherham United won 2-1 at Accrington Stanley. Freddie Ladapo scored for Rotherham in the 64th with Accrington Stanley equalizing in the 65th. Ben Wiles won the game a minute into stoppage time.

Erik Palmer-Brown scored in Austria Vienna’s 2-2 draw with Red Bull Salzburg. Falling behind in the 7th minute, Christoph Monschein equalized in the 67th. Red Bull scored again in the 70th with Palmer-Brown leveling the score in the 89th minute. Andrija Novakovich scored in Frosinone’s 2-0 win at Cosenza in Serie B. Federico Dionisi made it 1-0 Frosinone in the 14th with Novakovich doubling the lead in the 20th minute.

Sergino Dest’s Ajax lost 1-0 at Heracles. The game’s only goal came in the 77th minute. Tyler Boyd subbed on in the 78th minute for Besiktas in their 2-2 home draw with Trabzonspor. Falling behind in the 5th minute, Kevin-Prince Boateng equalized in the 57th. Domagoj Vida scored Besiktas’s winner in the 64th. Shaq Moore’s Tenerife shutout Elche 1-0 at home in Spain’s second division. Daniel Alcon scored in the 13th minute. On Monday, Aron Johannsson scored twice in Hammarby’s 5-1 home win over Varbergs Bois in the Svenska Cupen. Johannsson opened the scoring in the 19th and scored Hammarby’s fourth goal in the 58th minute.