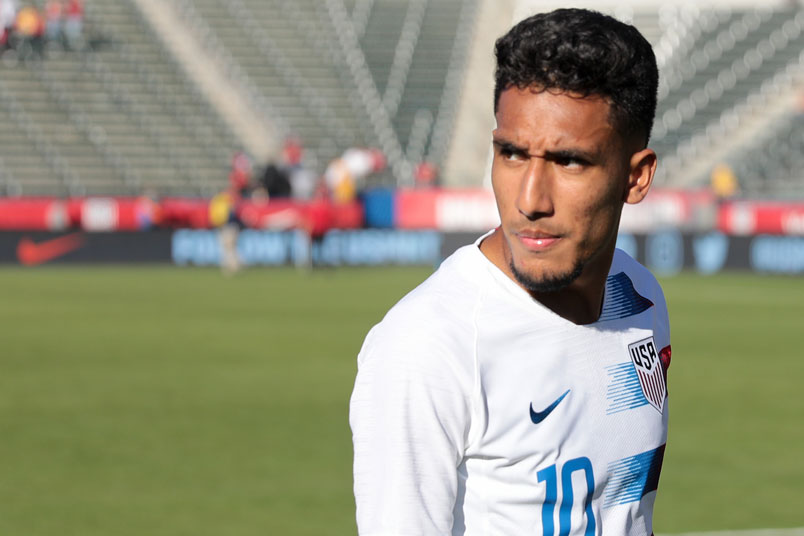 By Jason Davis – WASHINGTON, DC (Feb 5, 2020) US Soccer Players – No team had more players in the USMNT January camp than FC Dallas. Head coach Gregg Berhalter brought in a group of young players for two reasons. First was the standard audition for new talent. Second, to better prepare a group of U-23 players for the Concacaf Olympic qualifying tournament in March. Berhalter made a point of prioritizing the Olympics amidst a full program overhaul. U-23 coach was on hand for all of the January proceedings.

“I think it’s going to be very challenging to get players like Christian Pulisic and Weston McKennie released for qualifying because it falls outside the current FIFA window,” Berhalter told SiriusXMFC last week. “But players who have been mainstays for the US national team like Jackson Yueill and Reggie Cannon, we’re going to want them to go through that qualifying process and help the team qualify.

It’s not just Cannon from FC Dallas. Every one of the players called in from Dallas is age-eligible for the Olympic group: midfielders Paxton Pomykal and Brandon Servania, forward Jesus Ferreira, and fullback Cannon. Pomykal pulled out of the January camp due to an injury, but Servania, Ferreira, and Cannon all played in the camp-closing friendly victory over Costa Rica on Saturday night.

Servania and Ferreira made their USMNT debuts in the 1-0 win. Those first caps might presage bright futures in the senior national team in the long term. There’s no doubt that they set the stage for their involvement in the Olympic qualifying squad that will travel to Guadalajara, Mexico in March. Servania and Ferreria figure to be central to the squad that Kreis rolls out in an attempt to return to the Olympic tournament for the first time since 2008.

Kreis, like all the coaches before him, will rely heavily on MLS players for the Olympic tournament. Underage events are not part of the FIFA calendar and are therefore not subject to international release requirements. Kries will need the support of the domestic league to build his squad, though the process promises more complicated this time around.

Name like Christian Pulisic, Tyler Adams, Weston McKennie, Josh Sargent, Timothy Weah, and Sergino Dest are all age-eligible. All won’t be making their way to Mexico.

Already, MLS teams are pushing back against the idea that their players will always be available to US Soccer when the national team programs come calling. Conspicuous among the names missing from Berhalter’s January camp roster were a few Atlanta United players. The club reportedly declined to release as it prepares to open the new season with Concacaf Champions League matches this month.

Kreis and Berhalter are keenly aware of the changing dynamic heading into 2020. Ahead of the camp’s climax against Costa Rica where the USMNT starters had an average age of just over 23, Berhalter acknowledged the help needed.

“We’re going to need a lot of cooperation from Major League Soccer, and I know that’s difficult given the early stage of their season,” he said.

The timing of the Olympic tournament is a new wrinkle. Concacaf held the qualifying tournament for the 2016 Olympics in October of 2015, putting a different kind of pressure on clubs who were fighting down to the wire for playoff positioning. Whether this version is more difficult to deal with than the previous one is a matter of opinion. It’s clear that now MLS teams feel more emboldened to hold onto their players.

There’s no such concern with FC Dallas’s young group. With FC Dallas not in the Champions League, the club didn’t deem it necessary to reject calls for its quartet of players for the January camp a la Atlanta. Dallas is unlikely to turn down calls for any of its players either in March, or, should the United States qualify for Tokyo, for the Olympic soccer tournament proper.

Letting its players go to participate in those tournaments might impact a promising campaign for the club. It’s certainly worth asking if FC Dallas might consider rejecting Kreis’s requests either at the start of the season or midway when a decent summer could help the young team push into the upper echelon of the Western Conference.

FC Dallas was no also-ran in 2019, just a young team trying to play its way to respectability. Head coach Luchi Gonzalez led them to the playoffs, where FC Dallas nearly sprung a remarkable upset against the eventual MLS Cup winner, Seattle. There are expectations at Toyota Stadium this season. The core group of academy-bred names adds Thomas Roberts, Edwin Cerillo, Ricardo Pepi, Bryan Reynolds, and 24-year-old goalkeeper Jesse Gonzalez. They’re all a year wiser and better prepared to take on the league’s elite.

As Gonzalez is committed to turning FC Dallas into an MLS Cup champion, he’s also committed to sending players to the USMNT. A product of the American soccer system himself and a former director of FC Dallas’s vaunted academy, Gonzalez has spoken repeatedly about his desire to see his club heavily represented in the national team.

Gonazlez wants FC Dallas to be to the USMNT what Barcelona once was to the famed Spanish national teams of ten years ago. Being that central to the program means giving up players that will be central to the club’s MLS efforts. Berhalter is a system coach, needing as much time as possible with his squad.

How that works for FC Dallas is the question. It’s undoubtedly a compliment to the club that their players could end up necessary to the USMNT’s immediate future. It’s a problem if that means losing them for MLS games due to Olympic commitments.

The days of MLS teams acquiescing to US Soccer without question are coming to an end. The bigger MLS gets, the more pressure there is on clubs to win above all else. The league’s shift towards young stars makes them more important than ever to the quest for championships. It gives clubs little reason to let them go off for extended stretches while league play continues.

At least, for now, FC Dallas won’t be responding to those pressures. The league’s foremost producer of young talent takes pride that so many of its academy graduates are worthy of national team exposure. The Olympics present a problem, but the club stays committed. That’s good news for Kreis and for the chances of the United States to return to the men’s Olympic soccer tournament after a long 12-year absence.