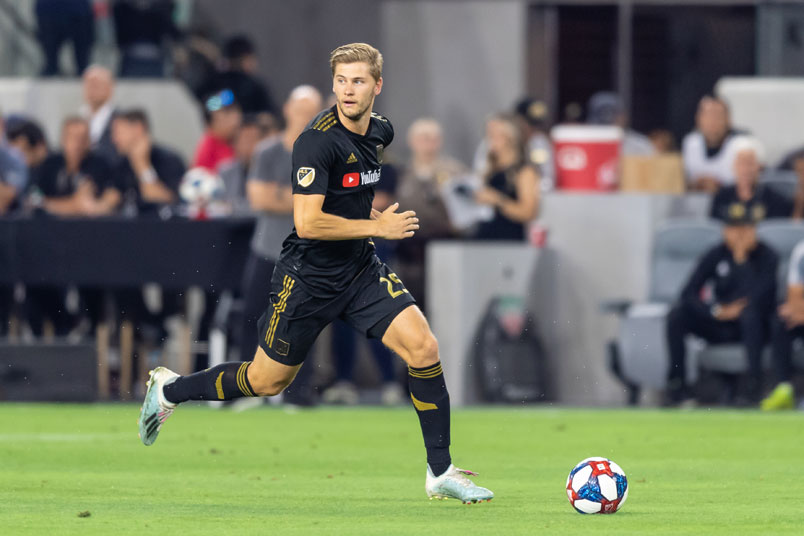 By Jason Davis – WASHINGTON, DC (Feb 12, 2020) US Soccer Players – The MLS season is mere weeks away, and the teams participating in the Concacaf Champions League are gearing up for games that come earlier than that. In a perfect world, coaches would have set rosters and know what they’re working with for games that count. Then again, this is MLS. The primary in-season transfer window doesn’t close until May 5. That’s plenty of time for rosters to remain in flux.

Two clubs entering the Champions League this month got an early start, with deals leaking to the media prior to any official announcement. Both said goodbye to crucial figures who were central to their success in recent seasons. One departure came as a surprise. The other was more expected.

LAFC is not standing pat based on what it did in 2019. The regular season points record fell, and things are changing prior to defending the Supporters’ Shield. LAFC coach Bob Bradley built a juggernaut in the regular season, racking up MLS record 72 points and ending the schedule with a +48 goal differential.

It was easy to get lost in the brilliance of the LAFC attack, led as it was by MVP Carlo Vela and his record 32 goals. However, LAFC’s dominance was as much about its ability to shut down opponents. Bradley’s defenders did their job, particularly because of his demand that defenders be good on the ball. That fed into the club’s overall approach and deserved plenty of plaudits.

Walker Zimmerman manned the center of LAFC’s back line 51 times over the club’s first two seasons. Alongside Vela and a handful of others, Zimmerman was part of the team’s inaugural foundation. He’s a trustworthy, heady defender who rose in prominence both in Los Angeles and with the US National Team. In 2019, Zimmerman finished second to Ike Opara for the Defender of the Year Award and earned a place on the league’s Best XI.

For those reasons, no one expected LAFC to send Zimmerman to Nashville SC for a haul of allocation money that could rise as high as $1.25 million, the shocking move the club announced Tuesday. The timing of the trade puts pressure on the club to find a replacement with Club Leon on the schedule next Tuesday in the Champions League.

According to LAFC general manager John Thorrington, the club did not intend to trade Zimmerman. Nashville’s offer forced LAFC’s hand.

“It wasn’t necessarily in our plans, but we always have to evaluate these things,” Thorrington said. “We feel like we have players here who will be given more opportunities, as Walker started the majority of our games. Then you have to look at what options these assets open up for us. With a deal that is the biggest for a defender in our league’s history, those variables come into account and you have to talk it through.”

The nearly $1 million in guaranteed General Allocation Money spread out over two seasons the club received for Zimmerman will help LAFC bring in new talent and hold on to the group already in place. That Thorrington and LAFC saw Zimmerman as expendable also says plenty about their faith in the center backs still on the roster.

21-year old Tristan Blackmon figures to step into the spot vacated by Zimmerman alongside Eddie Segura. Blackmon started 15 games for the club last season between center and right back. He’ll likely move inside from the right back spot in Bradley’s preferred lineup. Bradley started Blackmon over Zimmerman in the Western Conference semifinal against the Galaxy last October, a decision that surprised most observers. In retrospect, it was a harbinger of Tuesday’s trade.

Zimmerman, of course, had no say in the deal that sent him to an expansion team in a city 2,000 miles away. Remember, an MLS trade is not a transfer. Under MLS’s single-entity structure, the league itself holds all International Transfer Certificates.

As important as Zimmerman was to LAFC over the last few seasons, he wasn’t the biggest name on the roster. LAFC didn’t ship out its best player on Tuesday. Montreal did.

The Impact announced that Ignacio Piatti is leaving Montreal by mutual agreement to join San Lorenzo in his native Argentina. Piatti arrived in Montreal from San Lorenzo in 2014 and returns there in large part because of personal matters.

Unlike the Zimmerman trade, Piatti’s move is not much of a surprise. South American sources on transfer rumors can sometimes be untrustworthy, but the sheer volume of stories around Piatti over the last month indicated that something was afoot. Montreal probably wouldn’t want to lose Piatti, but the player’s wishes, his age, and hefty contract made it worthwhile for the club to bid him adieu.

Piatti leaves behind an immense legacy in Montreal. The Impact has never been flashy, but Piatti’s one-man brilliance was always enough to keep them competitive in the changing MLS landscape. As a club that built a reputation for counterattacking soccer, Piatti was the central figure in that approach. He showed in big games and was a consistent thorn in the side of Montreal’s biggest rival, Toronto FC.

New head coach Thierry Henry must now prepare for a Concacaf Champions League match-up against Saprissa of Costa Rica without Piatti. Henry will drop straight into the deep end of managing in North America. He needs to rebuild his new team’s attack on the fly. 2019 signing Bojan is now the player most under the microscope.

It’s fair to say that the Impact’s chances of advancing to the quarterfinal of the Champions League just took a significant hit. The Impact did get a player from San Lorenzo, likely as part of the process of letting Piatti leave for Argentina. 22-year old midfielder Emanuel Maciel has one appearance for San Lorenzo’s senior team. He won’t be a Piatti replacement.

Both LAFC and Montreal want to do well in the Champions League, but neither is prioritizing that competition over longer-term goals. For LAFC, trading Zimmerman gives the club tools to build with as it chases the championship that eluded it last year. For Montreal, saying goodbye to a 36-year-old club legend was difficult, but necessary. The money the club will save not paying Piatti’s salary will help justify more signings. Younger players will get a chance for more responsibility.

The timing of the Champions League has always been difficult for MLS. No team is at its best in the initial stages of a season. The American and Canadian clubs run up against Mexican teams in the full stride of the Spring season.

Preseason is also when teams do business and occasionally when unexpected moves happen. LAFC and Montreal faced an uphill battle to win the Champion. Thanks to the moves they made on Tuesday, the hill just got a little steeper.