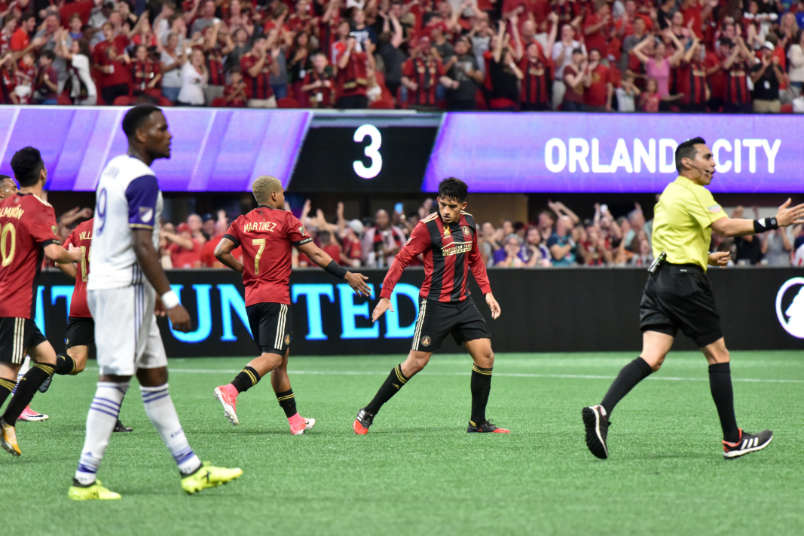 By Jason Davis – WASHINGTON, DC (Mar 13, 2020) US Soccer Players – Major League Soccer’s 2020 season didn’t give us much before the league made the tough, but crucial decision to suspend play amid the spread of the COVID-19 virus, but it did leave us on a high note. Sunday’s back-and-forth affair between LAFC and the Philadelphia Union in Los Angeles put on display the kind of high intensity, high-quality MLS thirsts for in all of its regular-season games.

The game featured a bevy of spectacular goals and put the Union on the map as a contender for silverware in 2020. Despite the young age of the campaign and before we knew what was coming, the match rightfully earned buzz as a possible game of the season. If it had to be this way, at least we’ll have a good memory to tide us over. When that fades, we’ll be left to find some other way to scratch the soccer itch.

That might mean trawling the results of season past in search of the same kind of game. One with the intensity, big stakes feel, and satisfying resolution of the match between LAFC and Philadelphia on Sunday. Even though that game ended deadlocked, no one could walk away feeling cheated.

In the spirit of a wild six-goal draw, it seems only right to choose a game with the same scoreline. Even better if that game followed a similar pattern, with a series of lead changes that ultimately delivered an appropriate resolution. Banc of California Stadium delivered the playoff-like atmosphere, so only right that the choice measures up in that regard.

How about star power? LAFC’s Carlos Vela put in another virtuosic performance for his team with a brilliant free-kick goal. Diego Rossi showed off his talents with a curling, far-post tally just when it looked like Philadelphia had taken control of the match. The Union doesn’t have the same name recognition of the defending Supporters’ Shield winners, but the goals were of excellent quality. Let’s all take a second to celebrate the 40-yard rocket scored by Union defender Jakob Glesnes. What a goal.

2017 was Atlanta’s first year in the league. They met Orlando for the third time on September 16, with the Five Stripes already a verified phenomenon. Not only was the team good in year one of its existence under Tata Martino, but the club was drawing massive crowds, first at Bobby Dodd Stadium and then at the brand new Mercedes-Benz Stadium in downtown Atlanta.

The occasion of Orlando’s second visit led United to open up all of Mercedes-Benz Stadium rather than limit the soccer crowd to the lower bowl. The choice paid dividends with an MLS standalone record 70,425 showing up for the match against a natural regional rival. Maybe the fans of Atlanta loved their club that much. Maybe they hated Orlando that much. Maybe it was both.

With more than 70,000 fans in the building, the atmosphere met the moment and then some. United was in the midst of a push for the playoffs in year one, led by Josef Martinez and Miguel Almiron, and the new faithful expected to see a triumph over the Lions.

Orlando arrived ready to deploy a new weapon. Forward Dom Dwyer joined Orlando via a blockbuster summer trade from Sporting Kansas City. The striker moved to Florida amid a months-long scoring drought and remained without a goal for his new MLS club going into the match against Atlanta.

The stage set, Atlanta and Orlando proceeded to play 90 heart-palpitating minutes. Dwyer ended his goalless run at four months, 13 days with a back-post header from a Donny Toia cross in the 10th minute. It was just the kind of start an underdog on the road in a packed house would want. A lead, before the fans were even settled in their seats. It lasted all of 26 minutes.

Josef Martinez scored to bring United level. Who else? He already had 13 goals on the season despite playing just 13 games due to injury. His goal set off a battle with Dwyer.

Orlando’s new acquisition answered with his second goal of the game, another header, three minutes after Martinez tied it. It wouldn’t be right to say it quieted the crowd, mostly because it was still celebrating the goal on the other end, but it didn’t make them happy.

The Lions took a 2-1 lead into halftime, looking eminently capable of taking all three points from the expansion club. Atlanta had different ideas, setting up a second 45 even better than the first.

Neither side made any changes at halftime. Ten minutes after the break, Martinez struck again. His headed goal from near the penalty spot was a close copy of Dwyer’s opening goal. Chris McCann’s whipped in cross kissed off Martinez’s forehead shot past Joe Bendik in Orlando’s goal, and the game was again tied 2-2.

Remember, we picked this game for a reason, because the advantage whipped between the teams as neither would back down.

Dwyer’s scoring day was done after his first two goals since his trade, but Orlando City had another talented striker in the lineup. Cyle Larin, who would leave the club after the season for Turkey thanks to a contentious transfer saga, snagged the lead back for the Lions only three minutes after Martinez’s second goal.

Larin’s, too, was a header at the back post. Whether the nature of the three Orlando goals was strategy or coincidence, the output matched the club’s best scoring day of the year. Maybe head coach Jason Kreis saw a flaw in Atlanta’s defense. Maybe the crosses were just that good.

You know the story doesn’t end there. Just as Philadelphia found it impossible to hold a lead against LAFC in its building, so too did Orlando come up short against Atlanta. Larin’s goal sparked wild sideline celebrations and again dampened the energy of the crowd, but there was plenty of time left. And Atlanta had Josef Martinez.

Martinez finished off his hat trick and returned the game an even scoreline 11 minutes after Larin’s goal. Again, it came from a cross. This time Martinez made a sharp, darting run in front of his marker to the near post and touched the ball past Bendik. Cue pyrotechnics.

The game ended 20 minutes later. The scoreline felt fair, the battle joined admirably by both teams.

While we could review what happened after the match and chronicle the fortunes of Atlanta United and Orlando City, it only diminishes that 90 minutes. Like the show put on by LAFC and Philadelphia, the last MLS game we’ll see for a while, Atlanta and Orlando’s toe-to-toe slugfest stands on its own as an incredible MLS regular-season game important not just in the standings, but because the two teams cared.

They brought the fun. Right now, that’s a nice thing to remember.