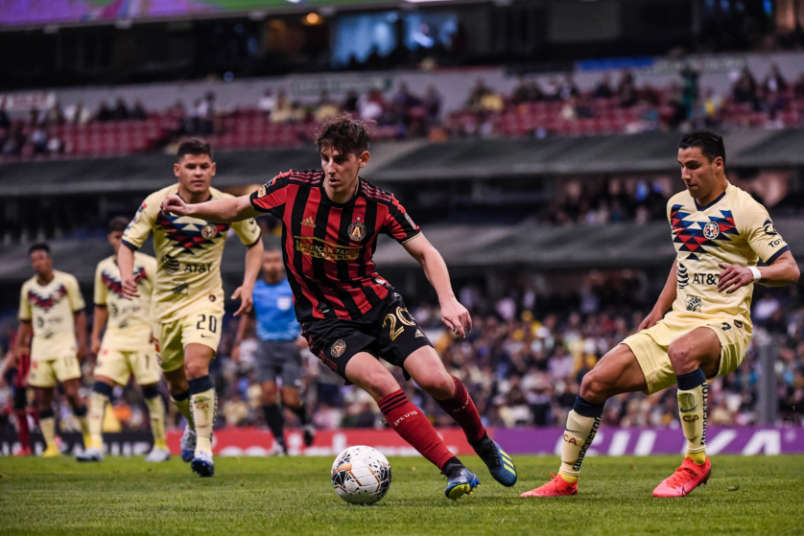 Thursday’s soccer news starts with Atlanta United’s first-leg loss at Club America in the 2020 Concacaf Champions League quarterfinals. Atlanta now trails 3-0 after a tough start in front of a sparse crowd of 20,731 at Estadio Azteca. Club America took the lead in the 11th minute, adding goals in the 13th and 36th. With Atlanta looking stronger, halftime sub Matheus Rossetto exited with an injury in the 58th minute. United hit the crossbar twice but was unable to get a goal. The series concludes in Atlanta on March 18.

“We chose for a technical concept not really the way we normally play,” Atlanta coach Frank de Boer said. “A little bit more reserved, dropping a little deeper but not too deep because of the preparation… we had like two and a half days, the trip, the altitude. So we decided to drop a little bit, play a little bit compact…. But we never got the pressure on them.”

NYCFC lost 1-0 to Tigres at Red Bull Arena in another MLS vs Liga MX matchup in the Champions League. Tigres scored in stoppage time with NYCFC having the lead on shots on goal 6 to 4. That series concludes on March 17.

“I think we did a very, very good first-half. I think we created a lot of chances,” NYCFC coach Ronny Deila said “It’s unbelievable that we didn’t score a goal…. Second-half, I think we stopped playing. They were playing too many longballs. We should’ve kept the ball more.”

Both results speak to the old MLS vs Liga MX issue in the Champions League, which at this point borders on cliche. It’s easy enough to point at a team like Club America as an outlier in North American soccer, built at a level most teams won’t try to copy. Still, MLS has stressed spending and come up with creative ways to allow its clubs to go about bringing in talent. If the end result is the same lack of competitiveness at regional level, it calls the whole project into question.

Yes, Atlanta United is without one of the most dangerous scoring threats in MLS. That doesn’t necessarily speak to the depth required to compete at regional and ultimately international level. Even the biggest spenders in MLS tend to lack the kinds of squads associated with the better teams in Mexico, much less the rest of the world.

Major League Soccer’s willingness to unlock some spending goes hand in hand with their new fondness for outgoing transfer fees. That may justify the expense of player development for some investor/operators, but it also classifies them as a selling league when it comes to emerging talent. There’s a better version of Atlanta United had they resisted the urge to sell, one that might have had the parts to overcome losing their scoring threat.

Whether or not MLS allows its teams to address that in a meaningful way requires spending. Depth has always been an issue in the league and that hasn’t fundamentally changed. The expansion era has only highlighted the difference in building for MLS and building to compete beyond Major League Soccer.

Also in the soccer scores, Fabian Johnson was on the bench for Gladbach’s 2-1 home win over Cologne. Breel Embolo scored in the 32nd minute with an own-goal doubling the Gladbach lead in the 70th. Cologne pulled a goal back in the 81st in a game played without fans.

Wigan Athletic released a statement from USMNT player Antonee Robinson explaining why he hasn’t played since a January move to Milan fell through. Robinson revealed he has an irregular heart rhythm discovered during the medial for the proposed transfer that will require surgery.

US Soccer released a statement on behalf of its president Carlos Cordeiro in response to its inexcusable legal strategy concerning the US Women players. “On behalf of U.S. Soccer, I sincerely apologize for the offense and pain caused by language in this week’s court filing, which did not reflect the values of our Federation or our tremendous admiration of our Women’s National Team,” he wrote “Our WNT players are incredibly talented and work tirelessly, as they have demonstrated time and again from their Olympic Gold medals to their World Cup titles.” SI.com’s Grant Wahl is calling for Cordeiro’s resignation.