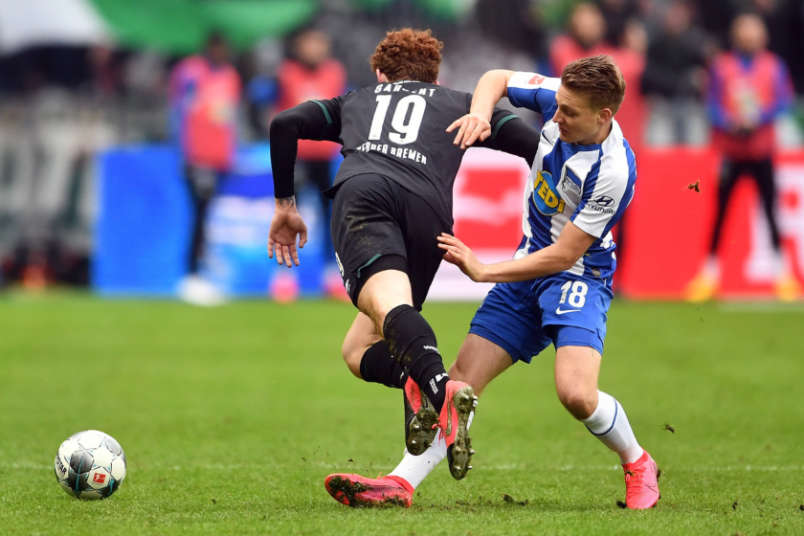 The roundup of USMNT players in Europe and Mexico starts in the Bundesliga with Josh Sargent scoring in Werder Bremen's 2-2 draw at Hertha BSC. Sargent put Werder Bremen up in the 3rd minute with Davy Klaassen doubling the lead in the 6th. Hertha scored in the 41st and 60th. Sargent subbed out in the 87th minute.

"The first 20 minutes were really good," Klaassen said. "Then we just sat back. I don't know why that happened. After that we completely lost our dominance. Overall we only really played well for a short period of the game. That's not good enough. It feels like a loss."

Weston McKennie scored in Schalke's 1-1 home draw with Hoffenheim. McKennie's goal came in the 20th minute with Hoffenheim equalizing in the 69th. Terrence Boyd subbed on in the 60th minute for Hallescher's 1-1 draw with Ingolstadt in the 3.Liga. Trailing from the 48th minute, Marcel Hilssner equalized two minutes into stoppage time.

Matt Miazga's Reading won 3-1 at Birmingham City. Trailing from the 6th minute, Miazga equalized in the 51st. Yakou Meite put Reading up in the 56th with Pele scoring in the 87th. Tim Ream subbed out in the 81st minute of Fulham's 1-1 draw at Bristol City. Down a goal in the 70th, Tom Cairney equalized in the 84th minute. Cameron Carter-Vickers's Luton Town drew 0-0 at Wigan Athletic.

Geoff Cameron saw red in the 67th minute of QPR's 3-1 win at Preston North End. PNE converted a 19th minute penalty with Grant Hall equalizing in the 61st. Ryan Manning scored in the 78th with Eberechi Eze finishing off the scoring in the 84th minute.

Tyler Boyd's Besiktas beat Ankaragucu 2-1 at home. Burak Yilmaz converted a penalty in the 6th minute with Adem Ljajic doubling the lead in the 88th. Ankaragucu scored three minutes into stoppage time. Matt Polster's Rangers won 1-0 at Ross County. Ryan Kent scored in the 77th minute. Sergino Dest's Ajax won 3-1 at Heerenveen. Dusan Tadic scored in the 57th and 60th minutes with Quincy Promes making it 3-0 in the 63rd. Heerenveen scored in the 67th. Andrija Novakovich's Frosinone lost 2-0 at home to Cremonese in Serie B. Cremonese scored in the 13th and 50th minutes with Federico Dionisi seeing red in the 53rd.

Erik Palmer-Brown's Austria Vienna drew 0-0 at home with St Polten. Aron Johannsson opened the scoring for Hammerby's 4-0 home win over Sundsvall in the Svenska Cupen. Johannsson scored in the 46th with Darijan Bojanic doubling the lead in the 56th. Alexander Kacaniklic made it 3-0 in the 73rd with Muamer Tankovic finishing off the goals in the 87th minute.