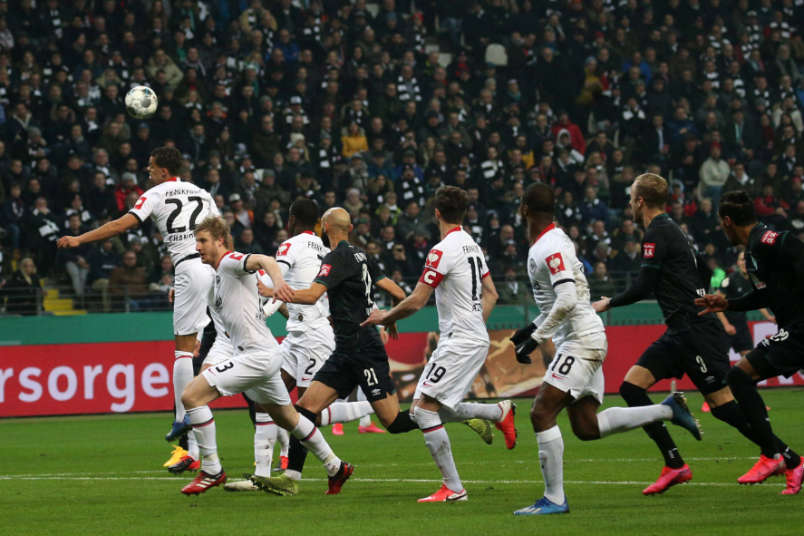 "We got straight into the game and did everything we set out to do," Chandler said "At times we had to play more directly. If you want to get to Berlin you have to beat everyone. This atmosphere lifts my heart. It's incredible that we've reached the semifinals for the third time in four years. We want to achieve the maximum in every competition.

Sergino Dest's Ajax exited the KNVB Beker at the semifinal stage with a 2-0 loss at FC Utrecht. Ajax fell behind in the 33rd and gave up a 65th minute penalty.

In the Scottish Premier League, Matt Polster wasn't in the squad for rangers in their 1-0 home loss to Hamilton Academical. The game's only goal came in the 56th minute. The league loss comes after Rangers exited the Scottish Cup on Saturday to Hearts in the quarterfinals.

"We were playing bottom of the league tonight, and we just lost to bottom of the league. So I think you know how I'm feeling." Rangers manager Steven Gerrard said. "I didn't think I could feel any worse than Hearts, but I do right now. The story of the game was that we were the better team and we created lots and lots of chances, but we didn't have the quality to take the chances. When that happens, you leave yourself edgy at the back and you also give the opposition the chance to go and snatch three points away from you."

Also in the soccer news, it's worth adding to the response to MLS commissioner Don Garber's issues with his league's schedule. Pro Soccer Talk's James Justice has Garber unhappy with the amount of off-time the league takes now that it has reigned in the playoffs. Rather than officially ending in December, the league concludes between the October and November international windows.

Not lost on anybody is that most of the league plays their last game in October and doesn't play another game that counts until late February. Pro Soccer Talk has FC Dallas investor/operator Clark Hunt talking about potentially filling that gap with a second tournament against Liga MX clubs. How that would work with Liga MX pushing toward its playoffs in November and December is certainly worth asking.

Meanwhile, there's the history of MLS and its schedule. The early reasoning for why MLS found scheduling so difficult was lack of control of venues. Eventually, soccer-specificity should've made that simpler. It didn't, with MLS almost always finding a way to keep a few teams off the field for long stretches or unnecessarily loading up on games. The simple concept of playing at home every other week seemed like an impossibility in Major League Soccer.

Here's the simple version. If the league wants a 34-game regular season, that requires 34 weeks. Add in some version of the ever-changing playoff system, and it's another four or five weeks at a minimum. The potential constraints of taking off for international breaks for the March and September windows adds four more weeks. 43 weeks, not accounting for playing league games on weeknights.

That's the problem with MLS and its calendar argument. Yes, there's a gap in the calendar as MLS constructed it. Yet it still requires players to play the same number of league games as a traditional 18-team topflight while adding on the playoffs. Adding on the Champions League, Leagues Cup, and US Open Cup already has some MLS teams playing around 40 games that count. Seattle played 39 last season. Sporting Kansas City played 41 while missing the playoffs. Atlanta United led the league with 44 games that counted. That's one less than Borussia Dortmund played last season. Liverpool played 53, PSG 55, Real Madrid 57, Ajax 58, and Barcelona rang in at 60.

Fixture congestion is an established problem in European soccer and some pushing for fewer games, that's not necessarily a target number for MLS. During his remarks at the UEFA congress, FIFA president Gianni Infantino spoke directly to that. "How many matches can a player play in a year? How many competitions do we have? How many competitions should we have? What kind of competitions do we need? Do we play too much or maybe not enough in some parts of the world?"

What MLS seems to want is a compacted schedule that exposes players to the same amount of playing time and the risk of injury that comes with it plus more. It's the more that's problematic from a player health perspective, much less trying to sell fans on multiple competitions that sort of count.

SI.com's Avi Creditor looks at the state of next season's MLS expansion teams in Austin and Charlotte. The Denver Post's Jake Shapiro has USMNT goalkeeper William Yarbrough moving from Club Leon to the Colorado Rapids. 5280's Spencer Campbell goes in-depth with what has happened with the Rapids.

The Daily Mail's Matt Hughes on rumors that UEFA wants the International Champions Cup to become a real tournament. The Athletic's Matt Slater looks at the issues with the international calendar. The Independent's Richard Jolly on the situation with Manchester City who can't win the Premier League but can win everything else.