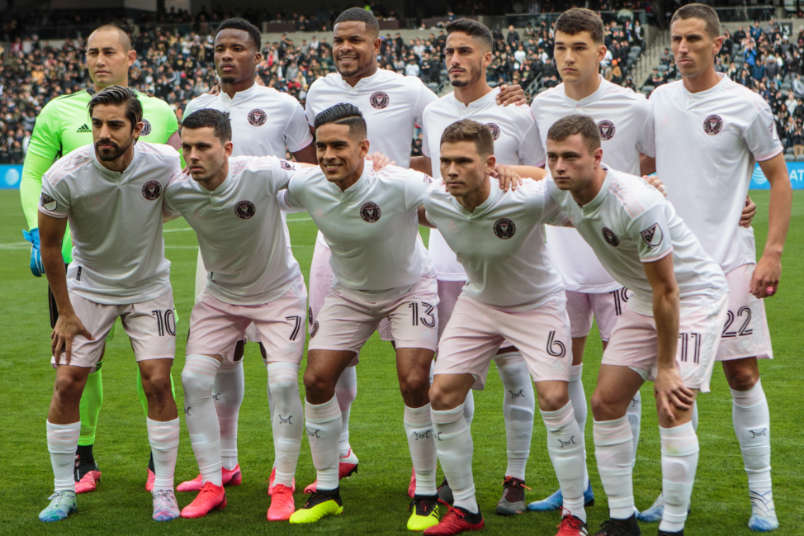 By Charles Boehm – WASHINGTON, DC (Mar 13, 2020) US Soccer Players – This week Major League Soccer made the decision to suspend its 2020 season for at least a month due to the COVID-19 outbreak. Other sports leagues at home and abroad have made similar moves to help slow the spread of the pandemic, and it’s a no-brainer given the high stakes. For MLS in particular, though, it’s a potentially costly interruption to a fledgling 25th-anniversary campaign that had just gotten underway amid high hopes and expectations. The timing of these developments is particularly unlucky for two teams.

Inter Miami’s home opener vs the LA Galaxy on Saturday would’ve marked the league’s return to South Florida after an absence of nearly two decades, dating back to the demise of the Miami Fusion and Tampa Bay Mutiny following the 2001 season. Inter’s temporary but still impressive stadium in Fort Lauderdale expected a big crowd as the expansion club finally reached another key milestone some six years after its birth.

Miami’s success story is still far from a sure thing. The ownership group led by Jorge Mas and David Beckham continues to wrangle with local politicians over their preferred permanent home, the Freedom Park site near Miami International Airport.

Their planned two-year stay 34 miles up the road in Fort Lauderdale is likely to stretch to three, perhaps longer. That makes for built-in awkwardness for a club packaged as explicitly Miamian, thanks to the hard lessons of the Fusion’s failure at Lockhart Stadium, on the very same site that Inter now occupies.

Miami’s first shot at MLS success failed in part because it was a league-owned team and easy to cut. MLS deciding to go the Florida route was an interesting choice leaving the league with no team south of DC, but Tampa and Miami ticked all the boxes for problem franchises. That included Miami’s stadium situation. Lockhart was a throwback even then, the former home of the Fort Lauderdale Strikers that looked a lot like what it was when that NASL team last used it. Inter’s return to the site is different, with the stadium gone and a new one turned 180 degrees in its place.

Inter overcame a lot just to reach this point. It’s understandable that MLS commissioner Don Garber and his investor/operators would celebrate a return of any sort to an alluring soccer market that’s eluded them for so long. The metaphors for the league’s overall growth and maturation are just too hard to resist. Pairing Beckham’s global reputation and appeal with the hefty finances of Mas and his partners may yet prove a powerful combination.

“The league was in a different spot in that time [2001],” Garber told reporters in the leadup to the season. “We didn’t have the strength and capacity and movement and energy to overcome big obstacles. “The country just wasn’t ready. Now, all of our energy is going to be focused going forward… and that speaks to the new Miami.”

Meanwhile, one week after Inter’s big occasion, the Chicago Fire was set to take the spotlight with its first home game of the year, back at Soldier Field for the first time since 2005. New owner Joe Mansueto laid out hundreds of millions of dollars to acquire the club, then extricate it from its lease at SeatGeek Stadium and return downtown in search of the success and relevance that had dried up in suburban Bridgeview.

Not lost on anybody was the rejection of suburban soccer-specificity in favor of what they’d left. The Fire could’ve stayed at the rebuilt Soldier Field, but that was not the model for success when Bridgeview became an option. Now, it’s the apparent answer.

“Bridgeview was terrific for us, but I think to take this club to the next level in terms of reaching all of Chicago we need to be located centrally,” said Mansueto in October. “I think it’s going to change the whole tenor of the club and what it means to the broader Chicago region.”

Complete with a questionable new logo and colors and a major rebuilding project on the field, the club sold more than 30,000 tickets to the home opener. Mansueto’s wealth and willpower have inspired optimism both in the Windy City and league headquarters. Garber & company are eager to see improvements from a long-running underachiever in America’s third-largest metropolitan area.

It’s said that you never get a second chance to make a first impression. The stakes probably rise even higher when it comes to high-risk, high-reward re-introductions like these. There’s no getting around the reality that the coronavirus crisis has dealt a setback to these efforts in Chicago and Miami.

Dozens of staffers at both of the clubs have been laboring for months in the buildup to these opening dates. Now they must bide their time and hope they get the chance to nail the launch in the not-too-distant future. There’s precious little precedent for anyone to refer to in this situation. MLS is a markedly different league now, changing through rampant expansion and setting higher markers for success. All involved know this, both for expansion teams like Inter Miami and reboots like the Fire.