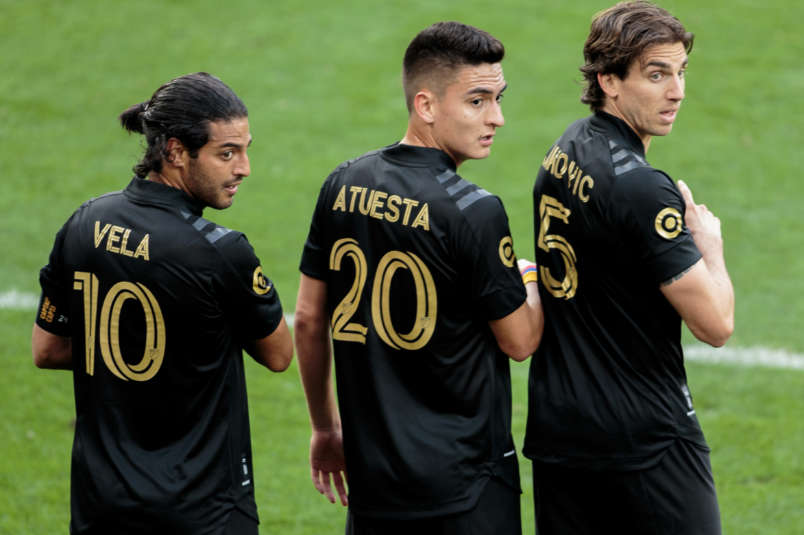 By Jason Davis – WASHINGTON, DC (Mar 11, 2020) US Soccer Players – Five Major League Soccer clubs started their seasons early in 2020 thanks to the Concacaf Champions League. The price of chasing international glory for four American teams and one Canadian team is a more urgent preseason training period and a lot more stress as the schedule begins.

Now, with the regular season underway, the complications increase. It’s not enough to be ready mentally for everything coming your way. There’s also the matter of handling the physical challenges the schedule presents. If MLS is going to climb the mountain of the Champions League in 2020, that task is paramount.

The three American teams come up against that familiar MLS foil at the quarterfinal stage of the tournament, Liga MX. Atlanta, NYCFC, and LAFC will face off against a Mexican team with a berth in the semifinals on the line. It hardly needs saying that they’ll all be fighting against difficult odds.

LAFC’s triumph over Club Leon in the last round surprised many. Despite LA’s credentials as the 2019 Supporter Shield winner and the acknowledged most talented team in the League, overcoming one of Liga MX’s best teams in the Clausura tournament was never going to be easy or simple. That LAFC overcame a 2-0 deficit from the away leg in Mexico made the achievement especially notable. Bob Bradley’s team not only found a way to win but imposed their game on an arguably better team. That felt like something new in the dynamic between MLS and the Mexican clubs. Luck did not decide the contest.

For the new dynamic to be more than a mirage, MLS teams have to back it up with success in this round. LAFC carries the most expectations, but neither Atlanta nor NYCFC will be let off the hook if they can’t stay competitive.

Bradley’s team goes from Club Leon, the third-place team in the Liga MX Clausura, to Cruz Azul, the top team in the standings. La Maquina is a scoring machine at the moment with four goals in each of its last three matches. They’re on a seven-game win streak dating back to January 17. To say the Mexican league leaders are in form would be an understatement.

LAFC will have to play near-perfect soccer to have a chance. If they don’t stake themselves to a lead in the home leg on Wednesday night at Banc of California Stadium, the series could be effectively over. The biggest problem facing Bradley and his team isn’t a lack of confidence, but the ability to play at the same intensity level that saw them through against Leon.

Bradley’s commitment to high octane soccer is admirable. No team in MLS has as defined an identity as LAFC. That identity is a key part of the club’s success. Most of the individual attention falls to Carlos Vela for good reason, but LAFC’s supporting cast doesn’t just stand around waiting for their superstar to make things happen. They have a clear idea of how to play and are adept at recovering the ball and pressuring an opponent from multiple points of attack.

Just how much will those players have to give on Thursday after Sunday’s wild 3-3 draw with the Union? The Black & Gold again showed the quality that secured the Supporters Shield on the attacking end of the field, but a game Philadelphia team pushed them to the limit.

Bradley’s substitutions indicated no intent to conserve key players for Thursday’s game. Vela played all 90 minutes, as did Rossi, Blessing, Atuesta, and winger Brian Rodriguez. Bradley is either supremely confident in his players and their unreached limits or does not see the need to look beyond the game in front of him.

“Depth” isn’t an issue if you run the same players out for every game. Depth is not a problem for Cruz Azul, a club dealing with several injuries without a slip in results.

Atlanta United is exactly where they expected to be when the draw revealed a potential clash in the quarterfinal round against Club America. A Round of 16 series with Motagua of Honduras proved a little more difficult than hoped, but the Five Stripes did enough to take care of business and meet their destiny in the form of one of the biggest clubs in the Americas.

Club America manager Miguel Herrera planted the Aguilas flag in the ground ahead of Wednesday’s first leg against Atlanta at Estadio Azteca with a memorable quote.

“They are taking on the mightiest team in America,” Herrera said of Atlanta United. “We are the biggest team, fighting with River and Boca to be the best on the continent.”

Some of that is bluster from Herrera, meant to psych out the MLS opponent before they step on the field. Herrera is known for his dramatics, but he might not direct such a statement at a team he has no worries about beating. United took down Club America in the Campeones Cup last season, a famous victory that is part of the narrative around the Champions League battle.

Atlanta’s win over America came in a one-off game in front of the home crowd at Mercedes-Benz Stadium. To have any chance of beating the Mexican giants over two legs, Frank de Boer’s team will need to survive the first leg in Mexico and make home field count back in Georgia next week. Without Josef Martinez, of course.

As encouraging as the Week 2 win over FC Cincinnati without Martinez in the lineup was for the Five Stripes, the second-year MLS team can’t hold a candle to Club America. Thanks to the injury to its leading scorer, Atlanta went from mild to massive underdog.

Maybe the most difficult matchup to figure for the American teams left is NYCFC’s versus Tigres. The New Yorkers haven’t scored a goal through two MLS games in 2020, while Tigres is languishing in the bottom half of the Liga MX standings.

NYCFC has plenty of time to figure things out for the League campaign but needs goals now to have a chance of advancing in the Champions League. Tigres is capable of playing any MLS off the park at any moment, no matter its standing.

As an extra wrinkle, the first game of the series will take place at Red Bull Arena because of NYCFC’s venue issues. That should play in the hands of Tigres. NYCFC will need to overcome the setting and score goals to take with them to Monterrey to have any chance of springing the upset.

MLS vs Liga MX is here in a big way. It’s time to see about the gap.