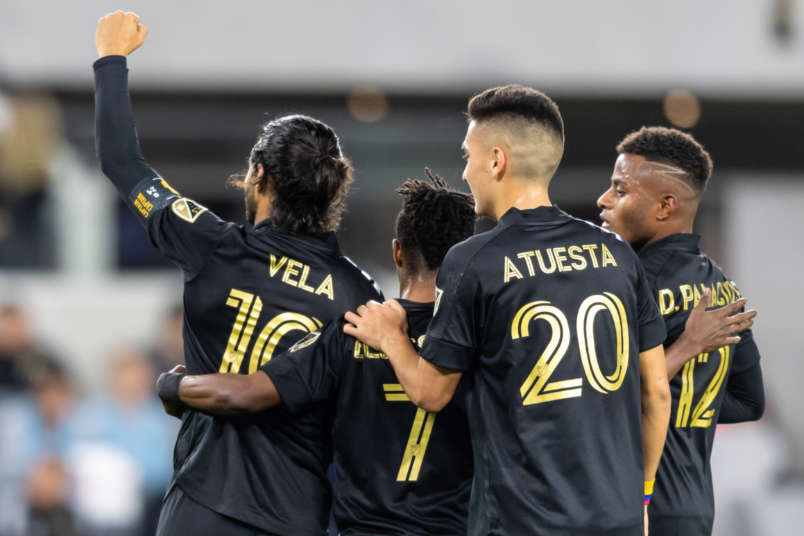 By Luis Bueno – RIVERSIDE, CA (Mar 11, 2020) US Soccer Players – As far as regular seasons go, there is no better one in league history than LAFC’s 2019 campaign. In its second year of existence, LAFC dazzled and amazed the rest of the league and was mostly unstoppable on its way to the Supporters’ Shield. Of course, the Seattle Sounders proved to be the club’s kryptonite, dashing LAFC’s hopes of a double in the Western Conference final.

That does not mean though that the team’s 2019 campaign was for naught. Because of winning the Supporters’ Shield, LAFC gained entry into the Concacaf Champions League. While initially the tournament looked like a lost cause, LAFC had a stellar comeback in the second leg against Liga MX side Leon in the Round of 16. Now, LAFC faces another Mexican side. Cruz Azul will visit Banc of California Stadium for the first leg of their quarterfinal series on Thursday.

LAFC has a difficult challenge to be sure, but they remain the best chance MLS has in finally lifting the Champions League trophy. This is happening in the third season of the club’s existence. No MLS club has won the Champions League since it looked very different in format some two decades ago. MLS clubs have come very close to winning, the closest being Toronto FC a couple of years ago, but none has yet crested that summit.

With its spectacular season of a year ago, LAFC set itself up for not only future league successes but also international triumph as well. This tournament will show not only how far the team has come and what MLS teams are capable of when run by competent people with strong financial backing. MLS Cup is always a crapshoot, but LAFC is showing that capability over the long haul and could punctuate it with a Concacaf Champions League victory.

LAFC is capable of great things already. The club set all sort of highwater marks – most points in a season (72), biggest goal-differential (plus-48), tied for most goals in season (85). Star striker Carlos Vela won the league’s Most Valuable Player after scoring a record 34 goals. Although the team left the 2019 season disappointed for not having brought the MLS Cup trophy home, that monster regular season can still bring success this year. In fact, the type of success that LAFC had is necessary to have a realistic chance of winning the Champions League.

Toronto FC’s 2017-18 teams had that flair and success that LAFC had a year ago. Toronto FC won MLS Cup in 2017 with players like Sebastian Giovinco and Jozy Altidore leading the way. The team carried over that success and play into the 2018 Champions League and got past one of the biggest obstacles MLS teams face when competing in the Champions League. Toronto best a strong Liga MX side, downing Tigres UANL in an epic quarterfinal series and got past Club America in the semifinals. They took Chivas all the way to penalty kicks before finally bowing out.

Of course, none of that matters to LAFC right now. The only thing that matters is Cruz Azul, and getting past La Maquina will not be easy. Cruz Azul sits atop the Liga MX table with a 6-2-1 record with a league-high 23 goals across those nine matches. Worse yet for LAFC, Cruz Azul has reeled off five consecutive victories and has six wins in a draw in its last seven Liga MX games.

Cruz Azul did struggle somewhat in Champions League, at least in the first leg. Cruz Azul needed two stoppage-time goals to win the first leg but wound up cruising to a 6-1 aggregate-score victory over the Jamaican side. The club features Jonathan Rodríguez, who leads the league with eight goals.

Now, Cruz Azul faces immense pressure in trying to get past LAFC. They haven’t won a league title since 1997, getting the reputation as a team that can’t finish off a championship run. Winning the Champions League will not completely erase that mark. Cruz Azul won the 2013-14 edition of the Champions League. Still, a victory of this magnitude, especially now that MLS teams are stronger than they were even several years ago would be a step forward for the club. It might give the team the confidence it needs to push through in league play.

LAFC was able to get past Leon, which was a rather difficult task. Leon does not have the history or prestige as Cruz Azul, but they’re second in the Liga MX table, just behind La Maquina, and held a 2-0 advantage heading into the second leg. LAFC though played that leg like much of it had in 2019. The club attacked relentlessly, had numerous scoring opportunities and scored goals when it matter, and some of those goals were quite easy on the eyes. Diego Rossi scored the series-clinching goal with a wicked shot from a tricky angle to put an exclamation mark on the victory.

It’s that kind of spark, fight, and intensity an MLS team needs to get through not just to the latter stages of this tournament but to beat Liga MX teams. LAFC has the firepower and the ability to do that. They showed it against Leon. If they can get past Cruz Azul, the path to the final might clear up significantly. It’s the next step to turn that epic 2019 season into a legendary feat after all.