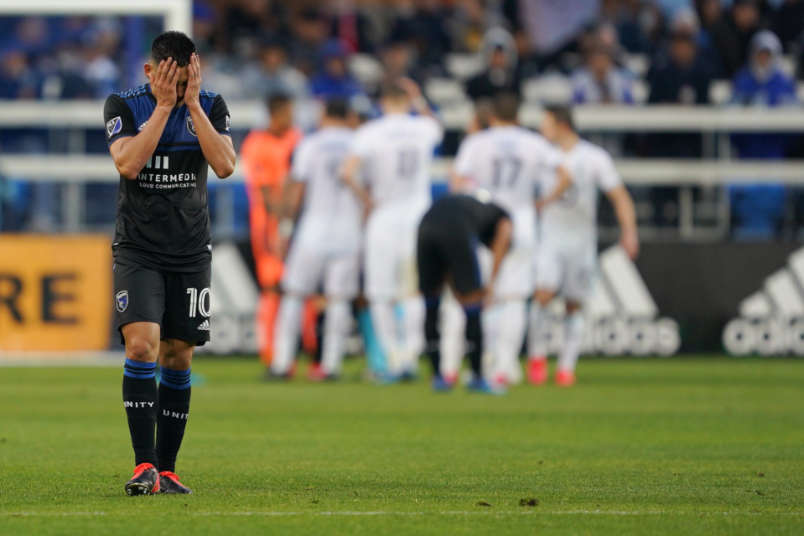 Minnesota’s 5-2 win at San Jose headlines the roundup of week 2 of the 2020 MLS season. Ike Opara put United up in the 13th minute with Magnus Eriksson equalizing from the penalty spot in the 19th. Jan Gregus made it 2-1 Minnesota in the 26th with Luis Amarilla extending the lead in the 32nd. Robin Lod made it 4-1 in first-half stoppage time. Valeri Qazaishvili pulled a goal back for the Earthquakes in the 53rd with Opara scoring again in the 71st.

“Every game’s important, and we feel that we let points slip these last two games,” San Jose forward Chris Wondolowski said. “We want to go out and get three points, get maximum points whenever we can. And tonight, Minnesota took it to us and took advantage. They played well. They took advantage of – not our mistakes – but they took advantage of their strengths and some things that we worked on that we didn’t take care of. That being said, we look at last year and I think in four games we had zero points, so we’re way ahead of pace right now so, we’ll go with that.”

New England and Chicago drew 1-1 at Gillette Stadium. Adam Buksa scored for the Revs in the 28th minute with Jonathan Bornstein equalizing in the 70th.

“It was difficult conditions,” New England goalkeeper Brad Knighton said. “The wind was whipping around. In warm-ups, it was going every which way from each sideline. In the second half, it was swirling as well, so it was really difficult to pick up crosses, through balls, balls over the top, so really tough conditions. But, I thought we did a really good job with it today.”

FC Dallas and Montreal finished 2-2 at Toyota Stadium. Maxi Urruti put the Impact up in the 59th minute with Urruti scoring again in the 68th. Zdenek Ondrasek pulled a goal back for Dallas in the 83rd and assisted on Ricardo Pepi’s equalizer six minutes into stoppage time.

DC United came back to beat Inter Miami 2-1 at Audi Field. Rodolfo Pizarro scored for Miami in the 2nd minute. Roman Torres saw red for Miami in the 54th minute for denying an obvious goal scoring opportunity. Yamil Asad converted the ensuing penalty with Frederic Brillant scoring for DC in the 61st minute.

Atlanta United beat FC Cincinnati 2-1 at home. Ezequiel Barco put Atlanta up in the 21st and assisted on Emerson Hyndman’s goal in the 55th. Yuya Kubo scored for Cincinnati in the 64th minute.

“It certainly wasn’t pretty,” Atlanta goalkeeper Brad Guzan said. “With the last two games, we’ve shown a different side in terms of being able to roll our sleeves up and fight through some injuries and adversity.”

Sporting KC shutout Houston 4-0 at home. Alan Pulido scored in the 16th with Roger Espinoza doubling the lead in the 26th. Gadi Kinda made it 3-0 in the 65th with Khiry Shelton finishing off the goals in the 77th. Tim Melia kept the clean sheet with one save.

Colorado beat Orlando City 2-1 at home. Younes Namli scored for the Rapids in the 64th with Chris Mueller equalizing in the 82nd. Drew Moor won the game in the 90th minute.

Vancouver shutout the LA Galaxy 1-0 on the road. Tosaint Ricketts scored the game’s only goal in the 74th minute with the Galaxy going a man down a minute later with Joe Corona exiting for unsporting behavior. Maxime Crepeau kept the clean sheet with one save.

Seattle and Columbus finished 1-1 at CenturyLink Field. Gyasi Zardes put the Crew up in the 33rd minute with Raul Ruidiaz equalizing from the penalty spot in the 79th.