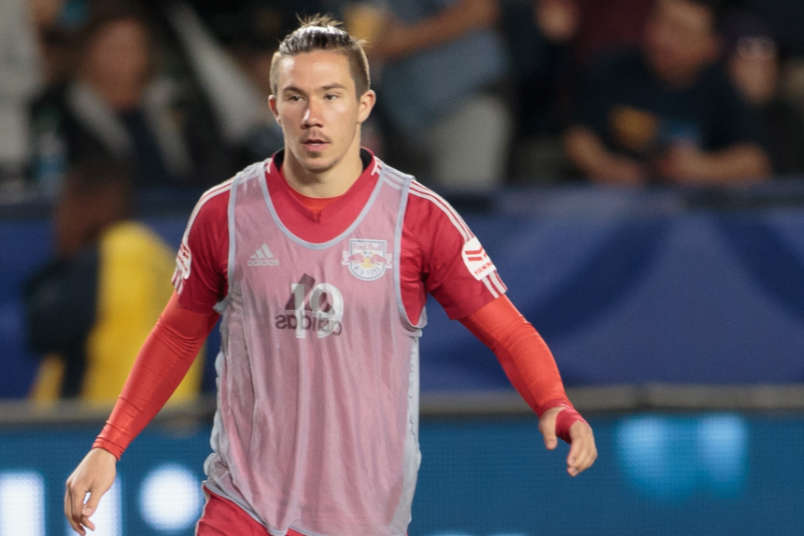 By Clemente Lisi – NEW YORK, NY (Mar 2, 2020) US Soccer Players – New York Red Bulls midfielder Alex Muyl could be the poster child for how far MLS has come over the last 25 years. The Homegrown Player, developed in the Red Bulls system, has been a member of the first team since the 2016 season.

Born and raised in New York City, Muyl was just a year old when the MetroStars, an original MLS franchise and precursor to the Red Bulls, took the field. Muyl grew up just a few miles from Giants Stadium, where the team played in those pre-RBNY days. The Red Bulls era began in 2006 after the Austrian sports drink-maker purchased the franchise. Muyl, who was raised by parents who had emigrated from France, would make his RBNY debut a decade later on April 9, 2015 against Sporting Kansas City as a second-half sub. Prior to that, he played three seasons for the USL side New York Red Bulls II as part of their academy.

He scored his first MLS goal in a 7-0 Hudson River derby win against New York City FC on May 21, 2016. By doing so, he became the first player from the New York metropolitan area to score in the derby. In all, Muyl has recorded 111 appearances during the MLS regular season starting in 69 of those games while scoring 11 goals and adding 18 assists.

The 24-year-old midfielder, who played his college soccer at Georgetown, has also played for the US Under-18 team at the 2013 Milk Cup. Muyl has also been in U-20 and U-23 camps. He also captained the US U-17 team and was a part of the US residency program in 2010. We caught up with Muyl, where he talked about his earliest memories of MLS, hopes and fears for this season, and having to deal with a tough schedule.

The season has started a bit earlier than usual this season. How excited are you to get back on the field and playing games that count?

For sure. I mean, this is the first season in a while that we didn’t have any Champions League. So it’s been nice to just focus on the season opener. Usually at this point, we are so overwhelmed with games. Like last year where we had to put out a rotated lineup.

The Red Bulls, aside from the MLS Cup, will be competing in the expanded Campeones Cup and US Open Cup so there are lots of chances still to win trophies. What to you need to do this season to make that happen?

I think, with so being in so many tournaments, we will need to rely on a lot of guys. I think preseason has been really good because we got a lot of new faces up to speed and we’re starting to learn that way people play and we as a team play. So this year, depth will be very important. In these competitions, mindset is so important. When you’re focusing on just MLS, maybe it’s easy to come out lax, a little bit soft. In those other competitions, its’ really about taking each game as a final in a way. So if we can do that, we will have a great chance.

The team lost a few veterans this past winter, something that isn’t unusual for the Red Bulls. You’ve been on this team for four seasons already. What can you do in the dressing room to help the younger players on this squad?

I mean it’s my fifth year, but I am only 24 and it still feels like I’m one of the older guys. My goal is to be a more vocal leader, someone that can help the younger guys along and make their transition as smooth as possible. I remember what it’s like to be a young guy breaking through – it’s not easy. I want to facilitate as easy a transition as possible for all the players.

The makers of the schedule haven’t been too kind to the Red Bulls. You play away three times this month – this Saturday at Real Salt Lake, followed by away at Minnesota and expansion team Inter Miami – and are at home only four times in the team’s first 12 games. How do you prepare for that?

It does pose a bit of a challenge. In a way, by having the odds stacked against us early, it’s almost a galvanizing feature of the season for us. If we can get through this part, it’s going to feel easier. Every game will feel like a hostile environment when we’re not at home. I think it’s actually going to be the best possible situation for us to just be thrown into the fire early.

Among the away games this month is a trip to Miami. There is a lot of hype around that team. You looking forward to going there and Nashville, the league’s other new team, this season?

The year we played Atlanta it was just insane. I think this team has a lot of guys that love being in environments that are hostile. It gets the best out of us. It’s going to be interesting to see some old faces. (Former Red Bulls goalkeeper) Luis (Robles) is down there. It’s going to be real interesting.

MLS turns 25 this season. It’s about as old as you. What’s your first MLS memory?

I would come and play at halftime during MetroStars games at the old Giants Stadium. That’s my first MLS memory. I think we’d get there late, so we would only watch the second-half. But I remember being on the field and running around. It was so fun.