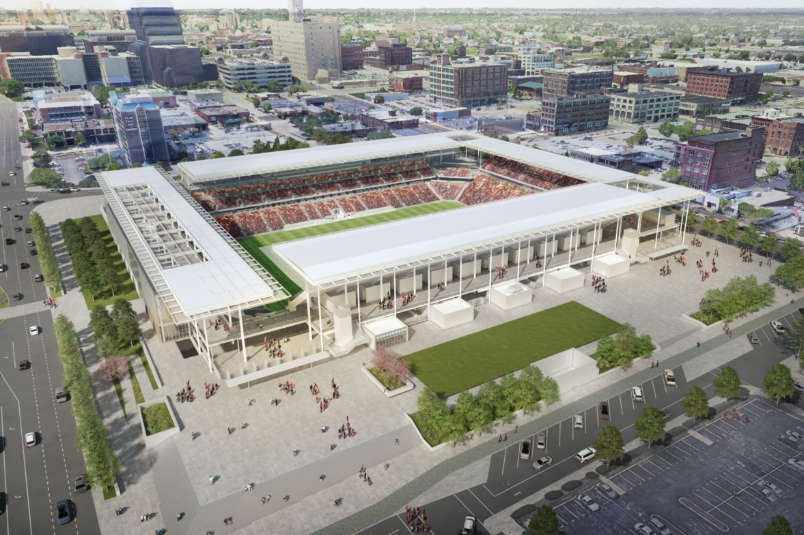 By Jason Davis – WASHINGTON, DC (Mar 18, 2020) US Soccer Players – The game is on hiatus, and most of the fans are stuck at home waiting for regular life to return. Meanwhile, preparations for the future of soccer continue in several MLS cities.

Soccer-specific stadium construction pushed MLS from unwanted houseguests in arenas not built with the game in mind to the chief tenant in glittering, state-of-the-art facilities. The league’s requirement that cities have plans for constructing soccer venues as part of an expansion bid hasn’t always applied. See you soon, Charlotte. Still, the majority of incoming franchises are engaged in some part of the process of building a stadium.

A few teams already in the league are doing the same. Namely, Columbus, Nashville, FC Cincinnati, and Miami, though the last one is more complicated.

Columbus’s new downtown stadium is in the early going of site preparation. Construction cameras showed work continuing even as the league suspended play.

David Beckham’s new team in Miami started the season with two losses but has yet to play at home. The plan was always to start life at a temporary venue in Fort Lauderdale, with an eye on taking up residence at a shiny new stadium in Miami itself in a few seasons.

For the time being, Beckham must content himself with taking Instagram videos of the empty stadium in Fort Lauderdale. The pause in the league schedule means a wait for the maiden match in the new venue. The wider effects of the virus means the process of pushing the Miami plan through local government has ground to a halt. Inter Miami investor/operator Jorge Mas is a regular font of confidence over the deal that is winding its way through the Miami City Commission, though hurdles remain.

While in Los Angeles for Inter Miami’s inaugural MLS match on March 2, MLS commissioner Don Garber reiterated that the club needs to be in Miami. “They’re going to play there as long as they have to, but they are not going to stay in Fort Lauderdale,” Garber said. “There will come a time where we’re going to have to push the envelope and get that deal finalized.”

Pushing the envelope proceeds shovels in the ground in Miami. Cincinnati is well beyond the hole-digging portion of their process.

The second-year MLS club currently occupies Nippert Stadium on the campus of the University of Cincinnati. That’s the stadium that saw the club vault into prominence when it drew more than 30,000 fans for lower division soccer. FCC’s expansion into MLS is a function of that support, but the league still mandated that the club find a way to build a purpose-built stadium near the urban core of the city.

That stadium is under construction in Cincinnati’s West End neighborhood. A peek at the webcams that monitor progress on the club’s website shows work happening as of this week, with plenty of steel in the sky to indicate the steps made in recent months. According to one of the contractors on the project, Turner Construction, there are no plans to shut down work amidst the virus crisis.

Opening the stadium in time for the start of the 2021 season makes the continuation of that work crucial. Every stadium is subject to a fragile timeline that can be thrown off by any sort of delay. If FC Cincinnati doesn’t want to be on the road for several games to start the year, the virus response can’t get in the way.

The process in Nashville isn’t nearly as far along. A bitter fight with Nashville mayor John Cooper led to delays in demolishing unused buildings at the fairgrounds site slated for Nashville SC’s planned 30,000-seat venue. That pushed back the start of construction, ensuring that the club won’t play a game in the new building until 2022.

Following a round of public sniping, the club and Cooper finally reached an agreement in February. Demolition commenced late last week, a sign that the construction of the actual stadium could start soon. There’s no word on whether the coronavirus outbreak will slow further work.

There’s also a trio of clubs working on getting their venues ready for their MLS debuts, with Austin FC entering the league next season. Despite the acrimonious launch of the club and a few hiccups in finding a site to build a venue for the Texan capital’s first top-level professional sports franchise, Anthony Precourt and company speed towards a remarkable launch in 2021.

Austin collected 40,000 season ticket deposits to date and is in the process of converting them into seats sold for the inaugural season. That season is set to take place in a 20,500-capacity arena currently under construction in the northern region of the city. Like in Cincinnati, there’s steel erected. Just last month, the club trumpeted its progress and talked up a major milestone set to come in July with the completion of the roof canopy.

Last week the club celebrated six months of construction with a video recap. Quotes this week from club leadership to MLS’s website indicate no concern. For the moment, everything looks good for the league’s third Texan team.

Sacramento’s stadium plan sat for several years while the leaders of the city’s expansion bid worked to secure a team. Now that Sacramento is part of MLS and season-ticket deposits are pouring in, the construction process is underway.

Reports suggest that work will pick up over the next three to four months. With plenty of lead time until the club’s first MLS season, the building process doesn’t need to rush. That extra time will come in handy if the coronavirus outbreak forces contractors to shut down their operations temporarily.

St Louis also has the benefit of time, though it won’t last much longer with more to do than in Sacramento. Two weeks ago, the unnamed MLS expansion club in St. Louis unveiled new renderings of the arena planned for the western edge of the city’s downtown district. Those renderings reflected a scaled-back design from previous iterations.

The state of Missouri awarded the club a $5.7 million in tax credits on Tuesday, a far cry from the $30 million the club’s ownership group originally sought to offset the cost of construction. That money will help with infrastructure work at the site. As of now, that means removing a group of highway exit ramps so that work on the stadium itself can begin.