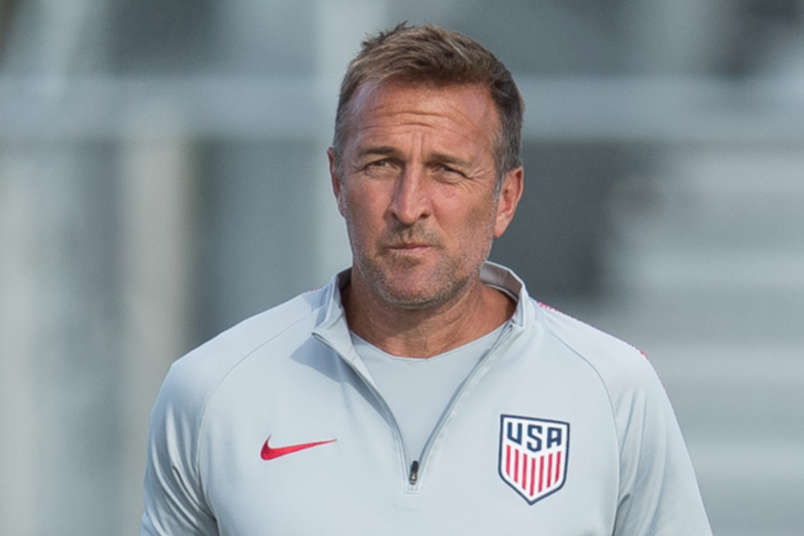 By Charles Boehm – WASHINGTON, DC (Mar 6, 2020) US Soccer Players – A painful 12-year Olympics drought and a tricky qualification path on the one hand. A highly talented and ambitious player pool on the other. A chance to chase gold, preview the USMNT’s future, and showcase themselves on a prominent global stage.

The US Under-23 national team figures to be one of the hottest stories around US Soccer this year, for better or worse. As he prepares to announce his final roster next week for this month’s Concacaf qualifying tournament in Mexico, Jason Kreis resembles not so much a coach as an accomplished plate-spinner.

His full-time gig at new MLS club Inter Miami encompasses both the senior academy director role and head coach of Fort Lauderdale CF, their USL League 1 team. Kreis and his USSF colleagues Brian McBride and Earnie Stewart have no doubt racked up both phone calls and frequent-flyer miles as they work to convince clubs across more than half a dozen countries to release their US players for this very particular international duty.

Drawn into a tough group alongside Costa Rica, Mexico, and the Dominican Republic, the US U-23s must find a way to finish first or second there, then win the subsequent semifinal matchup to book a place in Tokyo this summer. With Guadalajara, Mexico hosting the tournament, altitude and home-field advantage for El Tri add further dimensions to the task. A convoluted roster-building puzzle means that Kreis faces considerable variance in the makeup of the team he can actually construct.

Despite the Olympics’ stature as one of the biggest human events, of any kind, on the planet, FIFA has long regarded its soccer as more a threat than an opportunity. Making the men’s event a predominantly U-23 affair safeguards their World Cup’s hegemony. Thus framed as a youth national team occasion, clubs around the world are under no requirement to make their players available for it as they must for senior international activities.

Generally clubs are reluctant to part with anyone they could possibly have any use for in-season. Some prefer limiting exposure to the risk of injury regardless of that. This unfortunate reality has excluded some of the USA’s top talent from this process in several cycles.

That, in turn, forces coaches to dig further down their depth charts to build teams, testing the player pool and injecting instability. With only 16 teams participating in the Olympics proper and the host nation taking up one slot, an already-narrow road to qualification becomes downright torturous.

“If these players are playing week-in and week-out for them in MLS, the coach is probably sitting there going ‘This is my job on the line,'” Kreis said in a conversation with SBI Soccer in January. “The clubs need to have a broader picture for what is not only best for US Soccer and the continuing development of soccer in our country, but also for the development of these players and putting them on the world stage and opening up maybe a broader market for them to sell them in the future.”

Kreis named a 50-person provisional list and now must settle on a final group of 20 that works for the many stakeholders in this situation. With three slots reserved for goalkeepers, that’s a delicate task in and of itself, requiring versatility and durability for a schedule marked by games every three days.

The evolution of both the domestic and international game has shifted the selection picture further. There are reasons for clubs to welcome an Olympic experience, and exposure to a worldwide audience, for their prized performers. This is why MLS clubs have traditionally been open to releasing players voluntarily. It’s a case that can sometimes successfully be made to those abroad as well. MLS’s stated desire to ramp outbound player sales would also appear to improve the federation’s prospects of gaining releases.

Yet, there’s a push-pull effect at work. The league and the fed have a more complicated relationship than they once did. Cultivating young talent has led to more of said talent earning central roles at their clubs, thus making them harder to replace for weeks at a time. MLS regular-season games arguably matter more than they used to. The league’s rising importation of young prospects from abroad also nudges club officials to navigate some measure of consistency in responding to call-up requests from multiple nations.

Last month Atlanta United confirmed a Yahoo Soccer report that they have implemented a policy of no players released outside of international windows. Sources tell USSoccerPlayers.com that other MLS teams are likely to say no to Olympic calls at some point this year. To cap the sense of turnabout, Kreis suggested that contacts on the other side of the Atlantic are more amenable this time around.

“We’ve had five camps now and we haven’t really been told no by a European club that we wanted to call in one of these U-23 players from,” he said. “That hasn’t always been the case with all the MLS clubs.”

That only goes so far, it seems. McBride, the USMNT GM, has been charged with building deeper relationships with US players and their clubs and was realistic in a recent conversation with Sports Illustrated.

“We’re grateful to the clubs that have been somewhat receptive,” he said. “Jason and Gregg [Berhalter] have worked tirelessly to put the pool together and right now it looks pretty positive. Certainly some clubs have said, ‘we’re going to hold on to our players,’ and we’ve got to understand things like that.”

Another complicating factor is that the the full USMNT will gather in Europe for two friendlies this month at roughly the same time frame as the U-23s’ Concacaf mission. It’s a slight benefit to have the U-23 event fall across a FIFA international window. Thanks to two years of youth cultivation at USMNT level, a greater-than-usual percentage of the senior player pool is age-eligible.

Yet another angle is that the Copa America and European Championships take place in June and July. Those competitions do require player releases and add further layers to the decision-making for bigger clubs with players in those tournaments. Some technical directors are likely to say no to Olympic qualifying calls, yet could sign off on participation in the Summer Games proper. The 2020 edition runs from July 22 to August 8. Its prominence may shift the clubs’ cost-benefit analysis.

At least the US is not alone in these quandaries. France and Brazil are currently going back and forth with Paris Saint-Germain, for example, about the availability of superstars Kylian Mbappe and Neymar, who want to go to the Olympics.

As if this isn’t convoluted enough already, the specter of the global coronavirus epidemic could prevent the Olympics from happening at all. Safe to say, it’s quite a task ahead for Kreis & Co.