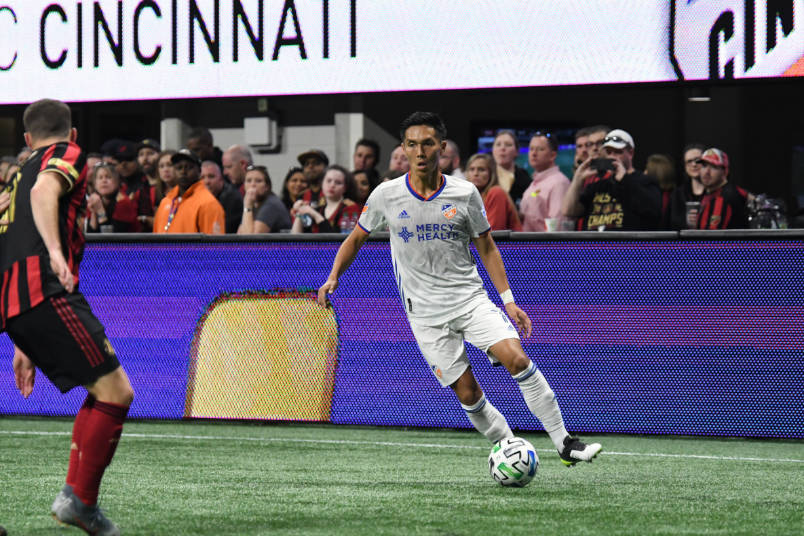 By Charles Boehm – WASHINGTON, DC (Mar 27, 2020) US Soccer Players – If Gary Walker was looking for new and different challenges when he left Manchester United to join FC Cincinnati, he’s certainly gotten them. After more than a decade as a strength and conditioning coach with the English giants, Walker moved across the Atlantic a year ago to head up FCC’s sports performance department. It was a chance to not only metaphorically build an MLS expansion team’s fitness a performance staff and culture, but literally guide the physical infrastructure of the club’s new training ground, the Mercy Health Training Center.

Cincinnati’s rough introduction to the top flight presented one set of issues. The team got thoroughly humbled on the field and has already cycled through nearly as many head coaches in 12 months as Walker worked under in some 11 years in Manchester. Now the COVID-19 pandemic has introduced another batch of adversity.

Like most everyone else in society, players at FCC and across MLS and USL find themselves in a truly unprecedented situation as public health directives keep us all in our homes as much as possible. Social distancing not only rules out team practices and workouts but also limits access to gyms and similar facilities. The built-in uncertainty of the situation is wreaking havoc on even the best-laid plans.

“There’s far more many important things going on in the world right now than football,” Walker said in a conference call with reporters this week. “But this is our industry and what we’re paid to do is support our players, so that’s what we’ll do during this period. From my perspective – I’m from a physical perspective, but also from a technical staff’s perspective – it’s a difficult period. We’re only nine weeks into the season, and then the season gets suspended. So that obviously produces a lot of challenges for us.”

MLS-based sports scientists like Walker already had to account for the league’s schedule shift. Last season ended a month earlier than before with a longer offseason as a result. Now they’re scrambling to keep housebound players as fit as possible in a scenario with no clear end in sight.

“When the first MLS training moratorium came out, it was only a week,” noted Walker. “That’s not so much of a problem, because we know that physically, de-training doesn’t happen in that period of time. A lot of the strength and power components, the fitness components, within a week is not a problem. But it’s once you start to get to two weeks and three weeks and longer, we know that the players will start to de-train. And there’s been a long offseason – we have that preseason period to develop players back up and then there’s that period now where they’re in a de-training period if we don’t provide them programs.”

Cincy’s squad has individualized training regimens. Guidance is offered, especially for younger and single players, on how to shop for and cook nutritious meals even in a time of shortages and limited movement. Most clubs typically provide breakfast and lunch at their training grounds, so that’s another level of control over their health that’s been lost for now. In a nod to both the virus of the moment and the general disruption to their routines, even sunlight is a restricted commodity right now, Walker and his staff are also prescribing supplements to boost their immune systems.

They are conducting daily polls to learn about players’ ongoing levels of sleep, soreness and the like. Technology like Skype, WhatsApp, and the Kitman Labs system used by FCC can help keep everyone in touch and on track. The staff is still hoping to seal arrangements with area gyms or health clubs to eventually get their players some alone time in the otherwise closed facilities.

“One of the biggest problems we found is that from a cardiovascular perspective, so from the fitness of the heart and lungs, this is quite simple because we can prescribe them running sessions, the players can still go out and run individually,” said Walker. “But what we’re also required to do is to try and increase or really to maintain the overall strength of the legs, and then isolate the muscle strength in terms of groins, hamstrings and things like that that are more routinely injured during the season. So we want to try and keep them robust and resilient and strong. But because our players don’t have access to gyms, because obviously everything has been closed down in terms of the social distancing and everything that that entails, it’s then trying to be a little bit more creative around the program that we can provide the players that require relatively little equipment, or a lot of body-weight exercises for that, to try and overload specific components.”

Yet another wrinkle for Cincinnati, currently without a permanent head coach due to Ron Jans’ sudden and controversial departure earlier this year, is the prospect of a new boss arriving in midstream.

“When you change things within the season, and you completely change the training methodology and a philosophy, that’s generally when players get injured,” noted Walker. “Players are creatures of habit and the body responds to stimulus. And if they get a different stimulus, then the body responds in a different way, and that adaptation occurs and sometimes players will break down because of that. I think that coaches are aware of that. It’s then trying to manage them areas of how that happens within the season to try and mitigate. Our players are assets and you want to try and keep as many of them as available as possible.”

While no one’s sure exactly when MLS play will resume, it’s becoming clear that the squads will have to hit the ground running when it does. Commissioner Don Garber has reiterated the league’s intent to play a full 34-game slate, and US Soccer may yet find a way to cram in the US Open Cup somehow.

Even with the option of extending the calendar into December like before, it’s quite likely to present players and coaches with even more stress and strain than usual, via more double-game weeks than ever before. The standard rule of thumb is that each week off from regular training activities requires one corresponding week of preparation to return to full fitness. So the reconfigured schedule could well demand more of the athletes than they’ll be physically capable of providing, particularly when summer heat.

“You would suggest if the players were going to be out of training for two weeks, then maybe two weeks is what they’d be required back in. If it’s three weeks, maybe three weeks,” said Walker. “We appreciate that might not be possible. But I think people talking about the health and safety of our players, then that’s going to be really important, given that they’re going to have to play a large number of games in quite a short period of time.”