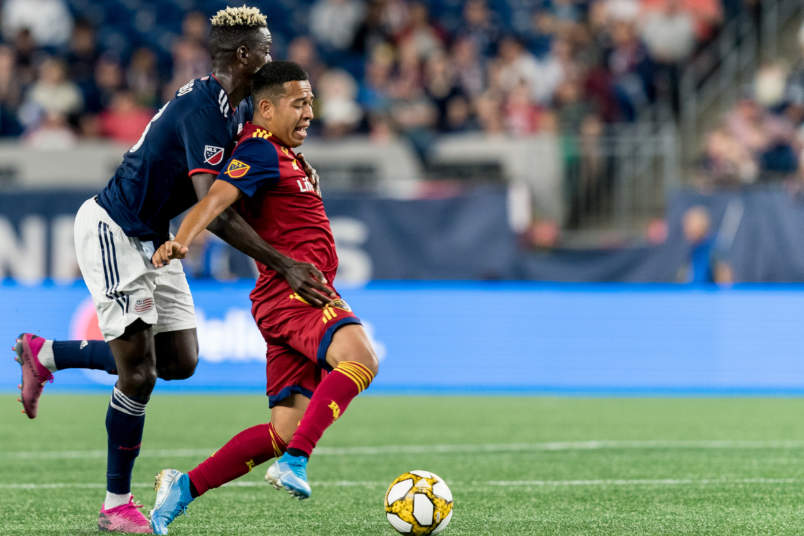 By Luis Bueno – RIVERSIDE, CA (Mar 25, 2020) US Soccer Players – When Sebastian Saucedo opted to leave Real Salt Lake in December, the move raised eyebrows. It was not that another MLS Homegrown Player was opting for greener pastures abroad. Such moves are commonplace and will only continue as the league grows. What drew attention to Saucedo’s exit was his destination. Unlike looking to head across the Atlantic Ocean, Saucedo opted to go south and signed for Liga MX side Pumas UNAM.

Americans playing in Mexico’s topflight was somewhat commonplace just a decade ago. US-eligible players turned out for clubs such as Pachuca, Tijuana, Santos, and Puebla over the last 10 to 15 years. Opportunities for young Americans, particularly young Americans with Mexican heritage, opened up. Youth players made their way south on a somewhat regular basis.

That is not the case anymore. While Liga MX remains the top league in Concacaf, it’s no longer a major destination for young Americans. The league continues to dominate regional competitions like the Champions League, and El Tri continues to succeed on the international stage, but the league’s draw itself has waned.

Several reasons may be contributing to the league’s inability to pull Americans in large amounts. Among them are European clubs seemingly targeting young Americans with renewed vigor and the rise of MLS itself.

Young Americans have always viewed Europe as a destination. That wavered between a dream and a viable option. It seems that it is closer to becoming a reachable ambition with the number of youngsters heading to Europe. Take the most recent US youth roster, for example. Of the 23 players selected to the US Olympic qualifying squad, five play abroad. Chris Gloster and Richard Ledezma are with PSV Eindhoven, Ulysses Llanez is with VfL Wolfsburg, and Erik Palmer-Brown is at Austria Vienna on loan from Manchester City. The fifth is Saucedo. All five got their start with MLS teams and played on USL affiliates before heading abroad.

Perhaps the decline in Liga MX’s pull can be seen with the likes of Ledezma and Llanes. Both players were born in the US and have Mexican heritage, yet neither chose to pursue careers south of the border. Ledezma, a product of Real Salt Lake’s youth system, moved from Real Monarchs of the USL to PSV. Llanez played with LA Galaxy II before joining Germany’s VfL Wolfsburg.

LA Galaxy youngster Efrain Alvarez has also remained in the US While just a teenager, Alvarez could stick around with the Galaxy for some time. He’s gotten plenty of opportunities to play with the first team and has taken advantage of his chances. Alvarez has competed for Mexican youth national teams but could still switch to the US.

The flow of players south may be halted somewhat not just by the lure of Europe but also by home cooking. MLS continues to grow in stature and size. There will be 28 teams looking for talent before long. More teams mean more spots for American players to land. The chance to not only play but earn a high salary already exists. The numbers might look better in Europe, but it’s easy to overlook the tax rate.

MLS has also become a draw for Liga MX players and Mexican national team talent as well. Players such as Javier “Chicharito” Hernández and Carlos Vela opted for MLS instead of Mexico when leaving the Old World for the New. Players such as Oswaldo Alanís, Alan Pulido, and Rodolfo Pizarro moved from Liga MX to MLS this offseason.

Now, Liga MX is not entirely devoid of American-born talent. Aside from Saucedo, two Americans have played for Necaxa this season. Phoenix-born Ventura Alvarado has spent his entire career in Mexico while Fernandez Arce Jr, born in San Diego, has also seen time for los Rayos this season. Neither player had any ties to MLS teams as each went through Liga MX youth systems, Alvarado with Club America and Arce with Club Tijuana, where his father Fernando Arce Sr played.

Liga MX still has plenty to offer. Teams like Club America and Cruz Azul have amazing history and tradition while Monterrey and Tigres UANL have enjoyed a wealth of success both domestically and internationally. The chance to play for prestigious clubs in big cities with enormous support is unmatched in the region.

Certainly, that was alluring for Saucedo. Pumas is one of three topflight teams to call Mexico City home and has a passionate fan base. The move was a step up in Saucedo’s career. Not only did he join a prestigious club in a high-profile league, but he also got a bump in pay.

Saucedo made an immediate impact for Pumas, scoring on his debut in the Clausura 2020 season. Saucedo had started each of Pumas’ ten league matches before the league shut down due to the coronavirus. Had he had the opportunity, Saucedo likely would have continued as a fixture for Pumas this season while also helping the Americans compete for a spot in the Tokyo Olympics. Still, it seems that Saucedo’s move from MLS to Liga MX is becoming more of the exception than the norm.