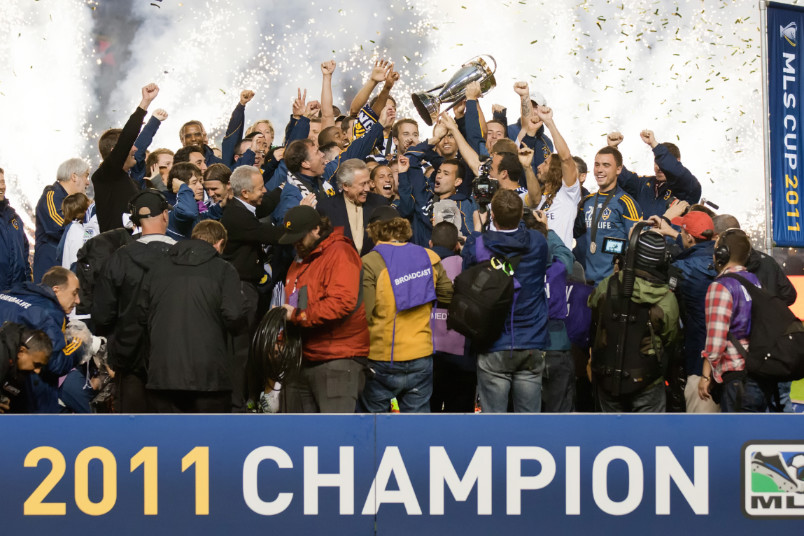 By Clemente Lisi – NEW YORK, NY (Apr 6, 2020) US Soccer Players – Major League Soccer has produced a number of memorable matches over its quarter of a century. That includes the playoffs, designed to increase the intensity and raise the level of play. If all goes as planned, that concludes in a competitive MLS Cup. Major League Soccer decided from the beginning to follow the North American norm of being a playoff league. No team enters the season thinking that winning the Supporters' Shield is good enough.

MLS has had 13 different teams lift the trophy. The Los Angeles Galaxy have the most titles with five. They also have the most MLS Cup Finals appearances with nine. Second on the list is DC United with four championships in five appearances. Four teams – Houston Dynamo, Sporting KC, Seattle, and the San Jose Earthquakes – are next on the list with two titles apiece.

16 of the league's teams played in an MLS Cup Final. The New England Revolution appeared in five championships without winning the title. The Chicago Fire, meanwhile, captured MLS Cup in its inaugural season in 1998, the only expansion side in league history to win it all in their first year and their only league title. Here are six MLS Cup Finals that stand out above the rest.

You really can't do any kind of MLS retrospective without including the very first champions. It isn't only because DC United were the first, but it's also the way they did it and how Bruce Arena's side would go on to create the first MLS dynasty.

The inaugural edition of the final itself was happened on October 20 at Foxboro Stadium outside Boston. DC United faced off against the Los Angeles Galaxy, pitting two teams loaded with both American and foreign talent. The other protagonist that day? Heavy rain and a water-logged field. The match was played in harsh weather conditions due to Hurricane Lili, which struck the East Coast that weekend. Despite the rain, 34,643 fans were in attendance, including a large contingent of traveling supporters from the nation's capital.

In the end, a golden goal by Eddie Pope four minutes into overtime broke the 2-2 deadlock and gave DC United the trophy. The team would go on to win the title again the following year and in 1999. After the game, DC United captain John Harkes told reporters, "Soccer fever is alive in the United States and it's going to stay. Before the game, the players were thinking about 14,000 or 15,000 would show up in this weather, but this was unbelievable."

2001: San Jose Earthquakes are “Golden” thanks to DeRo brace

The all-California game played out on October 21 at Crew Stadium in Ohio. Level at 1-1 after regulation, the Quakes won their first title thanks to Dwayne De Rosario's goal in the 96th minute, which marked his second of the day. The game featured lots of firsts. It was the first MLS Cup Final to pit two teams from both the same conference and state. Earthquakes coach Frank Yallop became the first former MLS player to coach a team to an MLS Cup title. Crew Stadium became the first soccer-specific venue to host an MLS Cup Final. Landon Donovan won his first Cup as an MLS rookie with San Jose.

2007: Dynamo down the Revs for a second straight year

The '07 Cup was a rematch played on November 18 at RFK Stadium. The Dynamo came back to win 2-1 after Taylor Twellman put the Revs ahead in the 20th minute. Second-half goals from Joseph Ngwenya and Dwayne De Rosario sealed the title. Houston became the second team to win consecutive MLS Cups, while New England lost their third straight championship match.

MLS Cup '11 featured the star-studded Galaxy against the Dynamo in Carson on November 20. The Galaxy won the game 1-0 on a Landon Donovan goal in the 72nd minute. David Beckham and Robbie Keane assisted, putting the Galaxy's full star power on display.

As a result of the win, the Galaxy became the first team since the Columbus Crew in 2008 to snag both the Supporters' Shield and MLS Cup in the same season. It also marked the first league championship for LA since 2005. The Galaxy would win MLS Cup again the following year and in 2014.

For Beckham, the trophy was revenge for critics who said his time in LA had been a failure. The former England international told reporters after the game: "A lot of people said if we didn't win… it would have been an unsuccessful five years. It's nice to keep a few people quiet." Beckham would win the trophy again in 2012.

The 18th edition of MLS's showcase game was between Sporting Kansas City and Real Salt Lake on December 7 at Sporting Park. The match was the coldest MLS Cup Final on record as temperatures dipped to 20 degrees. The game ended 1-1 after regulation time and extra time. In the penalty-kick shootout, Sporting KC won 7-6 after a marathon 10-round session, the longest shootout in Cup history. Defender Aurelien Collin converted the winning penalty to give his team the championship. The game was riveting despite the frigid weather. Sporting goalkeeper Jimmy Nielsen had a great outing and turned out to be the shootout hero.

2015: Portland wins it all for the first time

The Portland Timbers won on December 6 against the Crew at MAPFRE Stadium. Diego Valeri scored the quickest goal in MLS Cup history, putting the Timbers up after just 27 seconds. The Timbers doubled the lead six minutes later with a strike by Rodney Wallace and never looked back with the 2-1 win.

Portland's victory was the first title for one of the league's three Northwest teams, ahead of Seattle and Vancouver. The Sounders later won two championships in 2016 and last year. The Timbers victory also marked the city's first pro men's championship since the Portland Trail Blazers won the 1977 NBA title.