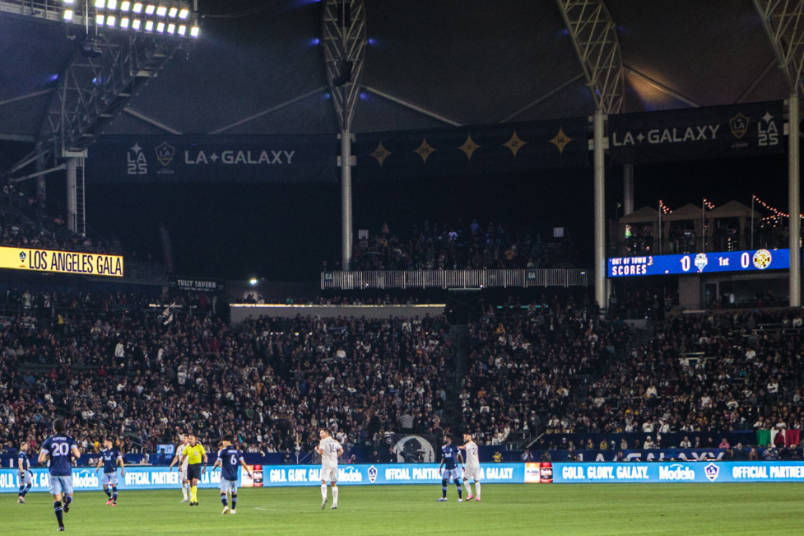 By Luis Bueno – RIVERSIDE, CA (Apr 8, 2020) US Soccer Players – This was supposed to be LA’s year in MLS. Los Angeles FC already had a great spotlight due to last season’s success. The LA Galaxy meanwhile went from one superstar to another. The clubs were not only going to grab the spotlight within Major League Soccer but were also poised to dig further into the city’s sports landscape. Then life happened.

MLS, like every other major professional sports league in the country, hit pause on its season. Schedules are now To Be Determined with tentative restart dates that are as solid as sand. The season may start back up in May, as is the current plan, or it may not. Nobody knows the date for the next MLS kickoff, Major League Baseball pitch, NHL faceoff, or NBA tipoff.

With the entirety of the United States slowing or stopping due to the COVID-19 global pandemic, sports has taken a backseat. There will come a time though that the league and its clubs will take the spotlight once more. For LAFC and the Galaxy though that return to normalcy will feature a battle the teams had mostly already fought. The battle for respect and attention within LA.

The respect is there and has been for a while. LAFC games are a hot ticket item. The Galaxy’s newest star Javier “Chicharito” Hernandez fit right into the A-list crowd once he arrived in Southern California. Sports leagues in general will have to fight for respect and attention once governments and common sense lift the stay-at-home orders. The public will have an abundance of choices with how to spend their time outside their homes, and the options in Southern California are plenty.

LAFC and Galaxy games might be up against Dodgers, Angels, Lakers, Clippers, Kings, and Ducks contests. All will be up against the likes of Disneyland, Six Flags Magic Mountain, Knott’s Berry Farm, the Pantages Theater, concert venues, beaches, movie theaters, restaurants, and shopping malls reopening, potentially all at the same time.

Already this year was going to be difficult for the LA clubs to maintain relevance in the LA sports market. The Lakers and Clippers were each destined for the NBA postseason. The Lakers held a Western Conference-best record of 49-14 while the second-best record belonged to the Clippers (44-20). A playoff meeting would have, and would still, captivate the city of Los Angeles.

The LA Dodgers meanwhile traded for star Mookie Betts. The team seems poised to run away with the Western Division title with its sights clearly set on their third World Series trip in the last four years. The NFL is going to make its impact too. The Rams and Chargers are set on opening up SoFi Stadium this fall. The new stadium will be the shining jewel of Los Angeles sports venues, taking attention away from the other LA sports teams.

Fighting for scraps was not supposed to be in the works for either MLS team this year. For LAFC, the goal was to win MLS Cup while the Galaxy was trying to get back to being a championship contender. Both teams were keen to one-up each other to try and be the top soccer club in a competitive sports market.

For LAFC, the club’s march to a championship could have taken another step forward. The team won the Supporters’ Shield a year ago. They ousted the Galaxy from the playoffs but fell short of reaching MLS Cup thanks to the Seattle Sounders. This year, the team looked sharp in the few contests it got to play, and another run at the Shield and MLS Cup seemed in the books. Carlos Vela was back to his MVP self while Diego Rossi came through with a big goal in the Champion’s League. LAFC’s game against Philadelphia was the best of the short season. Cruz Azul was ready to play LAFC in the Champions League before the lights turned out. LAFC vs Cruz Azul in Mexico City would have been an epic battle.

The Galaxy meanwhile was not at all content with the way 2019 ended. The team did reach the playoffs for the first time since 2016 and knocked out Minnesota United FC. Still, losing to LAFC compounded the club’s problems. They responded by putting together a decent offseason, highlighted by Hernandez’s arrival from La Liga. The Galaxy did not look like an MLS Cup contender in either of its first two games, drawing 2-2 draw at Houston and a 1-0 home loss to Vancouver. However, coach Guillermo Barros Schelotto is good at what he does. The team was certainly going to be playing better by this point in the season.

Instead, LAFC and the Galaxy are spending time doing nothing. The Galaxy is reminiscing on social media about the early days of MLS while LAFC is spending time providing messages of support and community outreach on its platforms. This was not what either club had in mind.

When the league starts back up is anyone’s guess. The longer this lags, the more each club will likely have to battle against rust. The hope is that the league can handle a restart without it looking like preseason. When the gates do open and Southern California residents have the myriad of options at its disposal once more, it would help to have two winning soccer clubs.