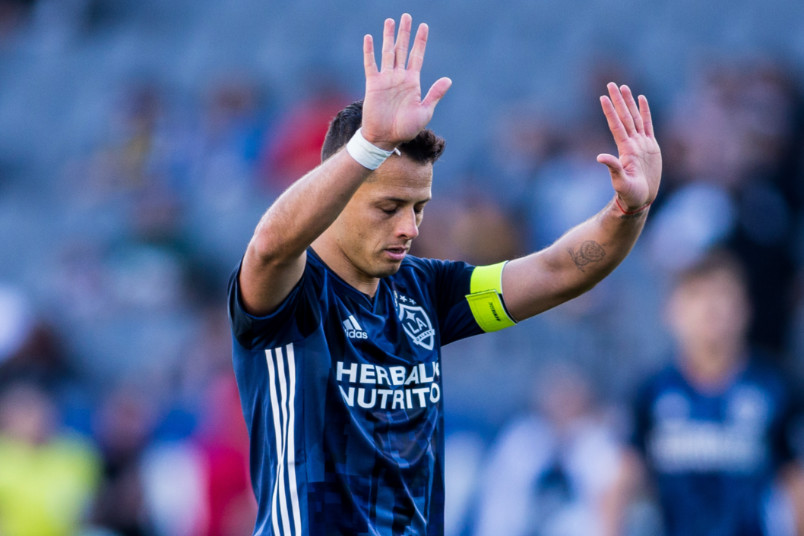 By Luis Bueno – RIVERSIDE, CA (Apr 29, 2020) US Soccer Players – Everyone loves a new toy. What better joy than getting that new gadget, gaming system or television and putting it to immediate use. After countless hours of use, it’s difficult to imagine how life was before this new thing became an instant fixture. It’s a different emotion to get a new toy and have it kept safely behind lock and key, out of sight and out of mind.

For the LA Galaxy, that new toy was Javier “Chicharito” Hernandez. After years of fantasizing about the Mexican standout playing in MLS, the Galaxy nabbed him and welcomed him stateside. Thanks to the Covid-19 global pandemic, though, MLS shut down with the Galaxy playing just two games with its star newcomer on the field.

Hernandez played just long enough to both excite and worry Galaxy fans. This downtime only serves to frustrate and confuse onlookers regarding one of the Galaxy’s biggest acquisitions in the last decade.

The excitement caused by Hernandez’s acquisition stalled, but the sampling size he provided gives room to pause. Expectations might be adjusted when the Galaxy begins play, whenever that may be. The first impression was not a great one. There are warning signs that did not appear to be present before the season.

New players seemingly always take time to adjust before the club can return dividends on its investment. Perhaps it is the heightened expectations that come with new arrivals, especially high-profile players, or the change in soccer culture from club to club and league to league. Newcomers don’t always hit the ground running. The Galaxy, of course, experienced the opposite with its last big move. Zlatan Ibrahimovic scored two goals on his debut in 2018 and led the Galaxy to a dramatic 4-3 comeback win over LAFC. The Galaxy’s previous two sparkling additions were more muted. Giovani Dos Santos and Steven Gerrard came in with great fanfare and stalled from the start.

Regardless, the Galaxy will not get to use its latest arrival for some time. The Covid-19 shutdown has many cruel side effects, and this is one of them. All MLS teams are in the same situation with regards to their new players. Teams spent time scouting players, reaching out to them and their representation, paying money in some cases to former clubs just to get them in the door. Then comes time needed to adjust to life in a new city, getting to know teammates, coaches, and other club members well before players can start to learn how to fit into a new scheme, a new system with new players, and a new gaffer.

The Galaxy did things right with Hernandez. He came over on a hefty transfer fee from La Liga’s Sevilla. The Galaxy convinced Hernandez that not only was it wise to come to MLS but to do so just months after joining Sevilla, where he played in nine of a possible 19 matches. Of course, it took more than just convincing. The price tag was a $10 million transfer fee plus a reported $6 million base salary. Now that he’s here in Southern California, extended downtime is not what the club paid for.

The situation is not unique to the Galaxy here in Los Angeles. The LA Dodgers acquired who many baseball observers believe to be one of the best players in baseball in Mookie Betts as the team tries to return to and win the World Series for a change. The LA Angels meanwhile brought in slugger and World Series champion Anthony Rendon to create a loaded lineup. The LA Rams and Chargers meanwhile eyed summer 2020 as the opening for the brand new SoFi Stadium. To make a splash in Los Angeles’s sporting landscape, whatever the sport, takes a tremendous effort and requires attention-grabbing measures.

Hernandez meanwhile is waiting with the Galaxy. Whenever his second preseason begins, Hernandez will have the chance to showcase his skills since he did very little of that in his 180 minutes for the Galaxy this season. One highlight that got some play was him waving his arms in frustration at lack of service from his teammates during the season opener at Houston. Hernandez was equally inefficient in his home debut as the Galaxy was surprised by Vancouver 1-0. For its efforts and investment, the Galaxy has received two shots, no goals, and no assists.

Two games and a suspended season isn’t enough for quick judgments. The Galaxy’s major summer acquisition a year ago also took some time to get adjusted. Cristian Pavon joined the team in August and also did not score in his first two games. In fact, it took Pavon four games to score and after eight games he had just one goal. Pavon scored two goals in the last three games of the regular season and added another goal in the playoffs. He also accounted for the Galaxy’s only goal of 2020.

Hernandez will get his chance. Whether it’s in front of an empty stadium, the games will eventually return. With them is the pressure that Hernandez signed up for when he chose to move to MLS. He’s a marquee player on a team known for them, facing the weight of those successes and failures that came before.