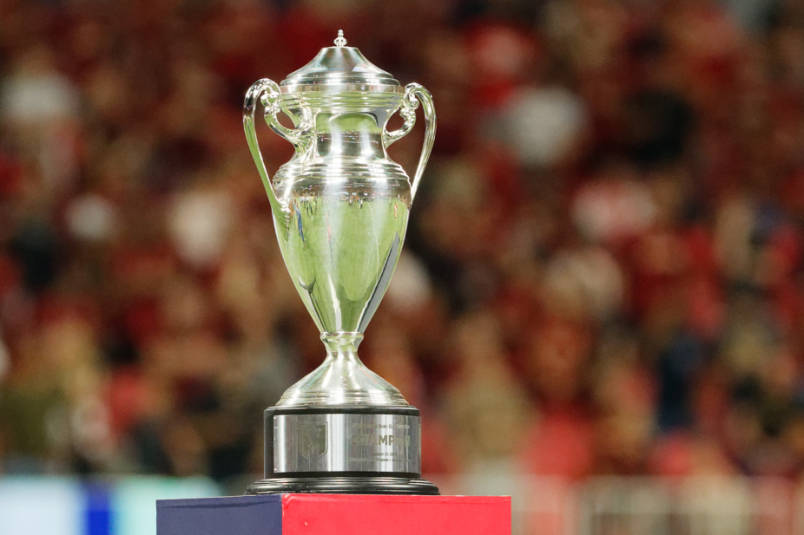 By Jason Davis – WASHINGTON, DC (Apr 15, 2020) US Soccer Players – The chances are slim that 2020 will be the year that a lower division team springs a Cinderella run and lifts the US Open Cup for the first time since 1999. That would be true even without a pandemic and the likely changes to come for America’s oldest knockout sporting event. Whatever US Soccer chooses to do with this year’s tournament, the challenge for a non-MLS team will be as tricky as ever.

The last lower division team to beat the odds and lift the Open Cup was the Rochester Raging Rhinos in 1999. That group, a motley crew of veteran players coming off an A-League championship the year before, beat four different MLS teams on their way to the title. The Rhinos benefited from a strong home-field advantage at their converted baseball stadium during the march to the championship, finishing the job with two wins at neutral venues.

MLS fans likely remember Pat Onstad most for his stint as the number one keeper for Dom Kinnear’s Houston Dynamo teams during their excellent run towards the end of the 2010s. Back in ’99, however, Onstad was the starting goalkeeper for the Rhinos, having just made the move to the US following a year with the Toronto Lynx of the A-League. He played a crucial role in the Rhinos’ Open Cup tournament, but it was a veteran character throughout the squad that pushed Rochester to their unlikely win.

“I think probably our average age was 27 or 28. It was an older group,” Onstad said. “We didn’t have so many young guys. I think for all we knew it was a kind of our last chance for most of us to be able to prove that we belong and you could be at that level. So when we had the Open Cup games, they were feisty affairs.”

Major League Soccer was still new when the Rhinos knocked off the Chicago Fire, Dallas, Columbus, and the Colorado Rapids in consecutive rounds to win the Open Cup. Though the differences between divisions weren’t as defined then as it is now, there was still a “David vs Goliath” vibe to the Rhinos’ march through the tournament.

The Rhinos’ roster was full of players good enough to play in MLS. At the time, the combination of indoor soccer and outdoor game in the A-League provided a better living than MLS could offer. MLS teams passed over some of the Raging Rhinos, but some just made the better financial decision. There was still the desire to prove topflight status for the team playing in a minor league baseball stadium.

“I mean, it was a little crazy. If I remember correctly, it was Chicago who I believe was the first game that we played against an MLS team,” Onstad remembered. “They’d just come off a championship themselves. They had a great team, a fantastic team. Like most MLS in the early rounds, they didn’t play their full team at the beginning of the game and I think we had a little chip on our shoulder. We had a few guys who were a little feisty. There was even a bit of a dust-up in the baseball dugout believe it or not, but it’s difficult. It’s a tough place to play and we were always up for those games at home.”

Nothing says “feisty” more than the 50 fouls the Rhinos committed in the win against the Fire. Rochester’s feistiness frustrated the Dallas Burn in the quarterfinal round, as did the dimensions of Frontier Field. Burn striker Jason Kreis famously said after his side’s defeat in New York that the Rhinos would “get their butt beat on a real field.”

Rochester played Columbus in the semifinals in what Onstad described as a “gale” in Virginia Beach, Virginia. Hurricane Floyd was just a few days away from making landfall south of Virginia Beach and traveling up the coast. The strange conditions worked to the Rhinos’ favor. Though Onstad said he couldn’t remember performing well in goal, the A-League club triumphed 3-2 over the MLS side. The semifinal win over Columbus was part of a doubleheader with the other semifinal between the Colorado Rapids and the Charleston Battery. Just over 2,000 fans attended the game.

The final in Columbus, where the Crew had just opened the first MLS soccer-specific stadium a few months prior, drew slightly more fans. 4,500 people watched from the Crew Stadium bleachers as Onstad’s Rhinos upset the Rapids 2-0. Rochester completed their Cinderella run to the Open Cup title and may have hurt their chances at an A-League repeat in the process.

“We were focused on the final,” Onstad recalled. “And in fact, I think that probably hurt us in the league final, which was a week later, I believe. But at the same token, we wanted to prove that we could play with the MLS guys. So for us, this was our MLS Cup, this is what we focused on. We kind of put the A-League on the back burner and focused on this game.”

Onstad and his teammates had no way to know that they would be the last lower division team to win the Open Cup. Twenty-one years later, the Open Cup is a closed shop with MLS slotting in as champion and taking the extra place in the Concacaf Champions League.

As MLS grows and the money spent at the top of the pyramid gets bigger, it becomes more difficult to imagine anyone matching Rochester’s feat. Will Onstad’s team be remembered forever? For the man who went on from nearly retiring just before he moved to Rochester to winning MLS Cup titles with the Dynamo, the Open Cup would be better if another lower-division team reached the same heights as his Rhinos.

“I think it’s always exciting when you have the lower leagues make some runs,” Onstad said. “Obviously it gets harder and harder when there’s more MLS teams. The level of MLS has increased significantly. It’s difficult. But listen, if someone could do it, that would be fantastic.”