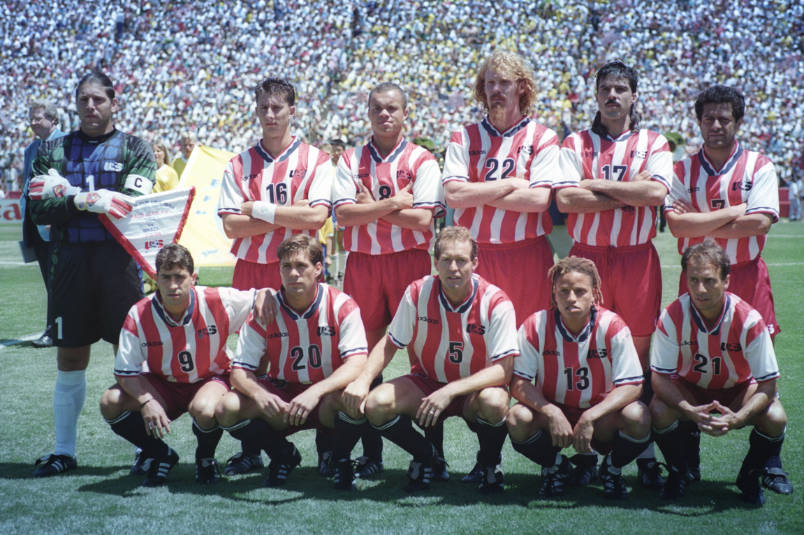 By Charles Boehm – WASHINGTON, DC (Apr 10, 2020) US Soccer Players – MLS marked its 24th birthday this week, celebrating the anniversary of its inaugural match back in 1996. With the current season suspended indefinitely, the coronavirus pandemic has imposed some awkwardness on the milestone. Yet the situation may also give us a bit more mental bandwidth to process and appreciate just what a journey it’s been from that scrappy 1-0 game between the San Jose Clash and DC United at Spartan Stadium.

Surviving to this point has cost MLS’s owners, players, and employees a great deal of blood, sweat, tears and, treasure over the past quarter-century. Many of those stories have been told through the years. What younger audiences may be less familiar with is just how much the league has always relied on USMNT talent, both on the field and in the marketing domain.

A groundbreaking generation of US players first surprised the world by qualifying for the 1990 World Cup in Italy. That paved the way for a successful tournament on home soil four years later, where the team’s spirit and character charmed a nation that was in large part either uneducated about soccer or outright hostile.

“They had big personalities on that team,” noted DC United’s first president Kevin Payne in a recent conversation with me. “They weren’t technically the best, probably weren’t tactically the best. Although I think in ’94 our team was tactically was pretty sophisticated because Bora [Milutinovic] spent a lot of time on that. But they had big personalities and guys that that really stepped on the field and weren’t afraid of anybody.”

I spoke to many of those involved in that inaugural game for two retrospective pieces on MLS’s website, and the value of the boys of ’94 was a recurring theme from those conversations. It’s probably impossible for older heads to fully convey just how differently the sport was perceived in the United States back then.

“Today’s reader would think of soccer and think, ‘OK it’s not one of the big four [sports] but it’s probably No. 5 with a bullet, and it’s gaining on the other major sports,” explained Rick La Plante, the Clash’s first communications chief and a former journalist who’d previously covered the beautiful game. “But in 1996 outdoor soccer had virtually no following in this country.”

The task facing the new league’s leaders was enormous, and there was little precedent or inherited knowledge for them to work off. This extended from the pitch to the boardroom to the broadcast booth. The national teamers were one of their few trump cards as they tried to convert the World Cup momentum into a lasting place on the American sporting landscape.

“We were trying to sell it. Anything that could kind of hold your interest and make people talk. And obviously, the US players were a big selling point,” noted Rob Stone, one of soccer’s most prominent television personalities in MLS’s early years. “The [John] Harkeses, the Tabs [Ramos], the [Tony] Meolas, [Eric] Wynaldas, [Alexi] Lalases, eventually the [Brian] McBrides and such, were bigger calling cards for the league then. These international guys that we got in, really only a few people knew of, and if you did know them it was probably because you had some ancestry from that country. So we really were in the star-making business, and we were in the educating business.”

In that regard, it was fitting that Wynalda scored the league’s first-ever goal, rescuing all involved from the dreaded scoreless tie that loomed as the game entered its final minutes. A maverick personality both then and now, the outspoken striker could inspire and infuriate in equal measure. It turned out that was a quality that the fledgling league badly needed, even if those in charge didn’t always recognize as much.

“He could be my biggest nightmare and my biggest blessing within 30 seconds of each other. Maybe the most fascinating human being I’ve ever met in my life. I mean that sincerely,” recalled La Plante with a laugh.

La Plante recounted a moment in one of San Jose’s final training sessions before the big game where Wynalda charmed the press pack with an impromptu display of charisma.

“In the middle of the workout some little kid runs right out into the middle of the training session, and he runs close enough so that Eric scoops him up – and I will never forget this – Eric lifts his head as he’s lifting this little guy, and he finds a television camera, and he runs directly toward the camera,” said La Plante. “Eric had just a natural sense of the moment. He wanted to make sure that cameraman saw him scooping that kid up and carrying him off the field. That’s the kind of thing Eric would do for us. Almost intuitively he knew how to help us out.”

Most of the USMNTers of that era stepped away from bigger salaries and higher levels of play overseas in order to come home and help launch this new venture. Upon arrival, many encountered bare-bones facilities and the tumultuous daily environment of a shoestring startup. The biggest stars among them were handed additional hefty promotional duties above and beyond their teammates’ responsibilities. They were generally more than happy to deal with all of that.

“We had played in Europe or played in World Cups and Olympics and things like that, but never had a top league in America that fans came out to support,” said Clash mainstay John Doyle. “And that was really the thing that we all kind of looked at. We were just grateful and excited to play.”

Imported luminaries like Carlos Valderrama and Roberto Donadoni were key to raising the level of play and visibility. Most of those came and went, however. It was the USMNTers who truly bought in and stuck around for the long haul. Many of them continue to work in the sport today.

“Because there were so many things to complain about, you would always get the, ‘come on, just shut up and play the game and we’ll handle that and that will get better.’ There was always that feel,” recalled Wynalda. “But it was just guys like Tab and John, Marcelo [Balboa], Alexi, Burnsie [Mike Burns], all we wanted in our coming back was to see a league of our own and see that opportunity for our country to enjoy everything that this league has become now.”