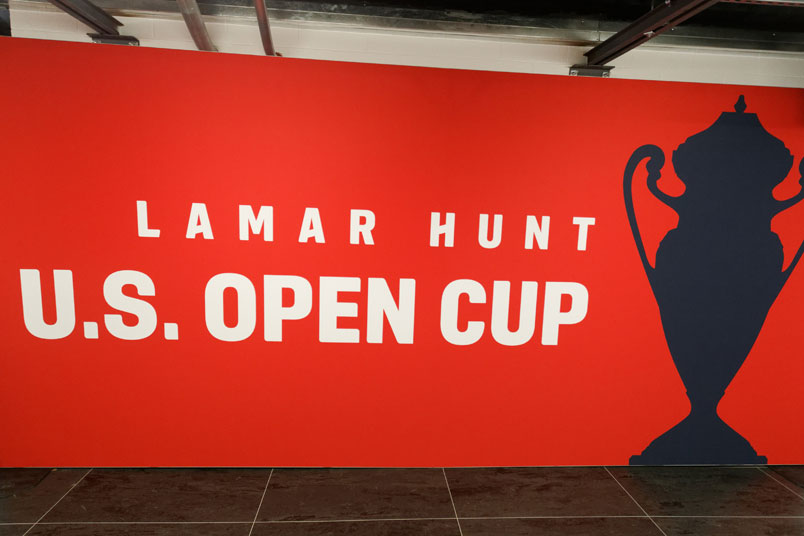 By Charles Boehm – WASHINGTON, DC (Apr 3, 2020) US Soccer Players – American soccer has experienced ample adversity, strife, and disruption over the years. Leagues have folded. The game’s place in the nation’s sporting culture has ebbed and flowed. Through it all, perhaps the only constant has been the Lamar Hunt US Open Cup, the longest-running competition in the nation and the second-oldest continually-operating tournament in the world. That distinction is now under serious threat thanks to the coronavirus pandemic.

“World War I, the Spanish flu, the soccer wars (the feud between the American Soccer League and the United States Football Association in the late 1920s), the Great Depression, World War II – and in none of those instances does it appear that the Cup missed a beat,” Steve Holroyd, a longtime soccer historian and director of the Society for American Soccer History, told USSoccerPlayers.com this week.

At my request, Holroyd sifted through the competition’s 107-year history to seek any sort of situations comparable to the suspension of this year’s tournament due to the current national shutdown. And there seem to be none.

“There might have been less participation during the wars, as some teams couldn’t fill sides. During the soccer wars, the ASL teams didn’t enter. And with the Spanish flu [which killed more than half a million Americans], it doesn’t look like it was referenced at all,” he added. “It doesn’t look like it slowed the tournament down a bit, and of course that might have been because understanding of disease not being quite what it is today. People figured ‘what could possibly go wrong, we’re outside and if you’re sick you’re not playing, full steam ahead, what’s the problem?’ This does look to be completely unprecedented.”

As of now, the US Soccer Federation has only “temporarily suspended” the 2020 Open Cup, slated to be the biggest edition in the modern era with 100 teams. Under this year’s new schedule, the first three rounds would finish by the end of April. Suspension was an obvious and unavoidable move given that pro leagues have done the same with their schedules and are also under training moratoriums. The fourth-tier NPSL canceled its season entirely.

A federation source told me this week that as long as the leagues’ timing remains up in the air, the Open Cup’s fate will, too. That person added that a reduced version of the tournament could be on the table, with the Open Cup committee making a final decision. With every passing week further compacting the space on the calendar, however, it’s not hard to deduce that the Open Cup is a likely casualty.

Last month The Athletic’s Jeff Rueter reported that USL has requested to withdraw from this year’s tournament “in order to prioritize the rescheduling of regular-season matches.” MLS’s stated desire to play a full 34-game league slate, even if it pushes the postseason deep into December, may force a similar move by the topflight. Midweek fixture dates, long a necessary evil for both leagues, are set to become more crucial than ever.

As the founder and senior editor of The Cup, Josh Hakala has just about seen it all when it comes to the Open Cup. He believes that holding this year’s edition in some form or fashion is a test of commitment for the fed, whose relationship with their own, oft-marginalized event can safely be called a complicated one.

“It seems like they could salvage it and do something just to keep the streak alive. It’s the one thing it’s got going for it, the fact that it’s the second-oldest continually running tournament in the world. And who knows, maybe the Irish Cup will bail and we can be the oldest? I don’t even know if the Irish Cup knows it’s the oldest tournament,” he told USSoccerPlayers.com with a chuckle.

Hakala noted that the 1996, 97, and 98 editions of the Open Cup final happened after MLS Cup, which suggests that pushing back this year’s schedule is not out of the question, especially if the final was held in a warm-weather location.

He and his colleagues on the site have offered “a modest proposal” for salvaging 2020. Based on the idea of a “cup winners’ cup,” the top 2019 finishers from the country’s various leagues and tiers would be grouped into a compact bracket with most matches in August. There’s the possibility of MLS league matches doing double-duty as cup games too, a tactic with historical precedent.

“It’s sort of not completely open, but it’s still an Open Cup. There’s still a team from the open division so you still get the amateur teams in there, and you get the pro teams and you get the top-level teams,” said Hakala. “I passed it along to the people at the federation. I’m sure that they’ve thought of this. I’d like to think that they have thought of this, but I have been covering this tournament for 18 years so I don’t take anything that the federation does for granted…. This would be a good barometer for how much it really means. Because I feel like there’s so many different ways that you could make this work.”

Clearly the ravages of a global viral pandemic have far deeper and more important consequences than a soccer tournament, or any sporting event, for that matter. Everyone involved here has little choice but to sit and wait to see what amount of soccer, if any, the evolving circumstances will allow to happen.

That said, when examining the competitive aspects, canceling the 2020 US Open Cup might create as many headaches as it solves. With the winner qualifying for the Concacaf Champions League, there are international aspects to consider. Even if you set aside the value of history and tradition, the event holds a special unifying place in the American game’s chaotic and contentious overall landscape.

“If they do cancel the Open Cup in its entirety, do you give it to last year’s champion? Do you give it to last year’s runner-up, maybe? Do you just skip it and give it to the second-place Supporters’ Shield [finisher], find some way to give it to yet another MLS team?” pondered Holroyd. “No one’s going to be satisfied, because particularly the anti-MLS, anti-USSF element has really embraced the Open Cup as the pure soccer championship in this country, and if it doesn’t get its due in next year’s Champions League, it’s just going to give a small but nevertheless vocal contingent in the US soccer community another reason to just check out of MLS and hate the system.”

Still, sports have been sidelined by acts of God and humanity before. Losing the Open Cup may be just another sign of the uncharted territory we’re all in.

“Major League Baseball canceled a season, didn’t have a World Series. Hockey missed an entire season. Admittedly, that was because of labor disputes, but we’ve seen venerable competitions not finish in the past,” said Holroyd. “In those other examples, it was man-made, you know, labor strife or what have you, or leagues folding. This would be the first because of a pandemic. What do you say? It’s the new normal.”