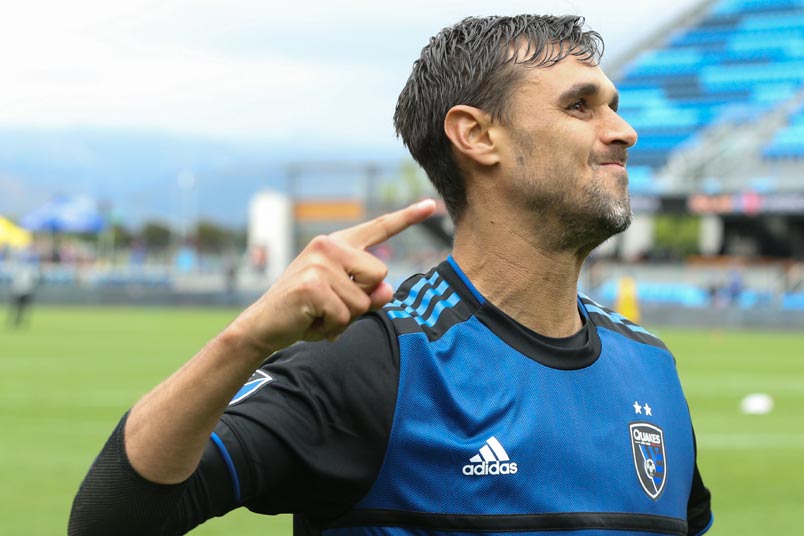 By Clemente Lisi – NEW YORK, NY (Apr 13, 2020) US Soccer Players – Our look back at the last quarter-century in MLS continues by highlighting the best regular-season games in league history. For a league that’s relatively young, MLS has packed a lot of passion and emotion over a short time.

MLS has had its share of superstars from North America as well as across the globe. Some of the best games in league history have included US stars like Clint Mathis, Landon Donovan, and Jozy Altidore. Foreign-born stars like David Beckham and Juan Pablo Angel also made enormous contributions, while also removing the stigma that players from Europe and South America chose to play in MLS for easier competition in their twilight years.

It’s no shock that teams like the Los Angeles Galaxy and the MetroStars-turned-Red Bulls feature prominently on our list, as does the Northwest rivalry between Seattle and Vancouver. Not to be outdone, smaller market teams like the San Jose Earthquakes and Colorado Rapids also make the cut.

The league’s first game ever took place on April 6, 1996, with the San Jose Clash hosting DC United. The nationally televised event attracted a sellout crowd of 31,683 to Spartan Stadium with Eric Wynalda scoring the winner with two minutes left on the clock. It was ultimately not among the best games ever played in league history, but did get the ball rolling on a league so many Americans now love. It also set a standard, with late goals a big reason so many games making this list. Here’s a look back at the best six games from the MLS regular season since 1996.

The MetroStars debut at Giants Stadium involved much fanfare and anticipation. Before a crowd of 46,826, the MetroStars welcomed a soccer league back to the Meadowlands for the first time in 12 years following the demise of the NASL and the legendary Cosmos. The match was overall a dour affair. The MetroStars, without midfield superstars Tab Ramos and Roberto Donadoni, and Revolution played a tactically tentative game. What resulted were stretches of dull play and little offense. In the end, the game ended 1-0 for the Revs. It’s a result that resonates on the Jersey side to this day.

Back in the era of the countdown clock, New England scored in the game’s dying seconds. MetroStars goalkeeper Tony Meola initially saved a shot by Darren Sawatzky, only to see an own goal ruin the scoreless draw. The MetroStars’ Nicola Caricola, a former defender at Juventus, was standing just a few yards in front of the goal when he mistakenly knocked the ball into the net. The play became known as the “Curse of Caricola” and the reason some fans believe the MetroStars/Red Bulls have never won an MLS Cup.

The league’s third season gave us the combined highest-scoring game in MLS history, a record that stands to this day. The Galaxy scored seven goals in a game it was never at risk of losing. With the game tied 1-1, Cobi Jones gave the Galaxy the lead in the 24th minute. They never looked back.

Jones scored in the 27th and 53rd minutes, to complete the hat trick. Colorado goalkeeper Paul Grafer, meanwhile, was on the losing end of things at the Rose Bowl. The star-studded Galaxy, coached by Octavio Zambrano at the time, featured some amazing players in those days, including Jones and fellow USMNT regulars Clint Mathis, Paul Caligiuri, Greg Vanney, and Robin Fraser.

The Quakes and MetroStars combined for ten goals in one of the most exciting matches in league history. Unlikely hero Cornell Glen scored twice and added an assist to help rally the MetroStars in his first MLS start at Spartan Stadium. Glen’s goal in the 90th minute, off a cheeky backheel, salvaged the game for his side and capped off a thrilling contest. Amado Guevara had started the MetroStars’ comeback after scoring a penalty kick to put them within a goal after Earthquakes defender Jeff Agoos had fouled Glen in the box.

Glen, a native of Trinidad & Tobago, scored his first league goal in the sixth minute after intercepting a Brian Ching pass. He would play just one season with the MetroStars before going on to a journeyman MLS career with FC Dallas, Columbus Crew, Colorado Rapids, Los Angeles Galaxy, and the San Jose Earthquakes. Glen, who is now 39, continues to play professionally in T&T.

Year one for David Beckham in LA and the hype that surrounded his visit to other MLS venues that season. The game on August 18 at Giants Stadium did not disappoint. The humidity did nothing to stop the energy displayed on the field before a crowd of 66,000.

The back-and-forth affair saw three different players scoring twice. Jozy Altidore and Juan Pablo Angel got two goals each for the Red Bulls, Carlos Pavon scoring twice for the Galaxy. With the score knotted at four, the game seemed destined for a draw. Instead, an Angel goal in the 89th minute, following a 30-yard shot by Mathis that was thwarted by goalkeeper Joe Cannon, sealed the win for New York.

One of the other Cascadian rivalries breathed new life and energy into the league as it entered the 2010s and the expansion era. Given the regional animosity, it’s not much of a surprise that one version of the Seattle vs Portland vs Vancouver rivalry made our list.

Vancouver forward Eric Hassli’s golazo highlighted the 2-2 draw. His incredible half-volley from the right-sided edge of the penalty area in the 85th minute beat Kasey Keller to tie the score. It is, without a doubt, one of the greatest goals ever scored in league history.

Great games have to include great players and this is why this match from the 2019 season makes the cut. Although the Quakes’ win over the Fire turned out to be a lopsided affair, it featured a four-goal performance by striker Chris Wondolowski at Avaya Stadium.

Wondo’s four goals didn’t just give his team a victory, it also lifted him to 148 regular-season goals, passing Landon Donovan’s previous all-time record of 145. After the game, Wondolowski, asked about breaking the record, said: “It’s looming just cause it’s there, but to be honest this year has been so much fun. I think that this coaching staff and this locker room have reignited that passion and a love for the game and I’m just enjoying it out there. I’m going out there not to score goals, I’m going out there because it’s fun.”